Surveyed on the sly by Samsung in the spring of 2022, the QD Oled S95B TV series has had tremendous commercial success since the start of the new school year, according to market research and analysis firm Omdia. So much so that Samsung is considering a different strategy for 2023 with the desire to ostensibly bet on QD Oled technology and position it at the very top, or almost, of its range.

The S95B TV series had a launch that went under the radar (click on the Samsung QE55S95B reference to discover the complete product test by the AVCesar.com editorial staff and on the following link, TV Oled Samsung S95B, the Quantum revolution Dots, to discover in detail the QD Oled technology signed Samsung Display), that is to say without drums or trumpets giving the latest products from the Korean manufacturer a low reputation with the general public. In 2022, the Samsung Visual Display division responsible for defining the brand's TV range and its commercial strategy was still mainly focusing on its Mini LED Neo LCD TV range QLED Ultra HD 4K/8K and QLED UHD 4K.

Launched a little later, in the summer of 2022, the Sony A95K QD Oled TV series based on the same Samsung Display QD Oled TV panels was positioned by the Japanese manufacturer at the very top of its TV range. The reception was excellent, on the part of the media on the one hand, resellers/distributors on the other hand, consumers then with a significant sales volume, very close to that of Samsung, in September. At around the same time, from July more precisely, the production line of QD Oled panels signed Samsung Display reached a yield of over 80% (see our news QD Oled Samsung Display panels, yield of 85% ), which prompted Samsung to change gear to absorb this additional supply of QD Oled panels expected later.

The Korean giant has therefore decided to lower the prices of its S95B TVs to be sure to sell QD Oled televisions, and avoid an overstock situation at Samsung Display. And the success was immediate with sales multiplied by almost four and a half (i.e. approximately +350%), while sales of QD Oled Sony TVs fell sharply (see Omdia graph below). Similarly, the success of the Samsung S95B screens in the high-end TV segment led to a decline in sales of the Samsung Neo QLED Mini LED TV series. 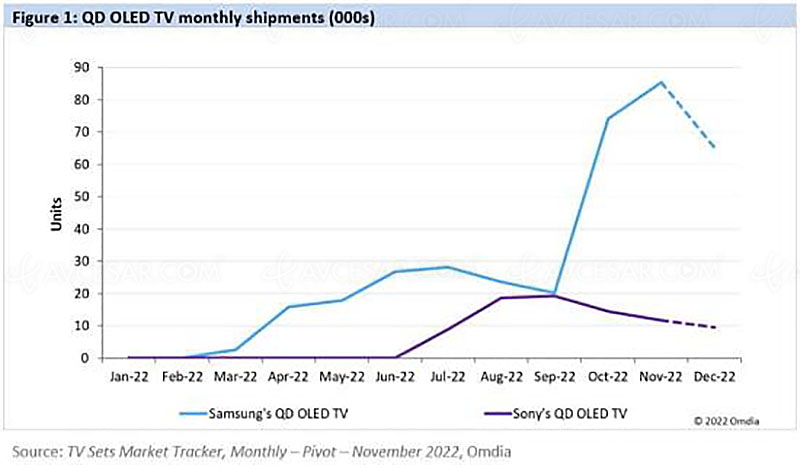 Other evidence of Samsung's change in strategy with its QD Oled TV series: the group aims to sell 1 million units compared to 400,000 in 2022; finally, if Samsung has raised its QD Oled TV commercial target, that of Mini LED TVs remains the same for the year 2022.

Last precision, Omdia forecasts QD Oled TV sales up 141% in 2023 compared to 2022. Similarly, the research firm announces that TCL, Philips and Sharp will join the camp of QD Oled technology supporters in 2023 (Editor's note: if TCL announced its intention to market a QD Oled TV at the end of 2023 at the start of CES 2023 at the beginning of last week, it finally reconsidered its words at the end of the show, see our CES 23 news > TV QD Oled TCL in 2023, full reverse: release cancelled!). 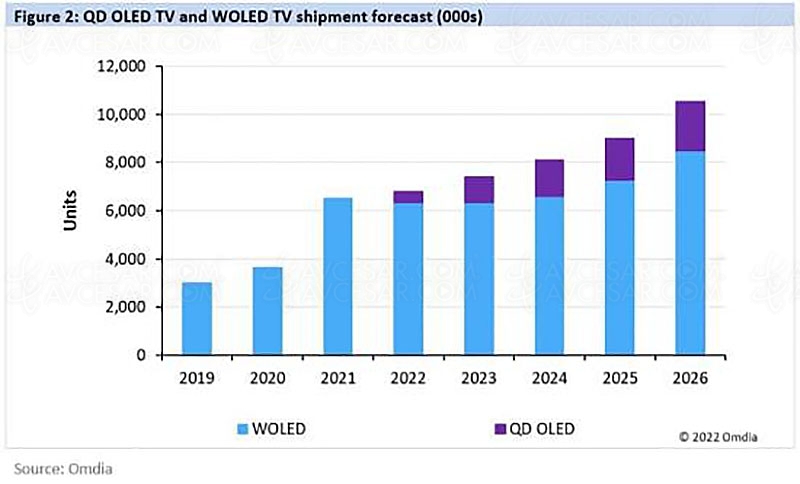