The Chinese manufacturer therefore presented its Ultra HD 8K Mini LED televisions this morning. Two series are on the program, the TCL X925 and TCL X925 Pro. We present the latter in detail before returning to the second in a later article.

The X925 Pro series has a single reference, the TCL85X925 Pro. Flagship of the manufacturer, it takes the specifications of the 85X12 unveiled in China in the city of Lingxi last March (see our CES 21 news> TV Mini LED Ultra HD 8K QLED TCL 85 '' with OD Zero technology). 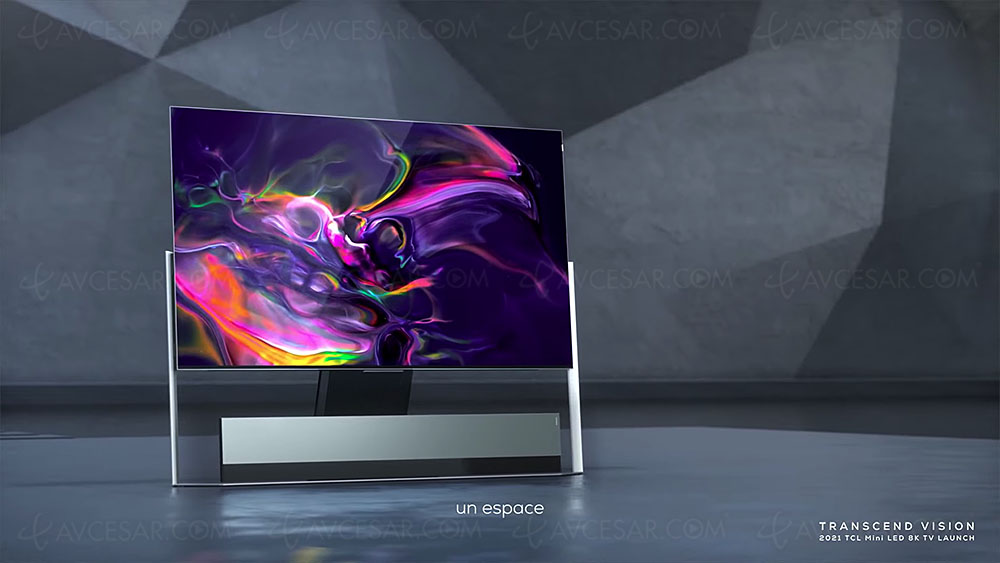 OD Zero, kesako? Ultra HD 8K Mini LED model, the 85X925 Pro (85 '', 216 cm) television will be the only one in the TCL 2021 range equipped with OD0 technology. As a reminder, the latter designates the latest generation of backlighting from the manufacturer for a screen fineness never before achieved on LED LCD televisions. This is largely due to the size of the diodes used, infinitely smaller than those on board the TCL C825 specimens for example, 152.4 µm against 225 µm (and 1600 µm on the first specimen of the genus signed TCL, the 65X10 appeared in 2019). 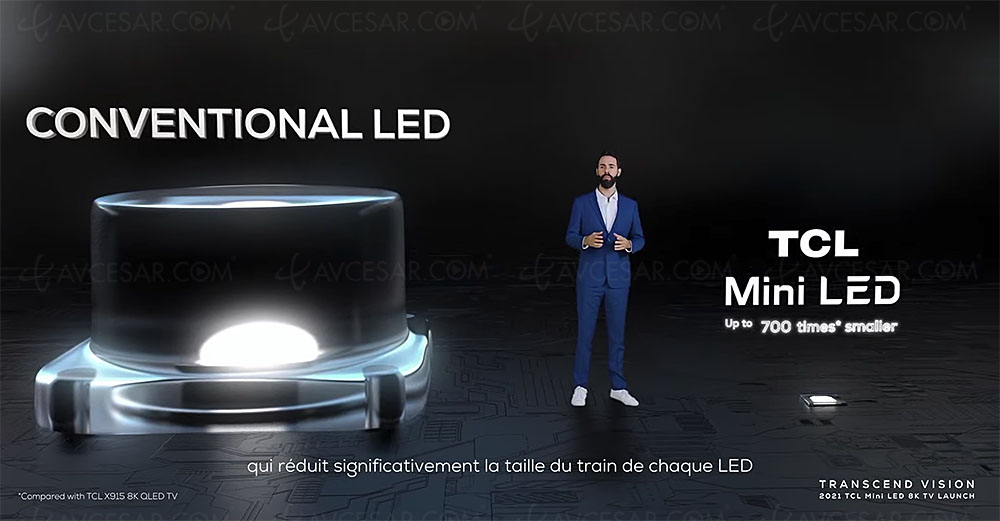 To go further, OD is the abbreviation of Optical Distance, or the distance between the backlighting system and the screen. In the context of an OD Zero process, this is minimal, close to zero. And it is this technical characteristic that allows the TCL 85X925 Pro to display a thickness of only 9.9 mm, a real feat for an LCD screen. 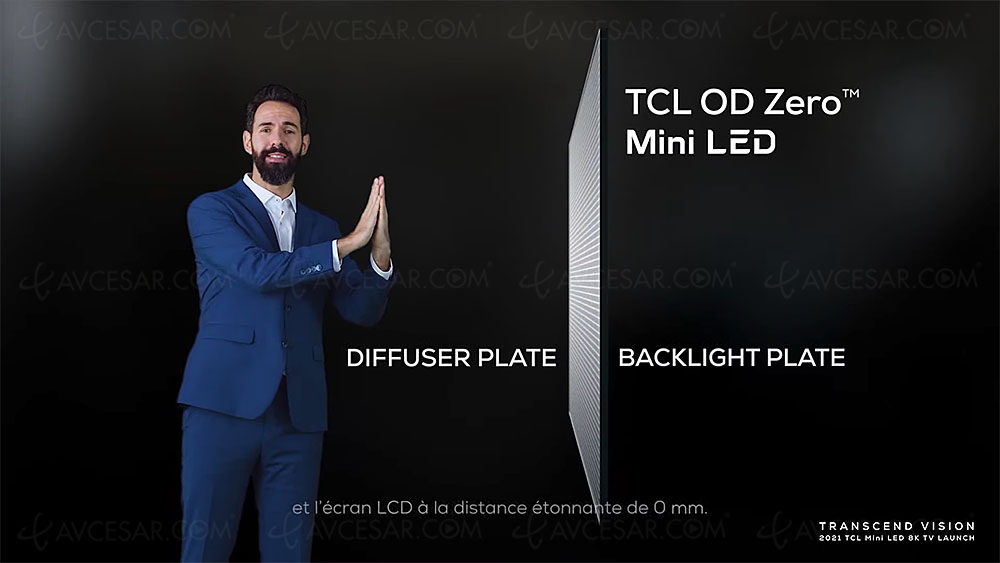 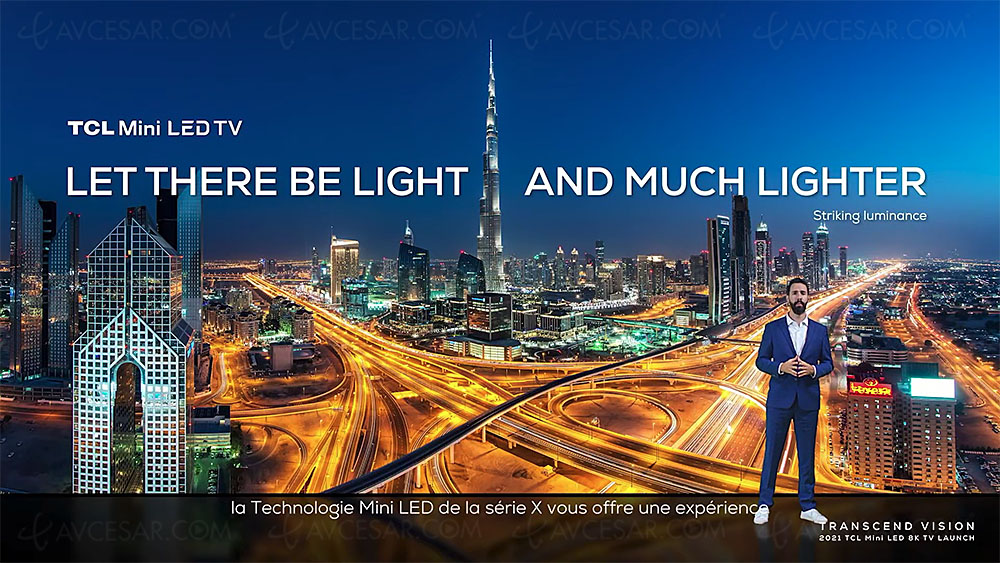 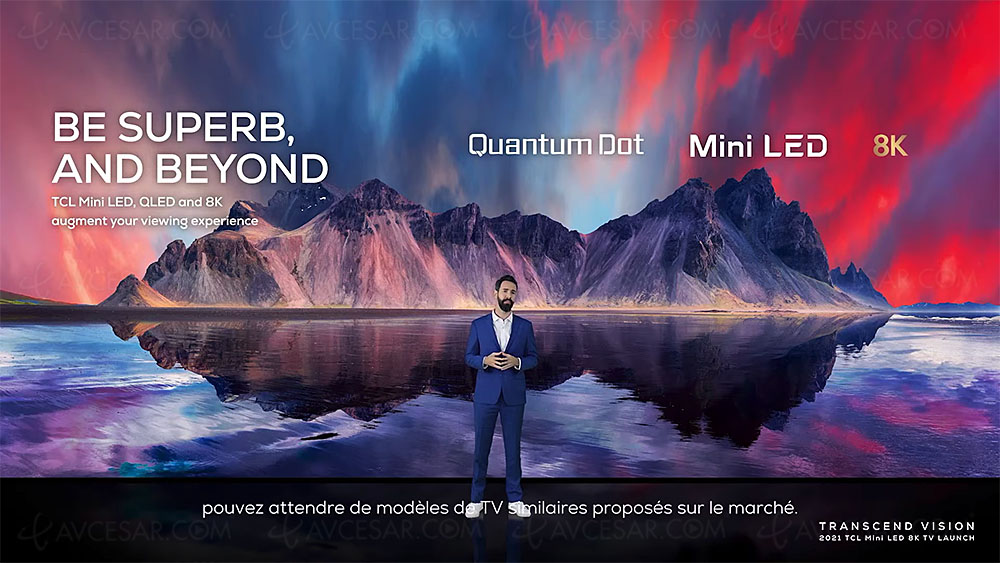 5.1.2 and 160 W sound The audio section consists of a 5.1.2 system in the form of an Onkyo sound bar accompanied by a subwoofer housed in the TV stand (see photo below). Dolby Atmos compatible, it is equipped with 25 speakers (including a subwoofer with a capacity of 7 liters) for a total power of 160 watts. 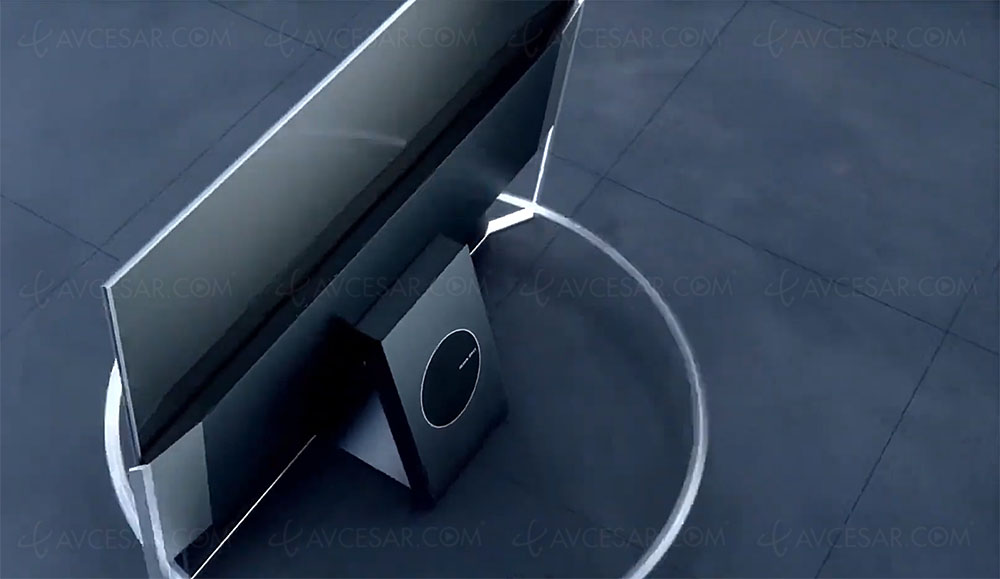 Gesture control In addition, the TCL 85X925 Pro is equipped with a motorized ToF 3D 48 Mpxls camera, the first of its kind, for gesture control of the TV through the on-board AI module. It is thus possible to activate the fast forwarding of a streaming program with a simple hitchhiking gesture (see photo below). Likewise, the latter can analyze with precision the observation posture and the distance of the person to adapt the image settings accordingly. Finally, the Google Duo embedded application (see second photo below) allows visual conversations with family, friends or acquaintances. 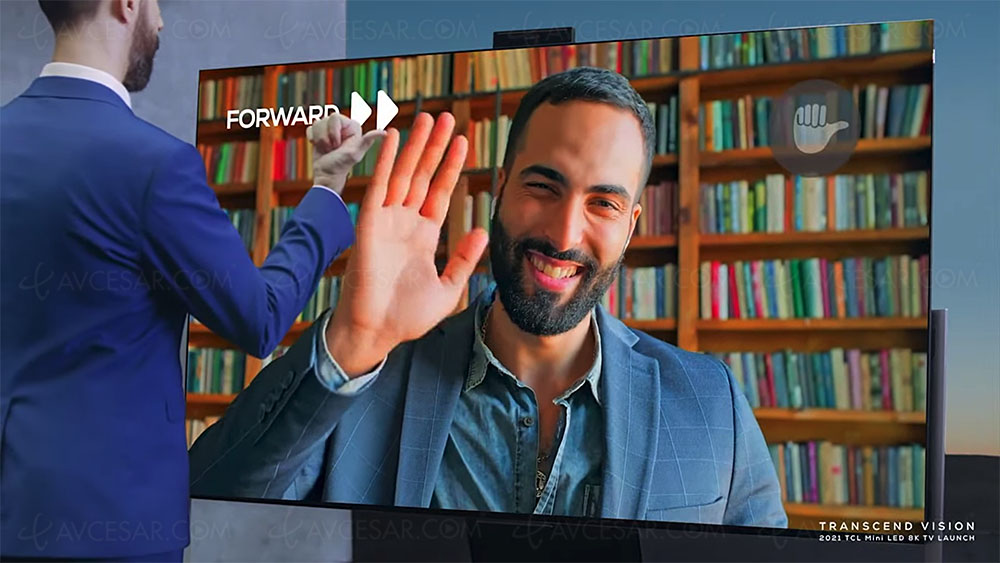 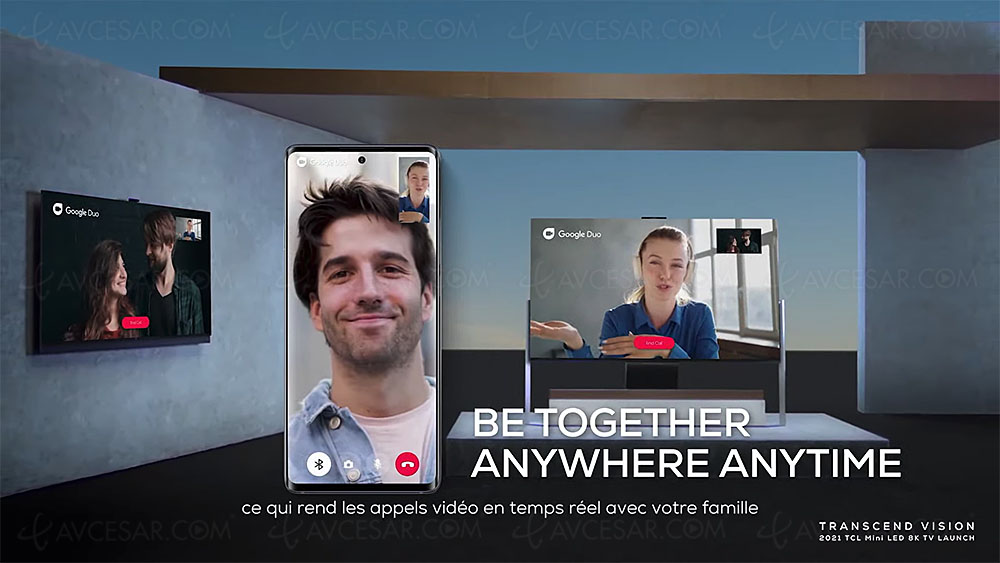 Smart Google TV The TCL 85X12 TV is equipped with the Smart Google TV function. For connectivity, it is the Wi-Fi 6 function which is in addition to Bluetooth. Finally, the Imax Enhanced certification is also present, the same for the Works with Alexa label (Amazon Echo type speaker compulsory for voice control of the TV). 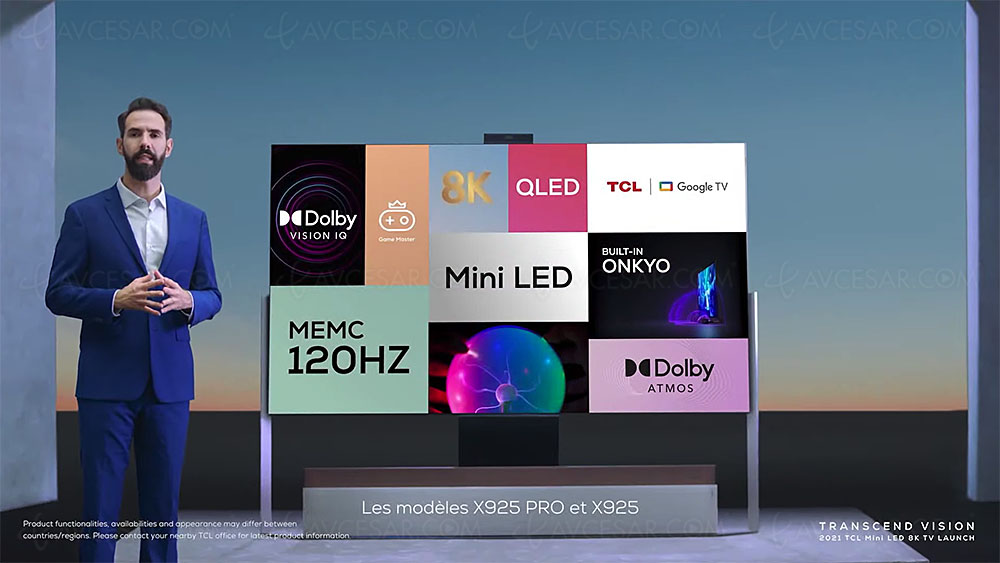 Availability announced for the end of the year . Indicative price still unknown. 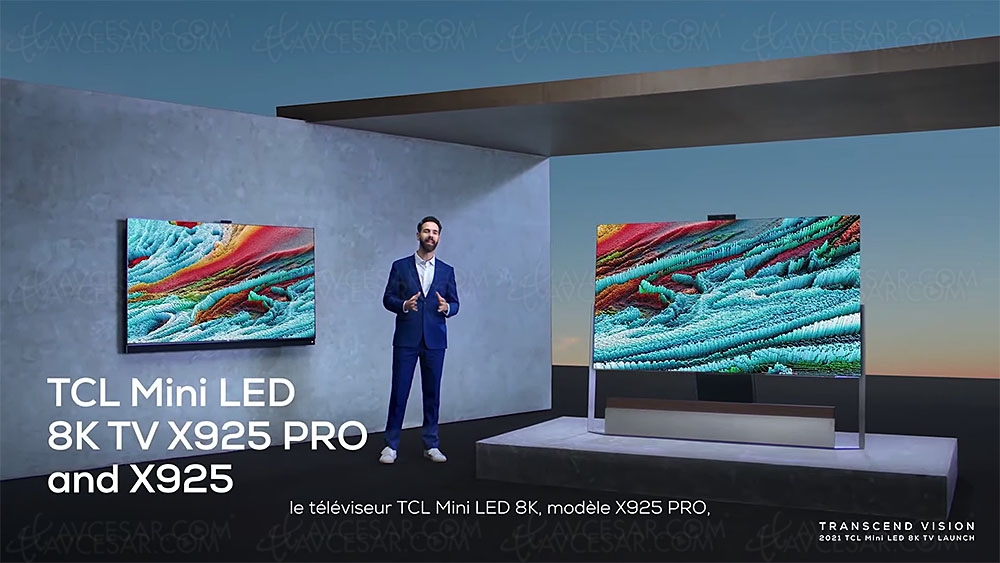