The latter, like the Philips OLED935 it replaces, therefore has three references, the Philips 48OLED936, Philip 55OLED936 and Philip 65OLED936. 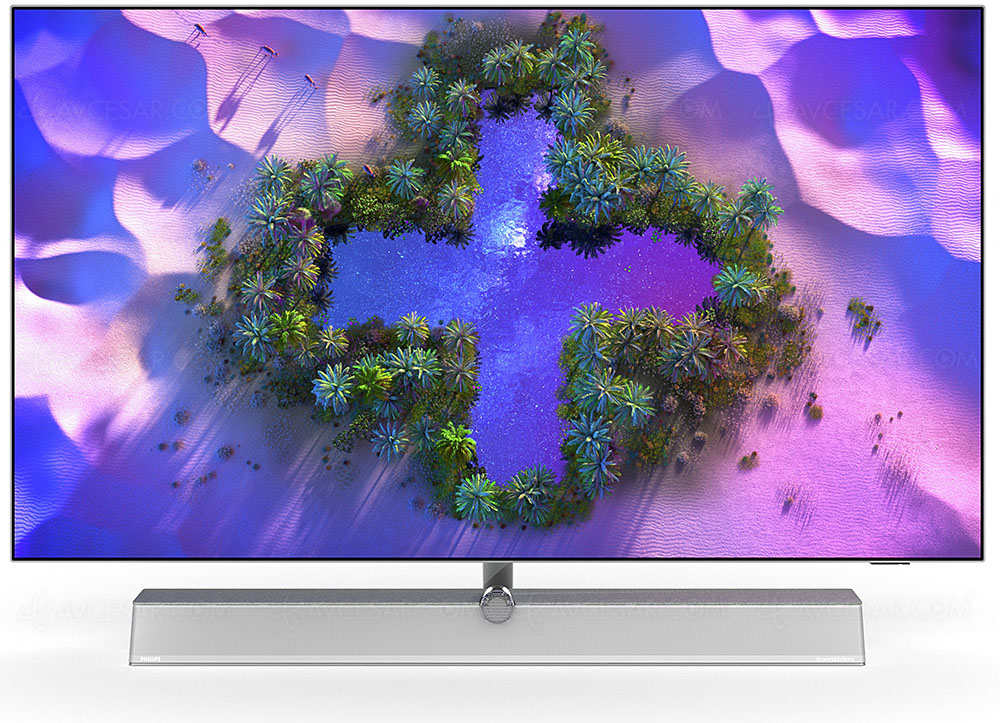 New features compared to last year's references, and even compared to the Philips OLED806 televisions presented earlier this year (see our news Philips OLED806 4K Ultra HD Oled TV: 48 '', 55 '', 65 ' 'and 77' 'on approach), are numerous. First, there is the new generation Oled panel offered by LG Display (the one available on the Oled LG G1 said Evo TVs). The latter delivers up to 20% more light output depending on the displayed image. We also note the HDR10 + Adaptive compatibility which, as a reminder, uses the data provided by the TV light sensor to adapt the image to the environment. Thus, whatever the ambient conditions, the broadcast image will always be of optimal quality. 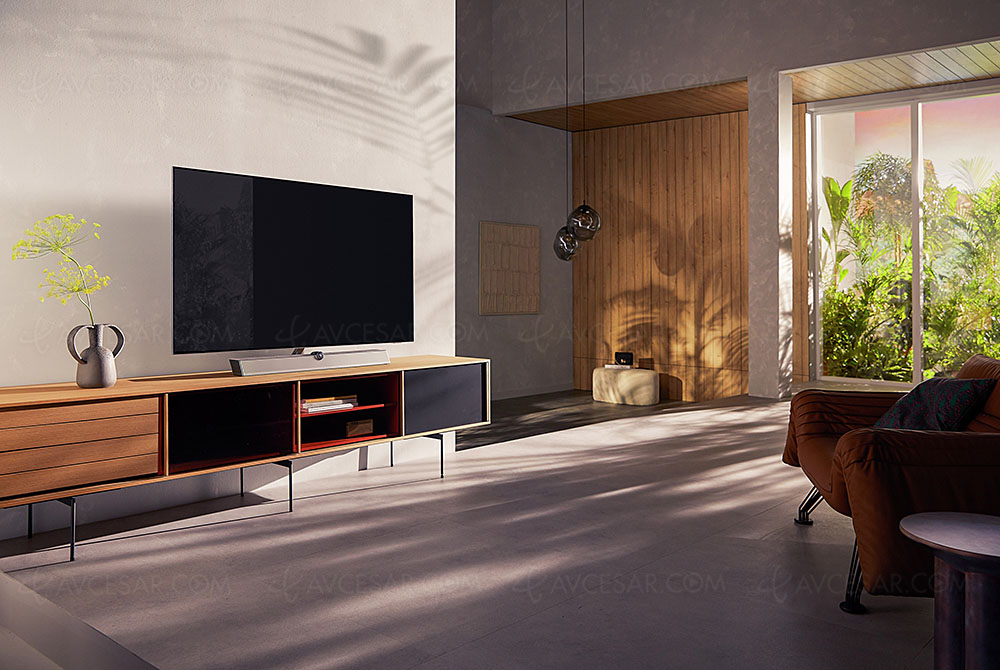 Another notable development, and because Oled technology is always subject to the phenomenon of Burn-in (especially during video game sessions, very aggressive content in terms of brightness), the presence of the anti-marking function designed by Philips based on a division of the screen into 32,400 zones in order to precisely detect the static parts of an image to gradually reduce their light intensity. This very efficient process is added to the functions embedded in LG Oled TVs for unparalleled peace of mind. Philips announces that this feature eliminates 95% of the risk of branding (including logos and gaming info). Associated with an Input Lag of only 11 ms, Philips Oled TVs could well establish themselves in 2021 as the best of their kind for video games. Especially when the year specifies that the management of Freesync Premium and G-Sync is part, ditto for the HDMI 2.1 connectors with a bandwidth of 48 Gbps, VRR (active from 48 Hz to 120 Hz), ALLM and Auto Game mode. 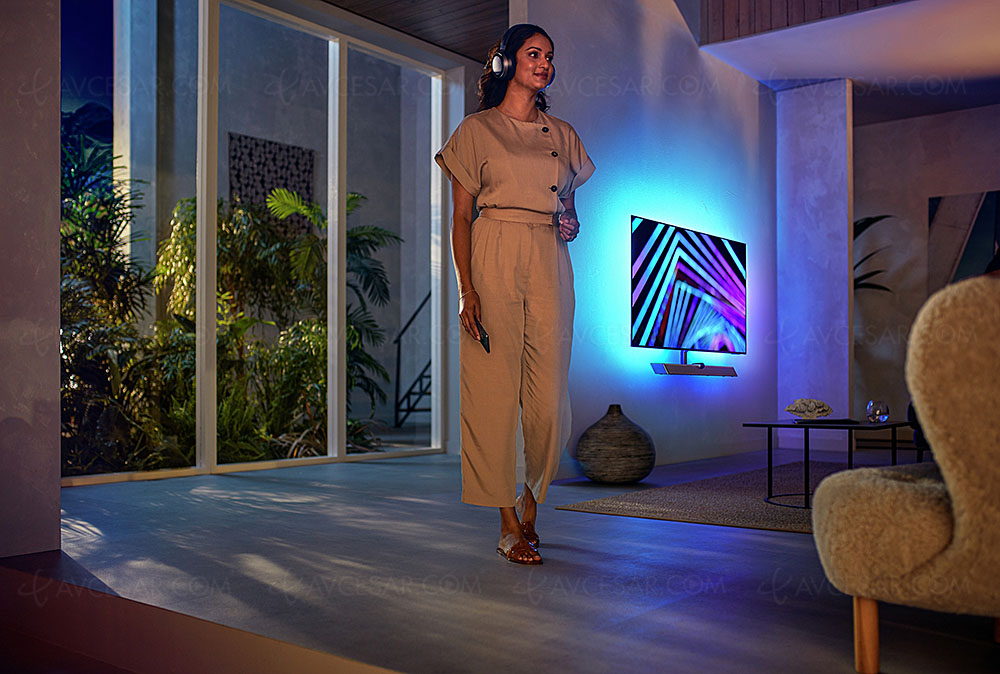 Among the novelties of Philips OLED936 TVs, we still notice the Calman Ready function for an extremely fine calibration of the screens and the FMC function (Fast Motion Clarity equivalent to a BFI mode for Black Frame Insertion) for the insertion of black image without flickering effect according to Philips, for extreme fluidity and sharpness of moving images. It will be necessary to check whether its activation does not lead, as for LG TVs, to a significant darkening of the image.

But the most spectacular change proposed by the Philips OLED936 TVs is the presence of a brand new P5 Dual Engine processor, different from that present in the Philips OLED806 and Philips OLED856 televisions unveiled at the beginning of the year. The one embedded in the OLED936 TVs consists of two chips to significantly increase its computing power and thus proposed several new algorithms. The first is called AI Smart Bit Enhancement 2.0 and aims to reduce the phenomenon of Banding on SD images without loss of details thanks to an internal 14-bit conversion (like the Super Bit Mapping process signed by Sony). The second is called AI Machine Learning Sharpness and allows increased sharpness on only part of the image, the rest of the screen benefiting from separate settings. This dynamic image management is a guarantee of optimal overall quality. For its part, the Perfect Natural Reality mode is present here in its advanced version: Philips announces a natural sharpness up to 30% thanks to better management of highlights and improved contrast. 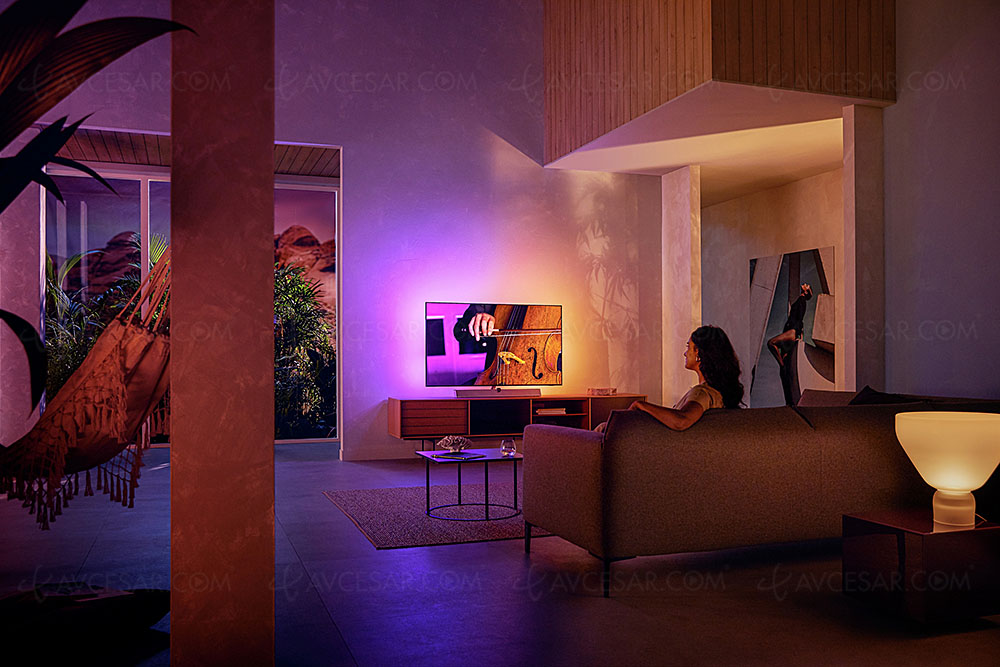 Directly linked to the P5 Dual Engine processor, we can also mention the AI Content Classification and Ambient Intelligence functionalities. The first automatically detects the film content to give the viewer the choice of Filmmaker Mode (no P5 processing activated) or Home Cinema Mode (P5 processing active but in a skilful way so as not to distort the work). The second takes advantage of the data measured by a new light sensor present on the Phiips 2021 TVs to optimize the display of the SDR or HDR signal, and even HDR Dolby Vision via the Dolby Bright mode specific to Philips screens. 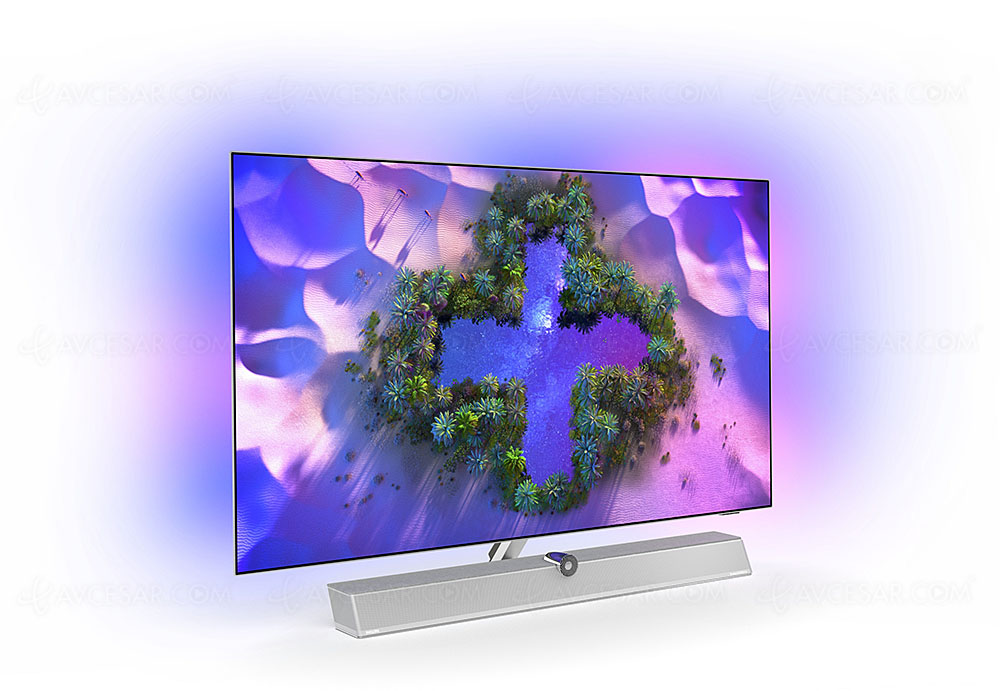 Of course, the brilliant Ambilight process is still in place, but on all four sides here. And it is still possible to combine the TV with Philips Hue lamps for a picture, sound and light show at home. Likewise, compatibilities with HDR Dolby Vision, HDR HLG, HDR10 and HDR10 + / HDR10 + Adaptive technologies are present. 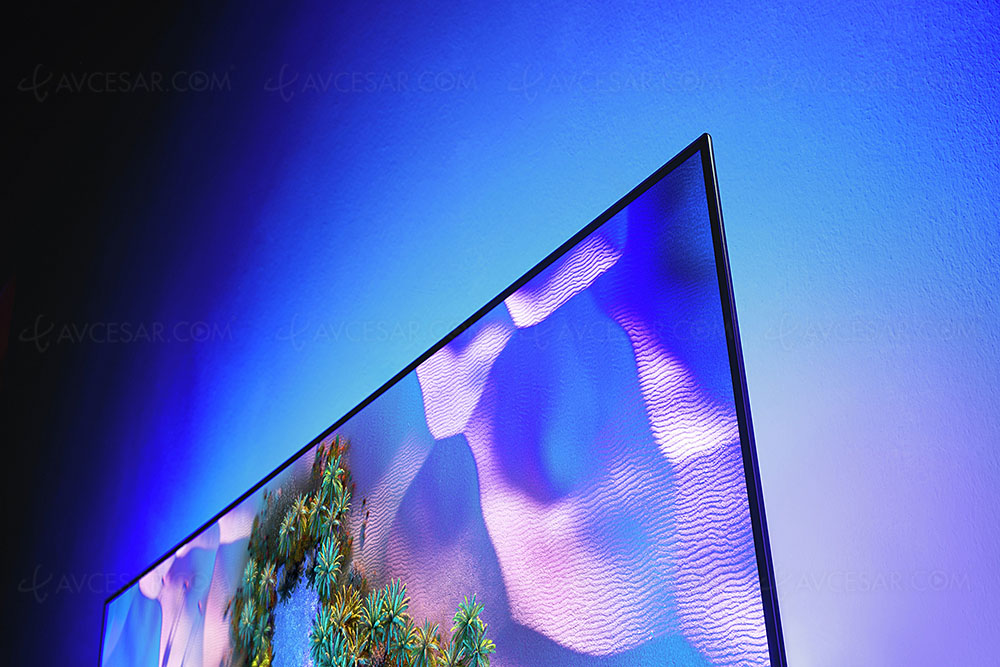 The Philips OLED936 TV audio system, still signed by B&W, is also undergoing significant change. The filtering components are new and of superior quality, the tweeters now benefit from new isolated boxes, the boomer frame is more rigid and its magnet more powerful (same for the four midrange) and the Dolby Atmos speakers have been slightly repositioned. for increased efficiency.

Delivering a total power of 70 W, the 3.1.2 soundbar (separate from the chassis to eliminate sound vibrations that could be transmitted to the screen) in reinforced ABS (fiberglass for extreme rigidity) and covered with a kvadrat fabric is therefore structured around three 19 mm tweeters (decoupled from the speaker for increased performance). The one placed in the center adopts the Tweeter-On-Top configuration (see illustration below), so in the “unaffected” position and slightly above the speaker as its name suggests, benefits from its own rigid metal case. . There are then four 50mm mids, two in the center and the other two at each end of the soundbar. For reproduction of Dolby Atmos soundtracks, two 50mm full height speakers are placed in an Up-Firing configuration on the top of the enclosure to radiate upwards. Finally, a 100 x 65 mm woofer associated with a Flowport vent (exclusive B&W process) is also present, at the top of the case for rich and deep bass. Namely, there is also a Pre-Out output to connect an external subwoofer if needed. 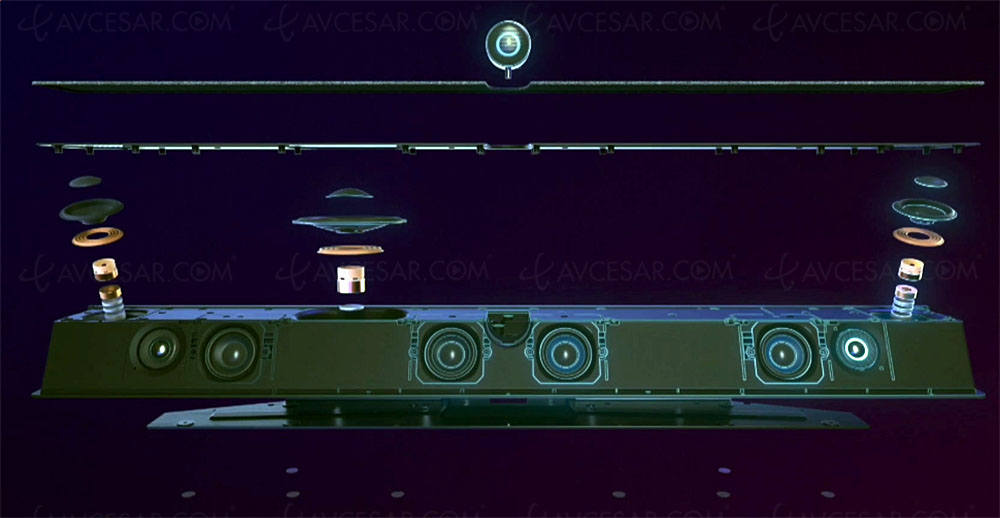 Finally, in addition to the DTS Play-Fi certification (see our Philips and DTS Play-Fi partnership news: televisions, sound bars and wireless and multiroom speakers) allowing the configuration of a 5.1 home cinema system wireless or the integration of the TV into a multiroom system, it is possible via the Movie setting to apply virtual Dolby Atmos processing to a classic audio signal.

The Android 10 Smart TV function is on the program. It of course offers access to the Google ecosystem directly from the TV screen (Google Play Store, Play Movies, Play Music, Google Chrome ...) but also to the Philips App Gallery service to install your favorite applications via 16 GB of Built-in Flash memory (expandable via USB), like a smartphone. Plus VP9 and ChromeCast compatibility to view content from a compatible smartphone / tablet on a large screen, not to mention Google Assistant and the “Works with Alexa” certification (need for an Amazon Echo Dot speaker).

As announced above, Philips OLED936 TVs offer four HDMI 2.1 connectors. An ideal configuration for video game enthusiasts, owners for example of a PlayStation 5 console, an Xbox Series X, and a gaming PC.

Reminder of the key features of the Philips 55OLED936: 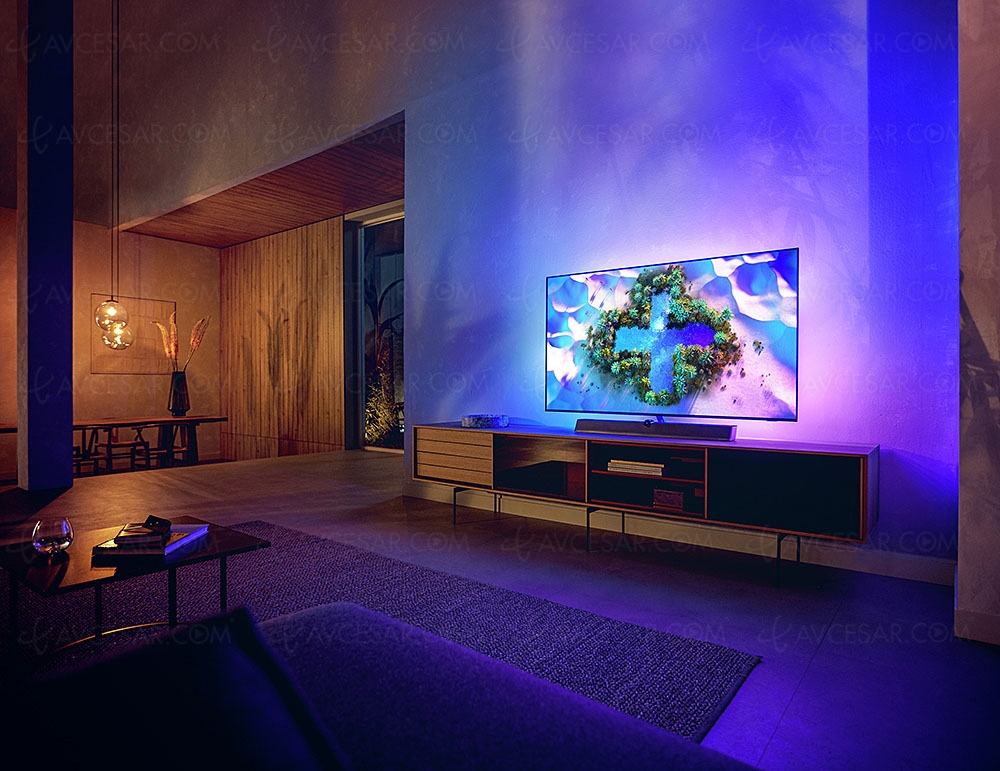