Before going any further in our presentation of The Frame 2021 range, to know everything about the philosophy of the Samsung The Frame TV series, you can click on the following link and discover the complete file on these screens produced by the AVCesar.com editorial staff: From flat screen to TV The Frame, in 20 years Samsung has revolutionized the design of televisions. 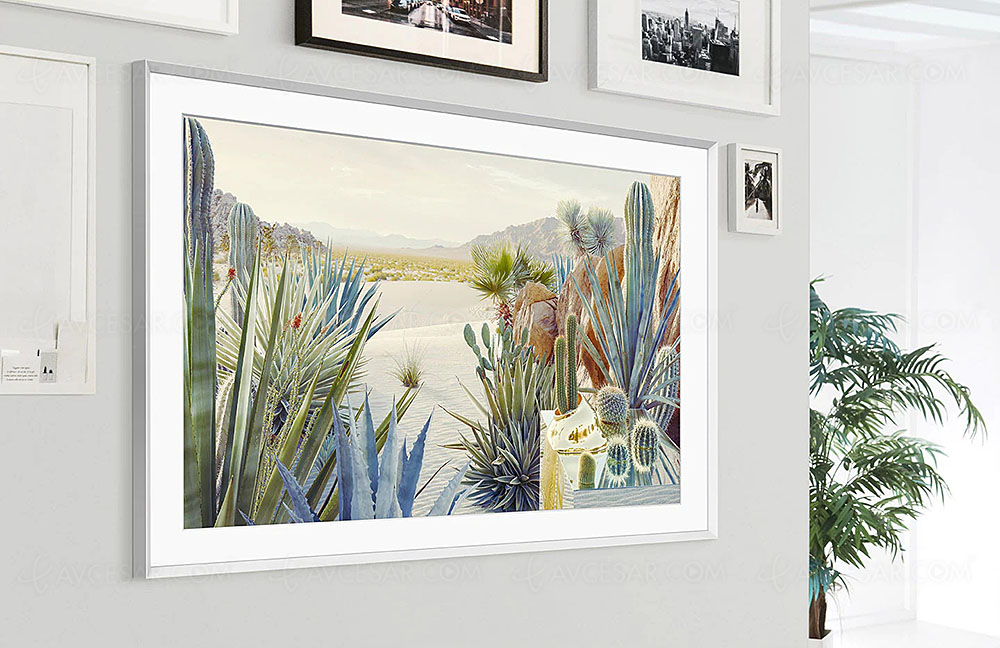 The specifications of the TV Samsung The Frame

In short, in terms of equipment, the Samsung The Frame TVs are very comparable to the 2020 models, with some major differences. In the first place, the design has changed significantly with the possibility of choosing between two types of LCD panel framing, modern (white, teak or walnut color) or bevelled (white or brick red color). Similarly, the thickness of televisions now displays 24.9 mm against 49.9 millimeters. And to top it off and accentuate the picture effect on the wall, a new ultra-thin wall hanger is featured. Last precision concerning the shape of the TV Samsung The Frame 2021, a new base adjustable in height is also proposed to put the screen on a piece of furniture and to place a sound bar under the screen. Finally, Samsung The Frame TVs can now be combined with the Studio stand (easel). 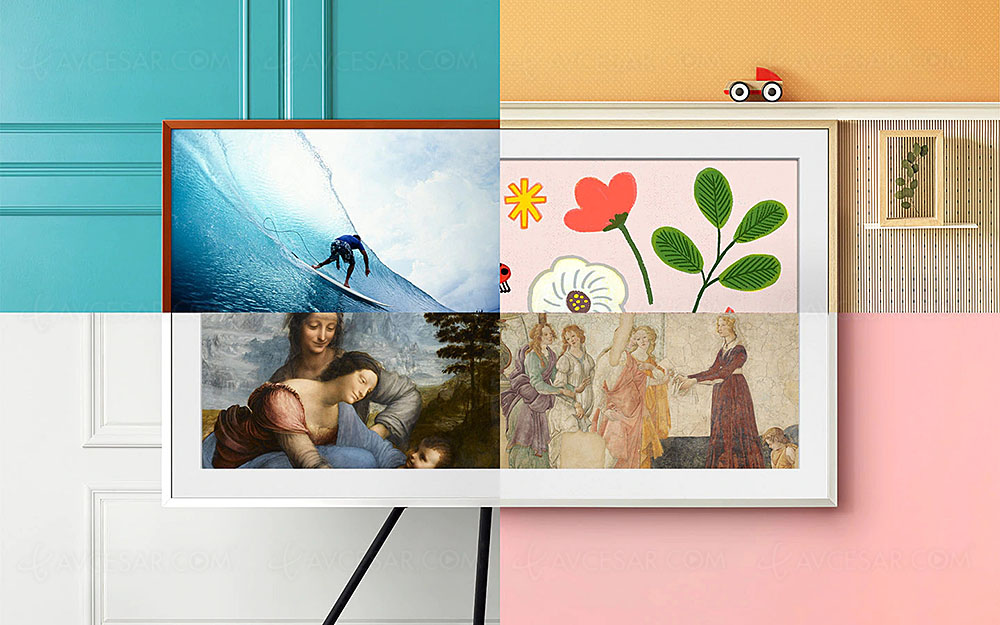 For the rest, we find the Mode Art and Art Store functions (to display photos or works of art from the Prado Museum, for example), the presence of the One Connect box, a 100 Hz display and , above all, a matte LCD panel. The latter offers a perfect photo or painting rendering when displaying works, to such an extent that it is impossible for Mr. Toutlemonde to distinguish the TV in the middle of an exhibition for example. For the rest, QLED TV image processing and Ambient + mode are on the program.

We therefore find a light peak of 500 nits, a DVB-T2 / DVB-S2, DVB-C tuner and the Quantum Processor 4K, year 2021. Of course, all VA LCD panels of the QLED series display 10 bits at counter (10-bit FRC Dithering to be precise, or 10 bits simulated from an 8-bit slab). As on the 2020 vintage The Frame, Dual Led technology is required, i.e. two types of diodes in the backlighting system (see our CES 20 news> Samsung QLED Q60T / Q70T and The Frame: Dual LED to improve contrast and color). 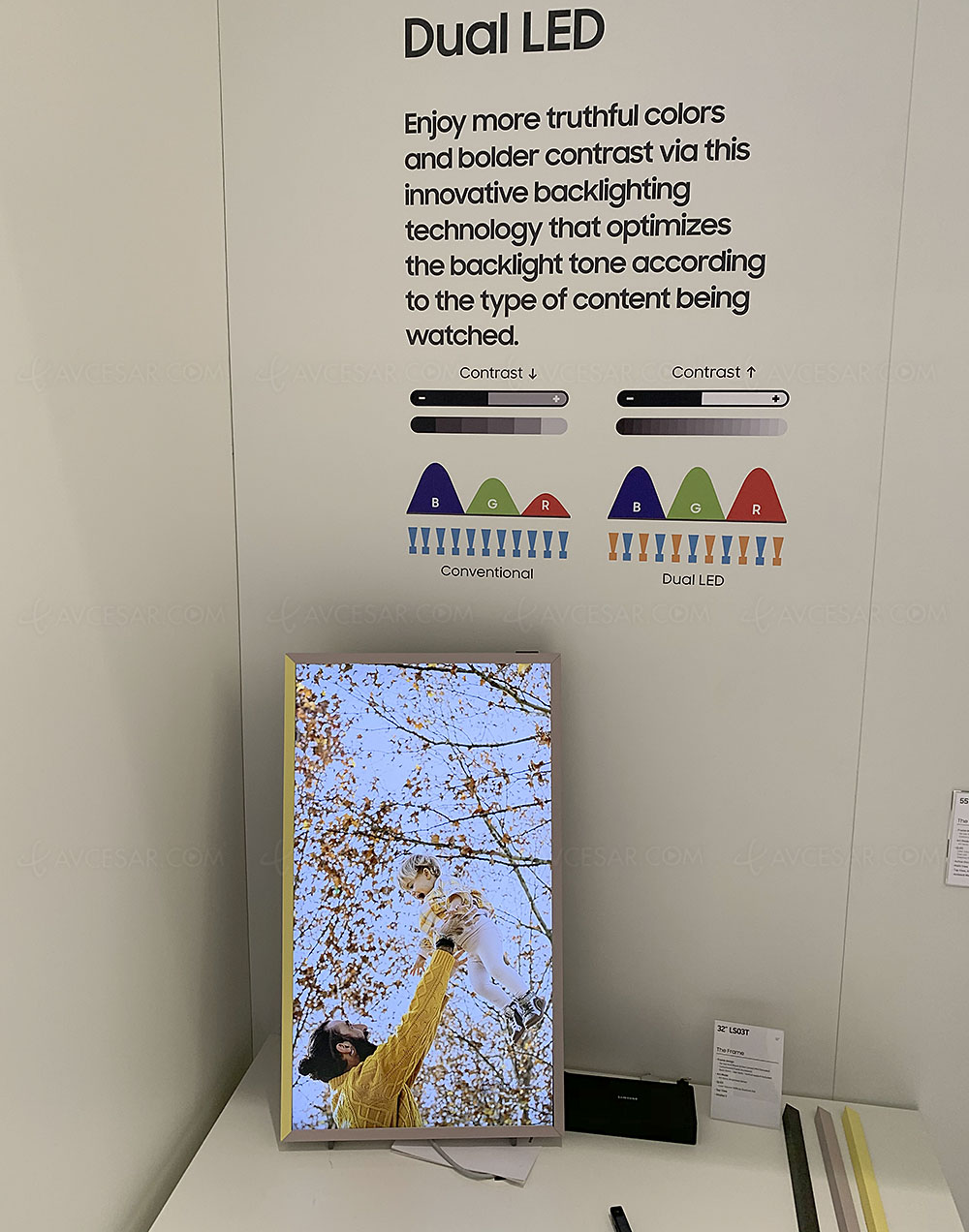 The former display a color temperature of 5,000 ° K and the others 20,000 ° K, allowing appreciable variations in tints (cold or warm) to better match the nature of the displayed image. Thus, these TVs are able to adapt more easily and more effectively to the different contents appearing on the screen. We also note the presence of real Quantum Dots nanocrystals for improved color performance (100% Color Volume) in red and green shades, as well as an extended gamut.

Of course, HDR10 + (High Dynamic Range) and HDR HLG compatibilities are on the menu. Finally, the Adaptive Picture function now adjusts the brightness but also the contrast (and this is new) of the TV according to the ambient light (presence, new, of a light sensor).

The goal of Ambient + mode, among other things, is to "disappear" the screen in a room. Using the dedicated application, all you have to do is take a picture of the screen attached to the wall with your smartphone and wait a few seconds. These are sufficient for the television to retrieve the photo (everything is automatic of course), analyze it and reproduce on the screen the texture and / or the patterns present on the wall. Thus, if the TV is mounted on a red brick wall (see example below), an image of the wall perfectly synchronized with the latter will be reproduced on the screen. By this mean that the joints of the bricks will be connected between the wall and the screen, the same for the color and the light intensity. Really stunning! In the end, the TV “blends” into the background and becomes almost invisible.

But the Ambient + mode offers many possibilities with, for example, the possibility of displaying on the screen an image whose dominant color matches those of its environment. Or even a Chinese shade decoration, a leafy tree branch for example, which interacts and directly with the local weather forecast. It is thus easy to know if the sun is the game or if the climate is windy before putting the nose to the window. Not to mention the many partnerships forged by Samsung allowing the owner of TV The Frame to display his photos, photos taken by the greatest photographers of the moment or works from the Prado Museum. 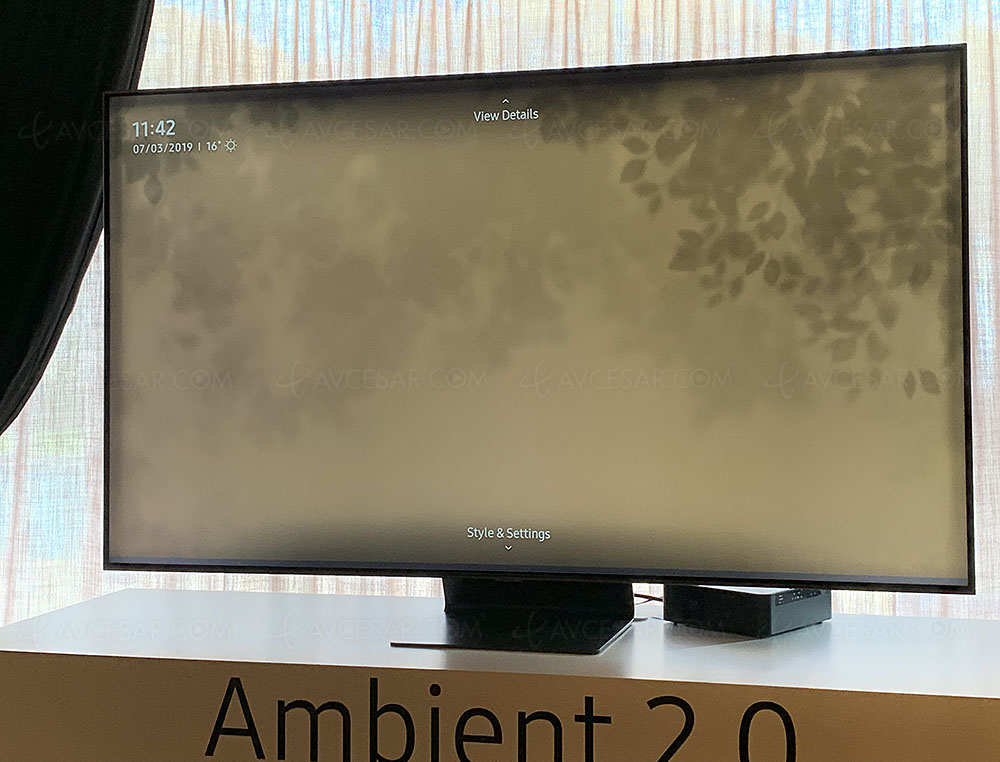 À also note, the possibility offered to display the screen of his PC on that of the TV (it only works with PC computers) even if the latter is remote, in his office within his company. The distance does not matter since the connection with the computer is made through its IP address. New this year, the Multiview function. The latter allows the simultaneous display of two contents through two windows on the screen: the first with the signal of a TV channel or a source connected to the TV, the second with the screen of a smartphone of the 'user. There are 14 display possibilities, from classic PIP to having two adjacent windows. Likewise, it is now possible to transform the TV into a giant photo frame from photos stored on an Android / iOS smartphone. 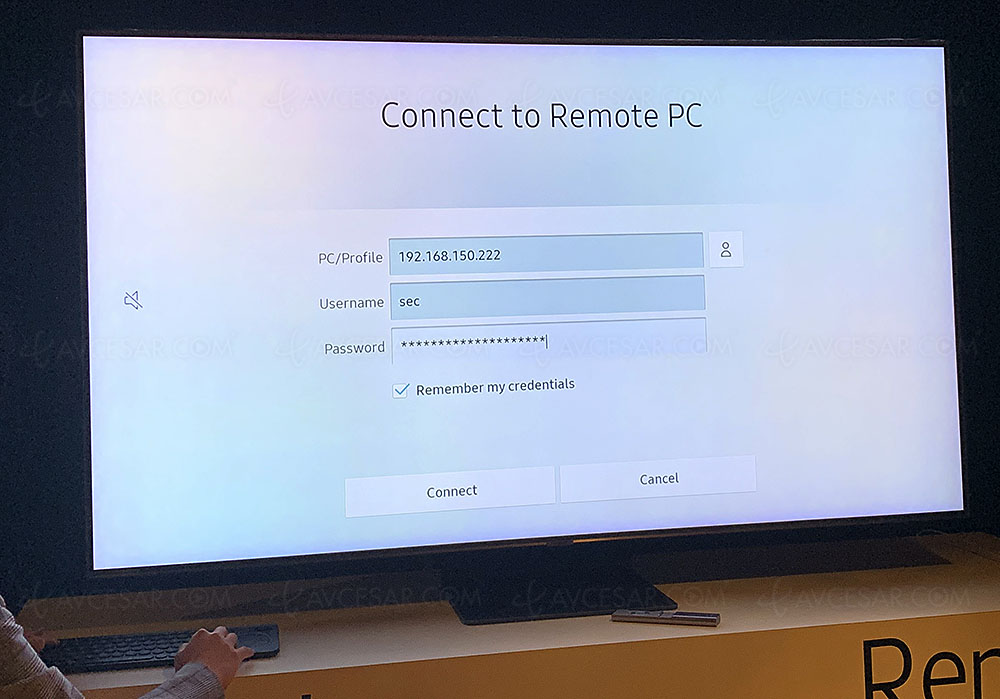 Equipped with an Edge Local Dimming LED backlighting system, the Samsung The Frame incorporate a 100 Hz obedience panel, the Supreme UHD Dimming process, a PQI 3600 fluidity index (PQI 3000 for 43 '' / 50 ' ') and Motion Rate 200 motion compensation. Finally, as already explained, the video processing is supported by the Quantum Processor 4K, 2021 vintage. As with the 2020 TVs, the AI Upscale function adds to the Machine Learning process. a dose of Deep Learning. As a reminder, the Deep Learning process is based on a neural model, either without human intervention (unlike Machine Learning) in the learning of the processor. This alone decides on the changes necessary for the image processing algorithms to find optimum quality starting from a degraded display. Namely, for the Deep Learning section of the Quantum Processor 4K vintage 2021, Samsung has favored the rendering of textures. 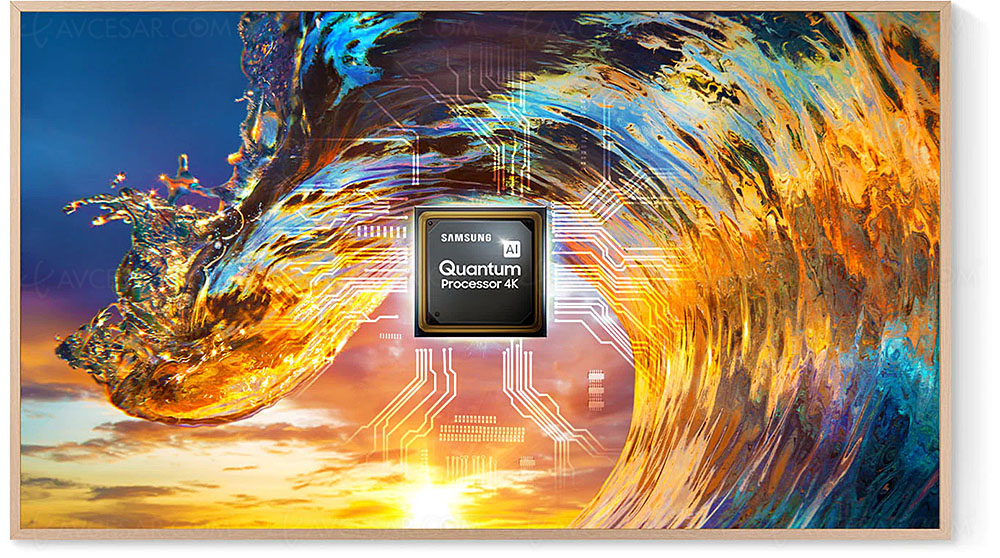 Without a doubt, the Samsung 2021 QLED TVs will remain the favorite televisions of video game players with unique capabilities: FreeSync compatibility, Game Motion Plus mode (40% more efficient) to improve the fluidity of movements via the compensation system. movement of the TV, Dynamic Black Equalizer function for outlets in the dark areas of the image and to see before the others the enemies or the sought-after objects, plus always the Input Lag in appreciable progression, measured at 9.8 ms, i.e. weaker market. Finally, Samsung representatives told us to work on G-Sync compatibility, without specifying its availability.

On the Smart TV side, there is a simplified start-up, in particular multimedia services to which the user is subscribed. As soon as it is switched on, the TV's Smart TV Tizen function allows you to duplicate all or part of the services installed on the smartphone (Android or iOS) without having to enter your codes and identifiers once again. Thus, you will be able to benefit immediately and without constraints of Spotify, Netflix, Amazon Video, Molotov… 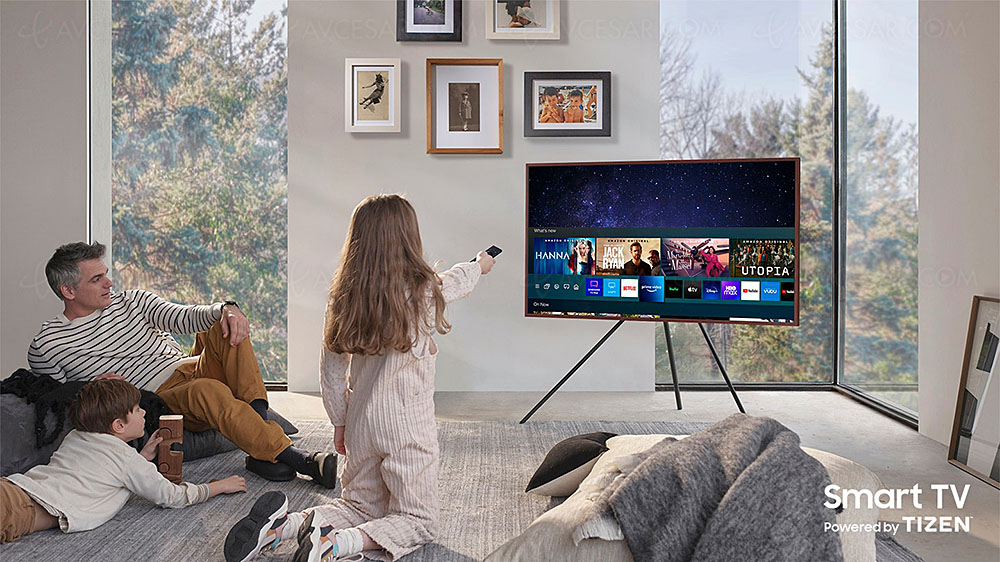 You can always choose your default voice assistant: Amazon Alexa or Bixby or Google Assistant. Likewise, owners of Apple equipment will appreciate the integrated compatibility of AirPlay 2, HomeKit and, above all, Apple TV + directly from the Tizen interface of the TV. Disney + is also responding.

To return to SmartThings, this interface allows you to control a multitude of connected products, from the thermostat to the surveillance camera, including roller shutters or the robot vacuum cleaner. Samsung announces that the SmartThings function is fully open to all market protocols for almost universal IoT (Internet of Things) compatibility. 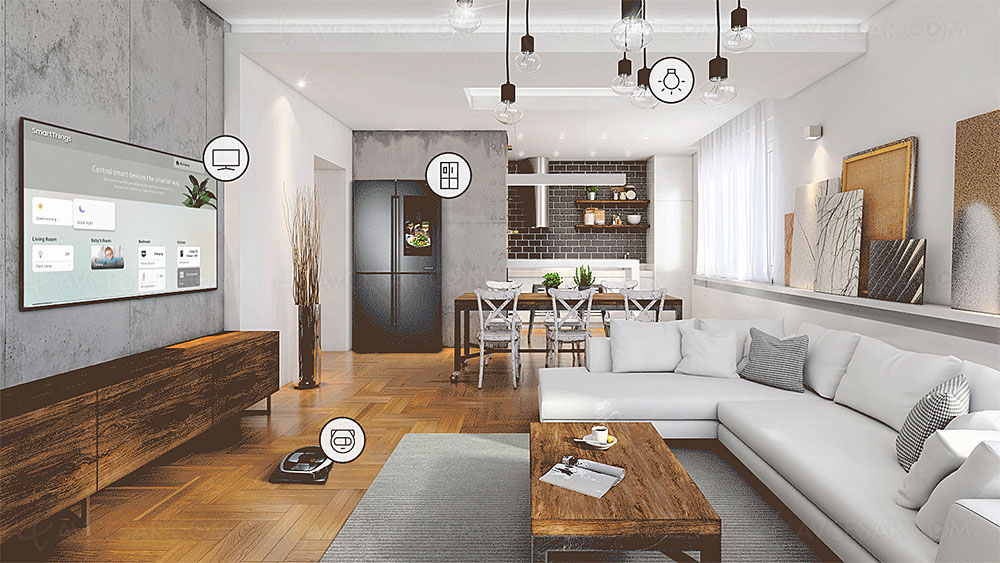 We find the OTS Lite system which has a total of four HP (system 4.0) for a total power output of 40 watts. As a reminder, the purpose of the OTS Lite system is to "stick" the sound of objects to their movement in the image for better realism (see photo below). 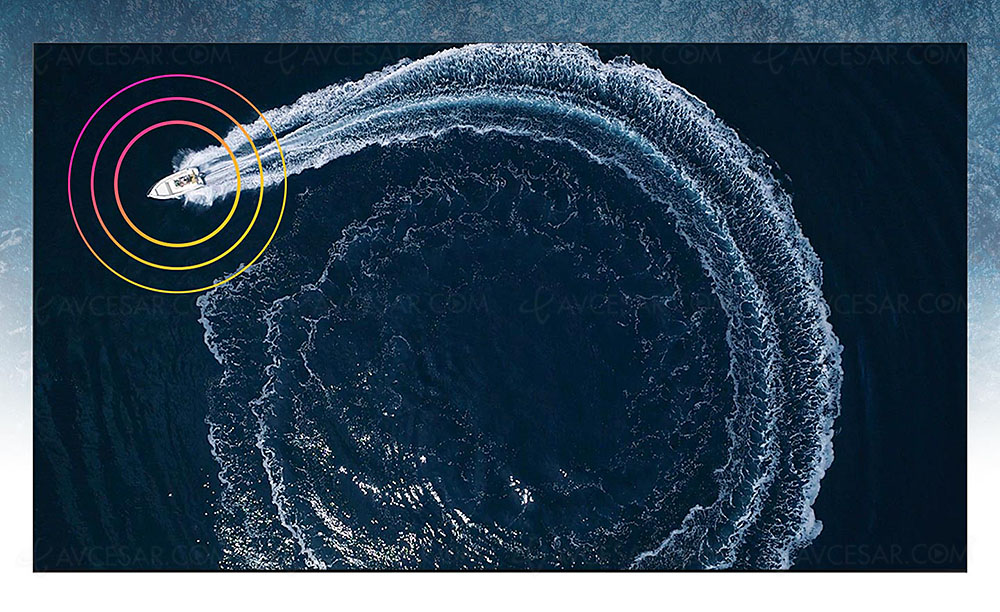 SpaceFit Sound is a new feature on Samsung The Frame TVs. The TV sends a succession of sound messages and analyzes their frequency response, their echo and the return speed to proceed to the optimum acoustic treatment according to the room.

And if the Adaptive Sound function, capable of adapting the audio settings of the TV in real time according to the displayed image, the AVA (Active Voice Amplifier) function is still present. As a reminder, the latter is intended to automatically cover new noise in the TV environment. For example that of a kettle or a vacuum cleaner which will be covered by an increase in volume managed directly by the TV. Don't panic, the TV lowers the sound, always automatically, when the noise stops.

Details of the connections

The connection has four HDMI CEC inputs including one 2.1 (Ultra HD 4K / 120 fps compatibility, VRR, ALLM, eARC) and three 2.0b, two USB Host ports compatible with Fat32 and NTFS, an Ethernet port plus a CI + port and Canal Ready certification. There is also an optical output and an RS-232C socket. Finally, HDCP 2.3 certification and HEVC compatibility are part of the game.

Obviously, the following compatibilities are guaranteed: MP3 in audio; Mpeg2, Mpeg4, WMV, XviD and DivX (in SD as in HD with MKV or TS encapsulation) in video; Jpeg in photo. Just like the Wi-Fi, Screen Mirroring, UPnP (DLNA) and PVR Ready multimedia gateway functions, allowing the programs broadcast on the screen to be recorded directly on a USB key or an external hard drive connected to a USB Host port. Another precision, these models integrate a Quad Core processor and are Fransat compatible.

Reminder of the key features of Samsung The Frame LS03A TVs: 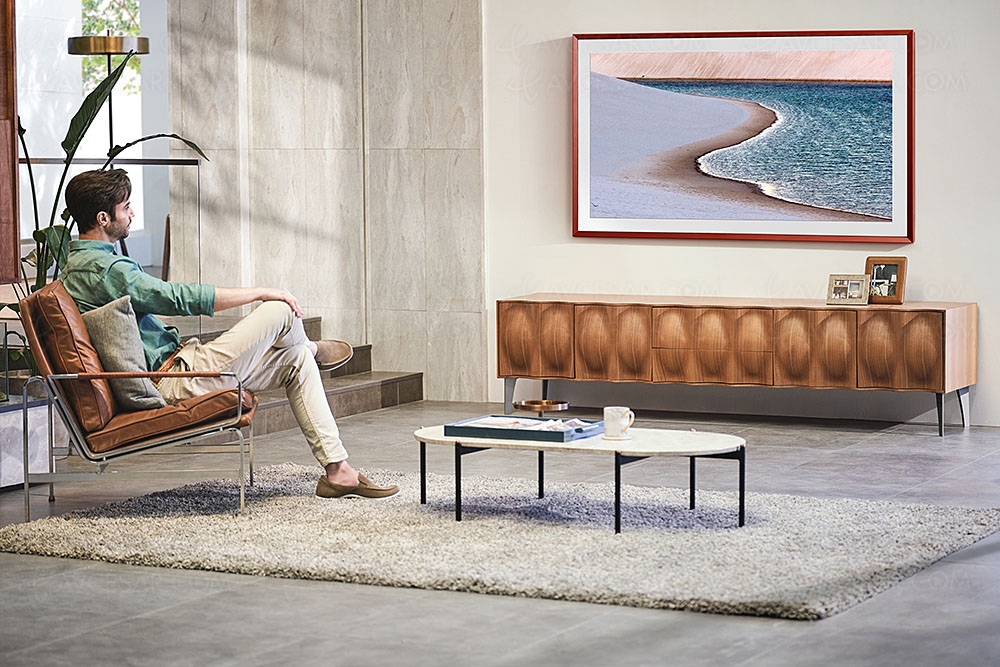