What about the self-emissive QLED television, also called electroluminescent, after the CES show in Las Vegas? Many of you ask us the question… The answer is simple, it's not for tomorrow. If the company Nanosys, a privileged partner of Samsung for its Quantum Dots technology, presented in Las Vegas last week its first self-emissive QLED prototype screen under the name Nanoled, the large-scale industrialization of such TV panels will still take several years. , even in luster.

Quest for the Holy Grail pursued by screen specialist firms, because more efficient and less energy-consuming than Mini LED, Oled and Micro LED LCD technologies, the truly QLED process, which is based on an electroluminescent Quantum Dots process, will also have the advantage of adopting all the desired shapes and sizes at leisure, for an extremely light weight. For example to cover a huge curved wall, completely cover a sphere, stairs… 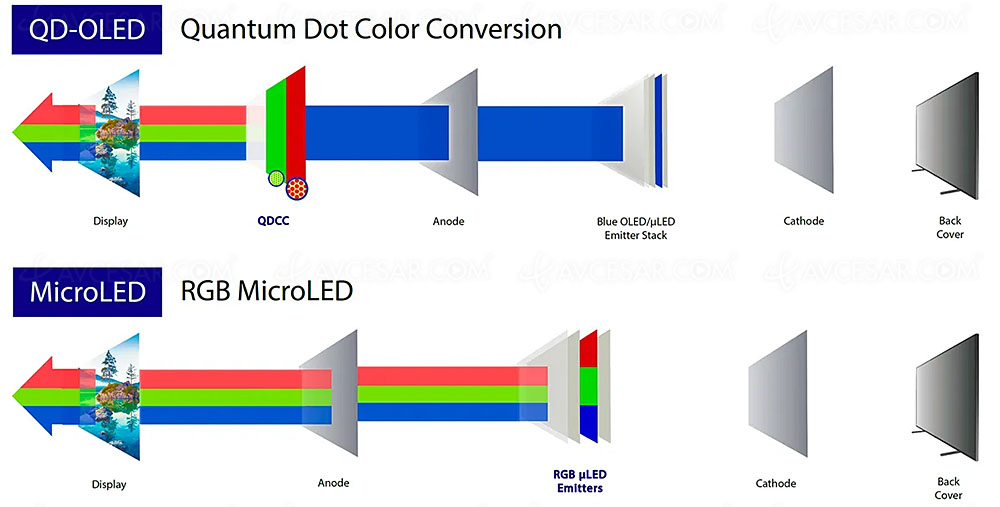 Mastering the electroluminescence of Quantum Dots nanocrystals, i.e. generating their radiation according to a precise wavelength, therefore a color, via their electrical excitation is the obsession of the Californian company Nanosys already at the origin of the Quantum Dots film used in Samsung QLED and Neo QLED TVs, the CC (Color Converter) system of QD Oled TVs or Micro LEDs with integrated Quantum Dots nanocrystals. We can therefore believe his boss, Jason Hartlove, who predicts the arrival of self-emissive QLED diffusers, now known under the name NanoLED (see diagram below). Especially after the demonstrations by the Chinese screen manufacturer BOE (Beijing Orient Electronics) in 2020 of an AMQLED (active matrix QLED or self-emissive QLED) Ultra HD 4K prototype TV and an UHD 8K specimen in May 2022 ( see our news Self-emissive 8K Ultra HD 55'' QLED screen signed by the Chinese manufacturer BOE). Especially after a very private Nanosys presentation of a prototype Nanoled screen in a suite at the Westgate hotel, previously called Hilton, a few hundred meters from the Convention Center, the heart of CES. Nothing to get excited about for the moment, of course, this prototype does not exceed 6'' (15.24 cm) diagonally.

However, even more than the announcement of the BOE screens last year, this is excellent news. Firstly because it comes from a specialist in Quantum Dots technology, so we can legitimately hope for an optimized end result of premium quality. Then Nanosys is a company very close to Samsung, in terms of collaboration but also capital, one of course explaining the other. This bodes well for the general public development of NanoLED technology at Samsung, perhaps initially via small screens (smartphone, tablet, notebook) before being adapted to TV panels. It is therefore necessary to remain lucid as to the time necessary to see the TV ranges of the brands of Nanoled models tumbling, probably at maturity of more or less five years, three if all the planets align.