The Chinese screen manufacturer BOE (Beijing Orient Electronics) presented at Display Week 2022, which was held from May 8 to 13 in San José, California, an AMQLED screen. The latter is therefore based on self-emissive Quantum Dots technology.

The Display Week 2022 event organized by the Society for Information Display was therefore marked by the AMQLED screen signed BOE. AMQLED, késako? First of all, it's about defining an AMQLED screen… Namely, the acronym stands for Active Matrix Quantum Dots Light Emitting Diode, or an active matrix panel based on Quantum Dot technology. Understand by this that it is not a question of LCD, Oled or Micro LED technology but of Quantum Dots nanocrystals capable of emitting their own light if they are crossed by an electric current. AMQLED, the Samsung's announced objective from 2016 against the Oled Does this remind you of anything...? And yes, it is neither more nor less than the technical process evoked as the television Holy Grail in 2016 by Samsung when the Korean group officially renounced the TV Oled RGB technology, competitor of the White Oled signed LG, due to insufficient performance. in terms of color reproduction and especially the light peak, except to call into question the durability of the screens due to the phenomenon of marking (Burn-In). At the time, on the occasion of the IFA show in Berlin 2016 (see our IFA 16 news > Samsung says no to Oled TVs, yes to Quantum Dots technology), Samsung engineers therefore chose the path of Quantum Dots with the ultimate goal of developing a self-emissive, or electroluminescent, QLED diffuser (see our dossier With Quantum Dots, Samsung is revolutionizing Ultra HD, page 3 to find out more). AMQLED, BOE at the advanced R&D Samsung is therefore not the only screen manufacturer to believe in the future of this technology, the Chinese firm BOE is also on the move and has been presenting various prototypes of its kind for some time now. In 2017, the world was presented with small size AMQLED screens, 5'' (12.7 cm) and 14'' (35.5 cm), then a 55'' (140 cm) Ultra HD 4K specimen in 2020. 2022, a new 55 '' AMQLED screen made its appearance at Display Week, but in 8K UHD this time. Proof that the development of technology is taking its course, rather positively. Namely, this latest model combines self-emissive Quantum Dots nanocrystals with a TFT (Thin Film Transistor) substrate that embeds the control circuits, and an inkjet printing production process. The latter seems to be essential for the manufacture of AMQLED panels thanks to a high yield, therefore reduced costs. AMQLED, the perfect technology on paper As a reminder, the advantages of AMQLED technology are numerous on paper: absence of a backlighting system, individual pixel control (therefore the possibility of turning them off to obtain perfect black), not to mention an extended gamut for faithful and accurate reproduction of colors. The time for mass production of this type of panel is not yet on the agenda, but it undoubtedly appears to be on the right track. Good news in view of the high costs associated with Micro LED, a self-emissive process too. No doubt we will see affordable AMQLED TVs in stores in the coming years, presumably before their Micro LED counterparts which may be dedicated to very large screen sizes and/or atypical format broadcasters (21/9, 32/ 9…). 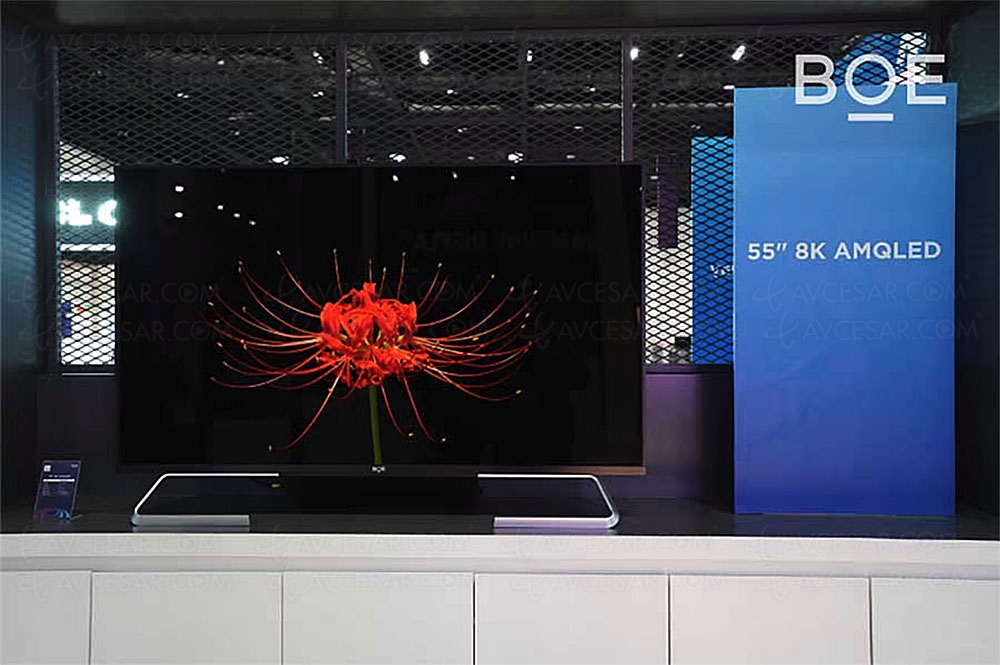