With the presentation of the LS60 Wireless columns on the occasion of the brand's 60th anniversary, the saga of connected active speakers from the British manufacturer Kef continues. Big sisters of the Kef LS50 Wireless II library specimens (click on the reference to discover their complete test by the editorial staff of AVCesar.com), the Kef LS60 Wireless borrow from them many technical solutions associated this time with the volume of column models. The promise of jubilant stereo listening.

First of all, it is a question of noticing the design of the Kef LS60 Wireless floorstanding loudspeakers. 1.09 m high, 21.2 cm thick and 39.4 cm deep, the LS60 Wireless are extremely sober and offer a furiously modern aesthetic. From the one that Apple would not have denied, for example, if the American firm had launched into column speakers. In short, the Kef LS60 Wireless combine two antagonistic concepts, discretion and presence, for an amazing result. 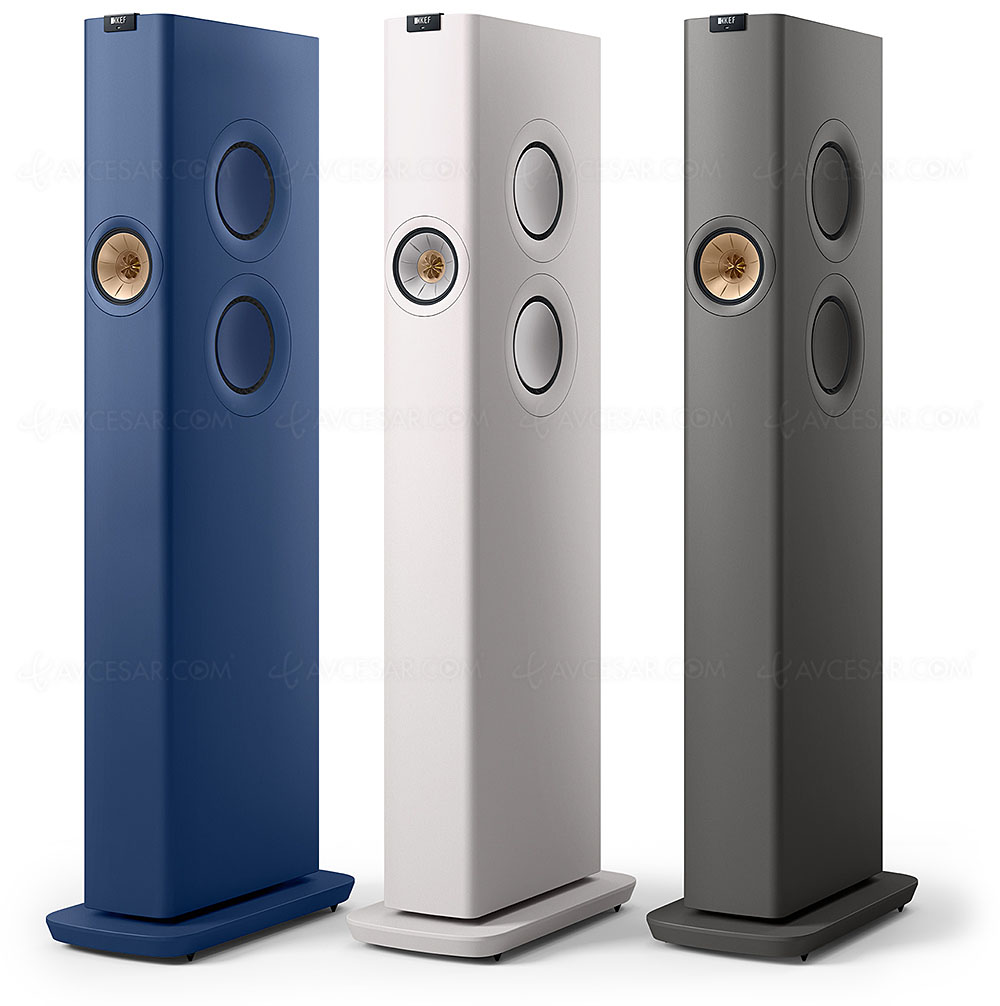 Of course, the three-way Kef LS60 Wireless loudspeakers benefit from the exclusive MAT process (for Metamaterial Absorption Technology) which has been awarded worldwide. As a reminder, the latter materializes in the form of a complex labyrinthine structure in relief where the channels act as an acoustic black hole absorbing 99% of the unwanted sounds radiating at the rear of the Uni-Q coaxial loudspeaker, against 60% previously. Thus, the distortion is virtually eliminated (THD at 0.07%) and the transparency increased. It should be noted that the MAT loudspeaker, 12th generation Uni-Q signed Kef, provides a better frequency response (+40%). 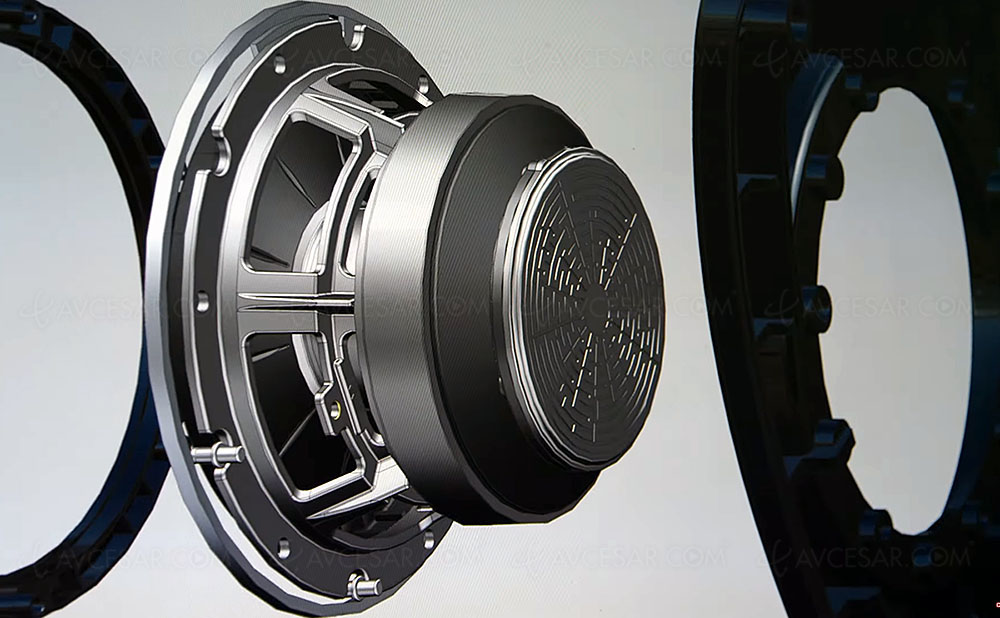 In terms of new features, we can also note a new tri-amplification: 100 W in Class A/B for the 19 mm ventilated aluminum tweeter, 100 W in Class D for the 10 cm aluminum cone midrange and 500 W in Class D for the four 13.5 cm Uni-Core woofers (two pairs of loudspeakers mounted back-to-back) with force cancellation inaugurated on the recent Kef KC62 subwoofer to optimize bass rendering in a minimum of space. That's a total of 1,400 W for the pair. 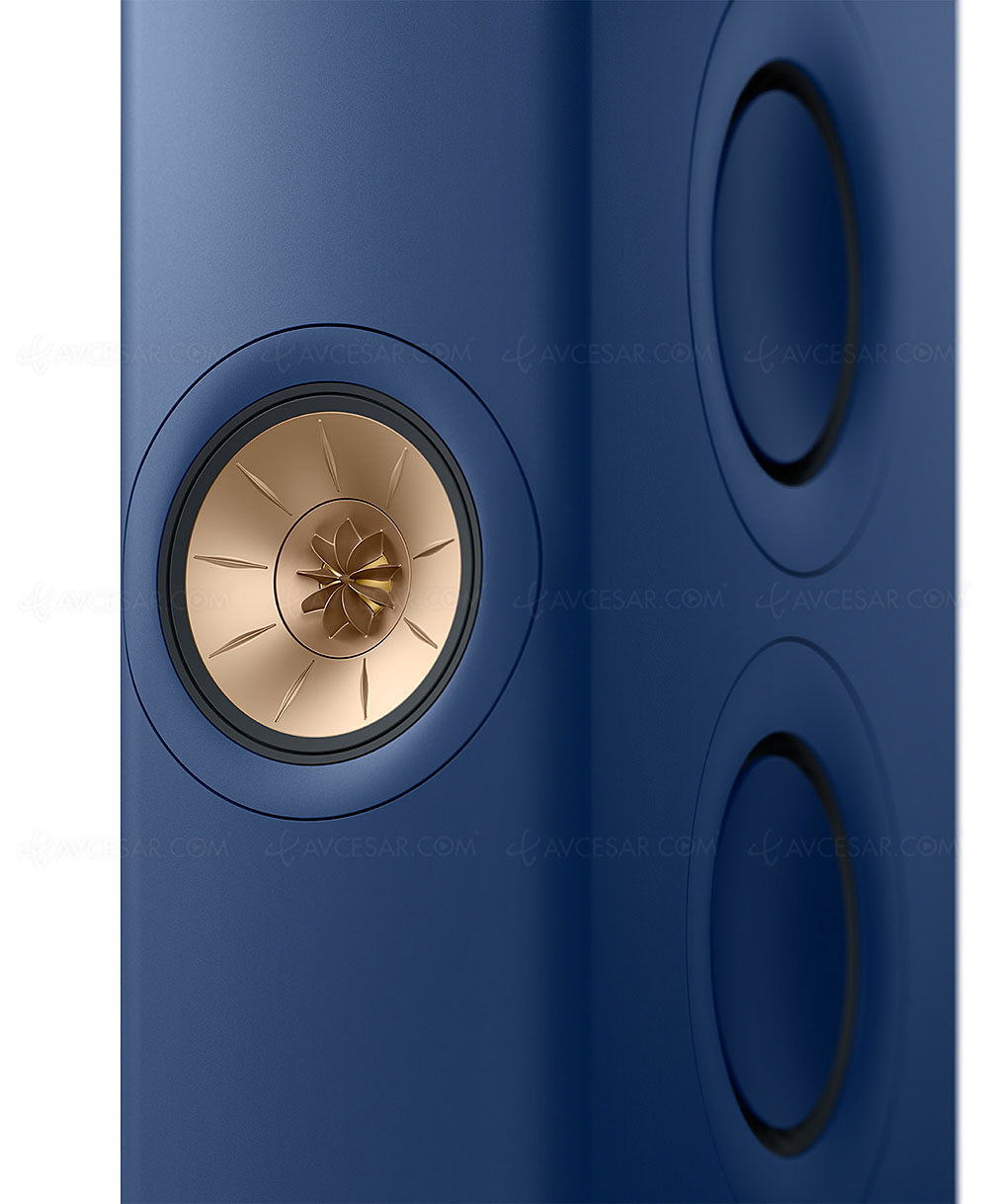 We also note the Apparent Point Source technology. This consists of an equidistant placement of the boomers of the Uni-Q coaxial loudspeaker to create a single point of emission of the high, mid and low frequencies.

As for the Kef LS50 Wireless II, the Kef LS60 Wireless have an HDMI port equipped with the eARC function to recover, once connected to a television, the Dolby Atmos soundtracks from an OTT service such as Netflix or Amazon Prime Video to do a stereo downmix. Or the sound of a game console connected to the television.

Finally, using the new Kef Connect application, it is still possible to calibrate the sound reproduction according to the environment of the Kef LS60 Wireless and to access the platforms Tidal, Amazon Music, Qobuz, Deezer, Apple Music plus thousands of Webradios. Likewise, Spotify Connect certification is included. 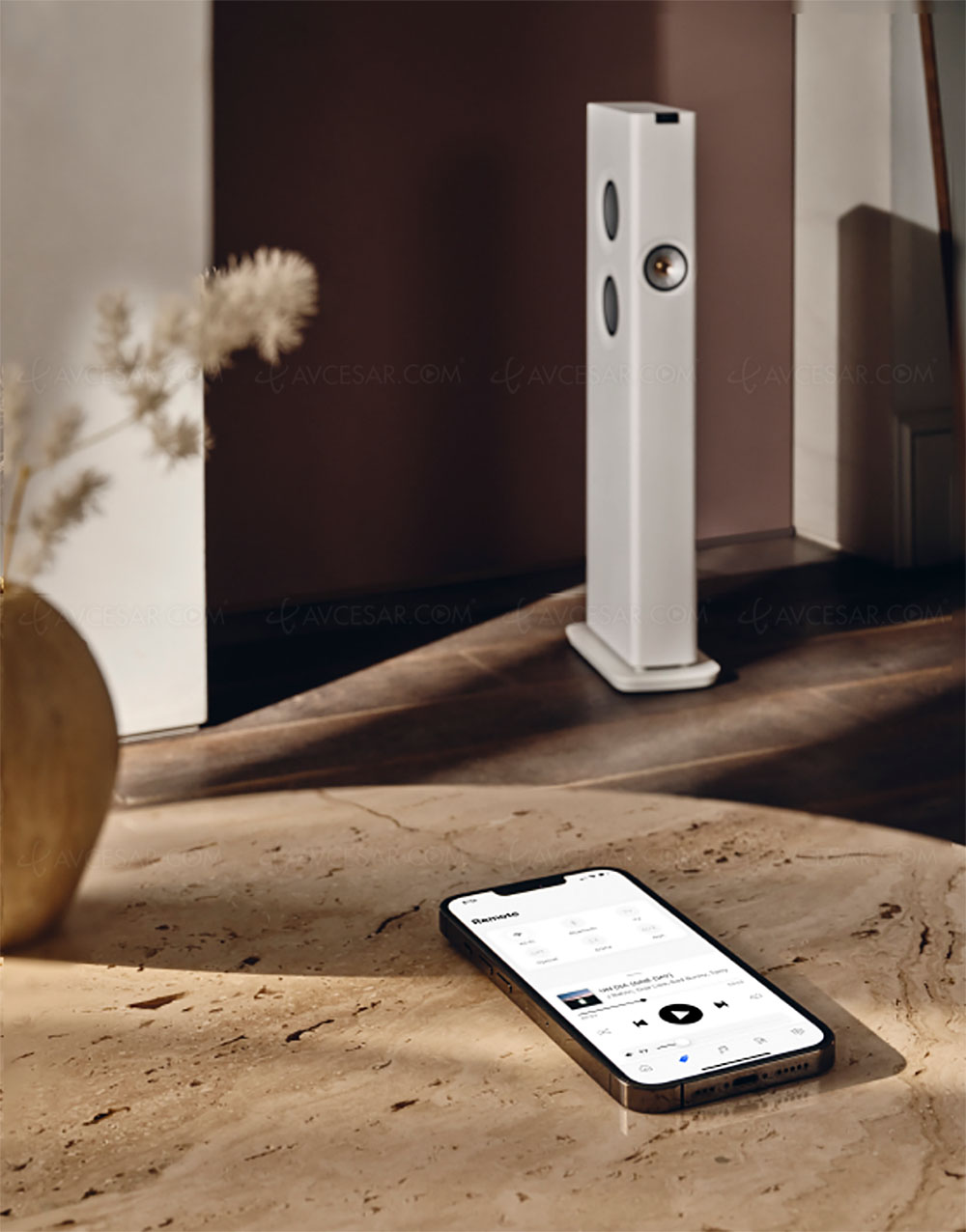 In terms of connections, in addition to the Ethernet port, the HDMI output, the optical input and the coaxial input already mentioned, there is also an RCA auxiliary input, an Ethernet port to connect the speakers together and a subwoofer output. In terms of connectivity, we note Bluetooth 4.2, Chromecast (integrated) and AirPlay 2 compatibility, not to mention the UPnP (DLNA) audio gateway function. Precision, with the Chromecast (integrated) or AirPlay 2 protocols, associated with the next Roon support (via later Firmware update), it is possible to configure a multiroom system using several Kef LS60 Wireless. 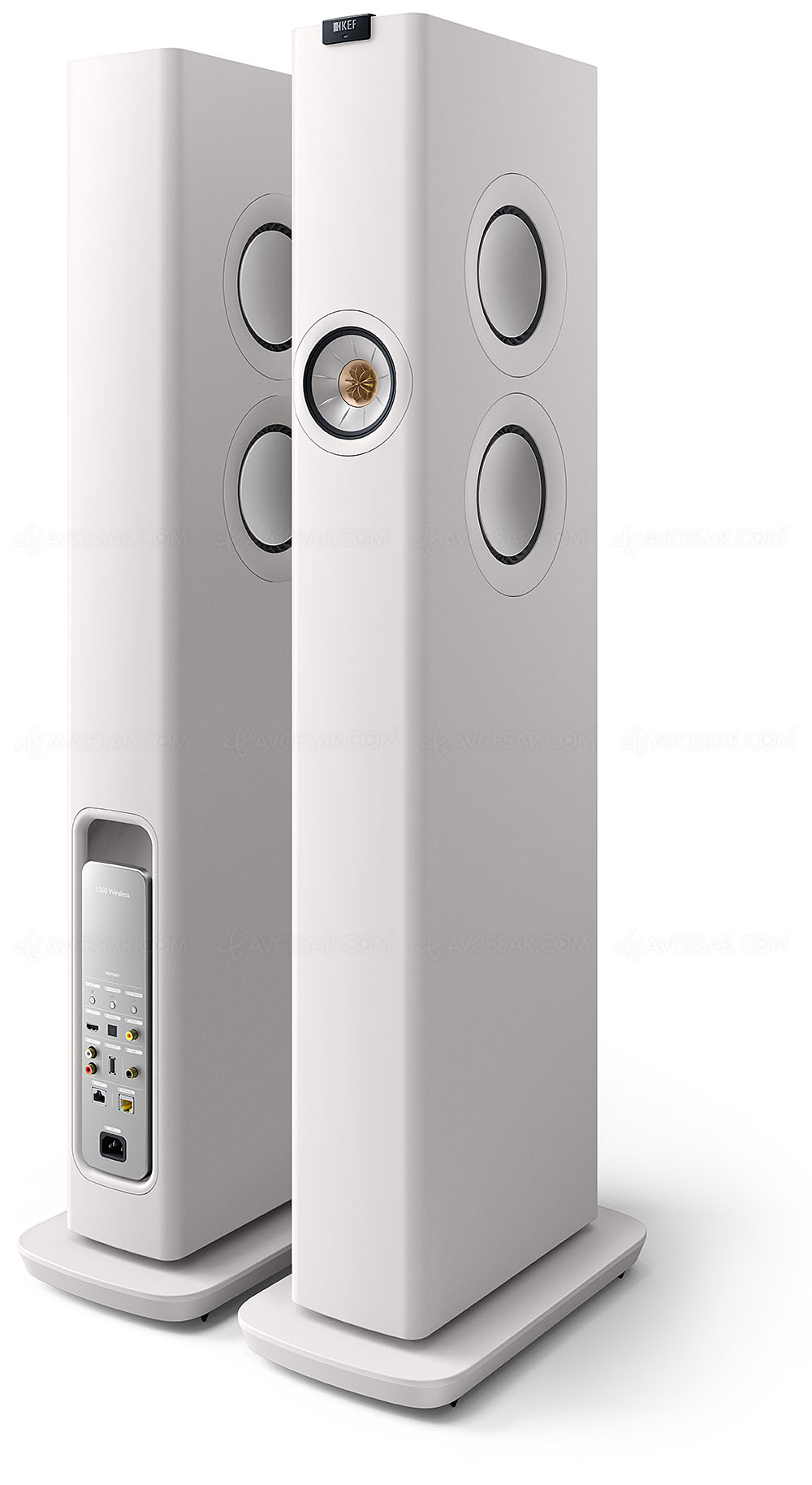 Availability announced for the end of June, in blue, gray or white. Indicative price: 6,599 euros.

Reminder of the key characteristics of the Kef LS60 Wireless speakers: 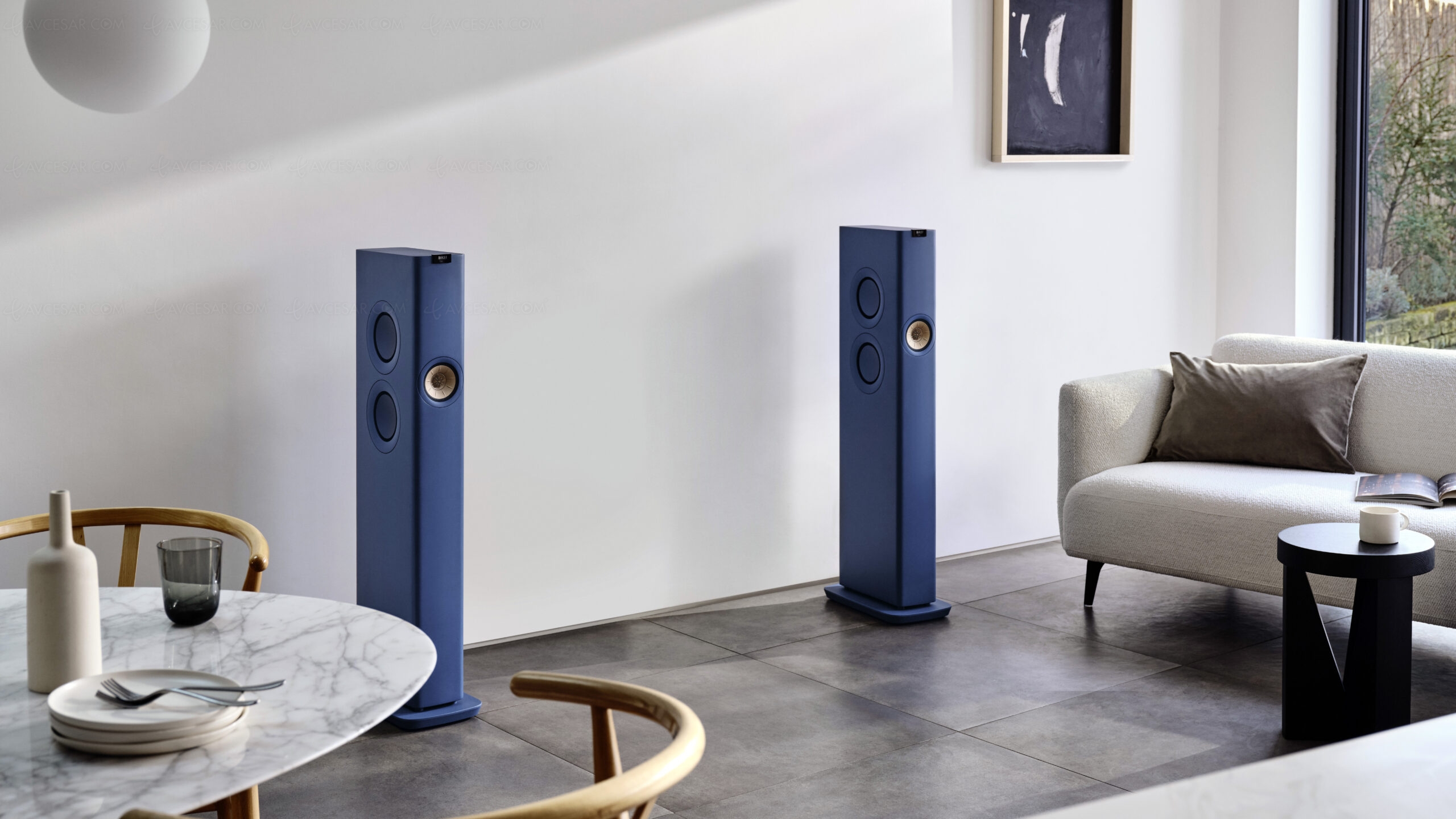