Back on our review of the troops of the Sony 2022 TV range started yesterday with the QD Oled Sony A95K series, the Oled Sony A90K and Sony A80K series, all Ultra HD 4K, not to mention the Mini LED Ultra HD 8K Sony Z9K series. Today we're looking at the Sony X95K, which also has a Mini LED backlight system, but only Ultra HD 4K.

Within these three Sony X95K diffusers, we find the XR Cognitive Processor Phase 2 chip, the most powerful ever developed by the brand, alongside a 10-bit native 100 Hz panel and a Mini LED backlighting system associated with the XR Backlight Master Drive process appeared on the Sony ZD9 TV series in 2016 (click on the Sony reference KD-65ZD9 to discover the complete test of the product by the AVCesar.com editorial staff).

The XR Backlight Master Drive backlighting system is able to display all the details of an image by perfectly modulating the brightness of each of the diodes. Thus all the shades of black of the body of a suitable dog, also on a black background, can be transcribed on the screen. But the XR Backlight Master Drive also drastically reduces the Blooming phenomenon still present around luminous objects or white letters on a black background, without lowering the overall brightness of the image. This by modulating very finely the quantity of energy sent to the diodes of the backlighting zones which adjoin those which display these shiny objects or letters in order to display a lower luminosity for a perfect transition of their outline with the rest of the image. Of course, this ability to perfectly distribute energy to the targeted diodes also allows for a higher peak light for incredibly sparkling specular lights. 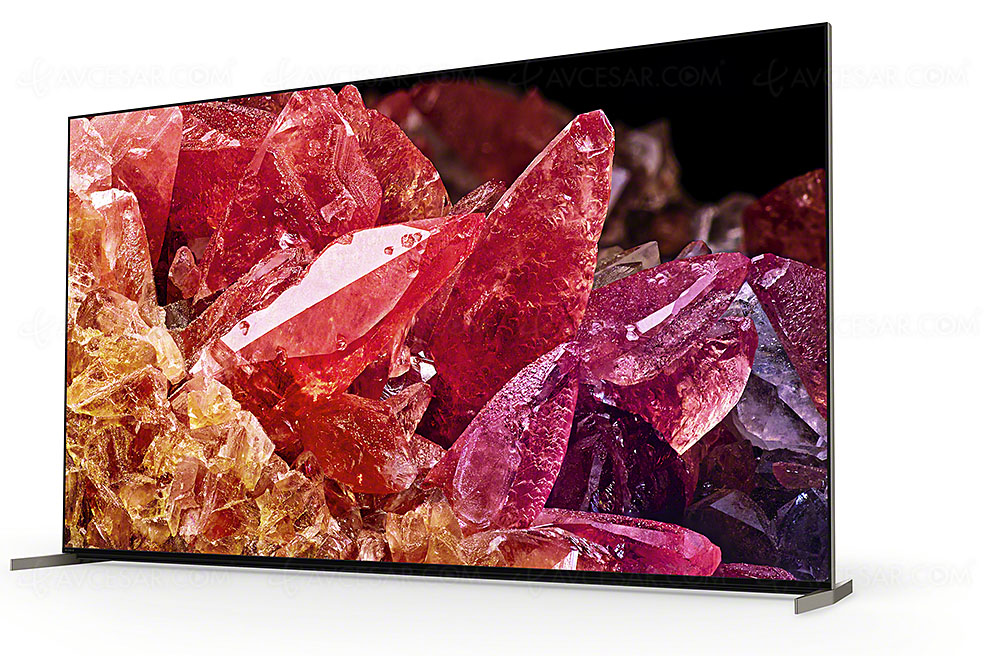 The capabilities offered by the XR Cognitive Processor Phase 2 have enabled Japanese engineers to improve the XR Upscaling 4K technology. This new algorithm, associated with the third image database dedicated to textures, detects and analyzes each object making up an image. These are individually optimized to display a sharper texture, greater depth for the purpose of increased naturalness and reality. Of course, the XR Smoothing process to greatly reduce (or even eliminate) the posterization phenomenon is still on the menu. Sony X95K TVs also incorporate XR Motion Clarity motion compensation and the exclusive XR Triluminos Pro feature for even richer and more precise colors, all within a large color space.

Finally, we note the XR Contrast Booster 15 function (for one of the highest luminous peaks of Sony 2022 TVs) for superior quality images with extreme brightness in the areas of shine and blacks of abysmal depth. Of course, Sony X95K TVs are compatible with HDR10, HDR HLG and HDR Dolby Vision. 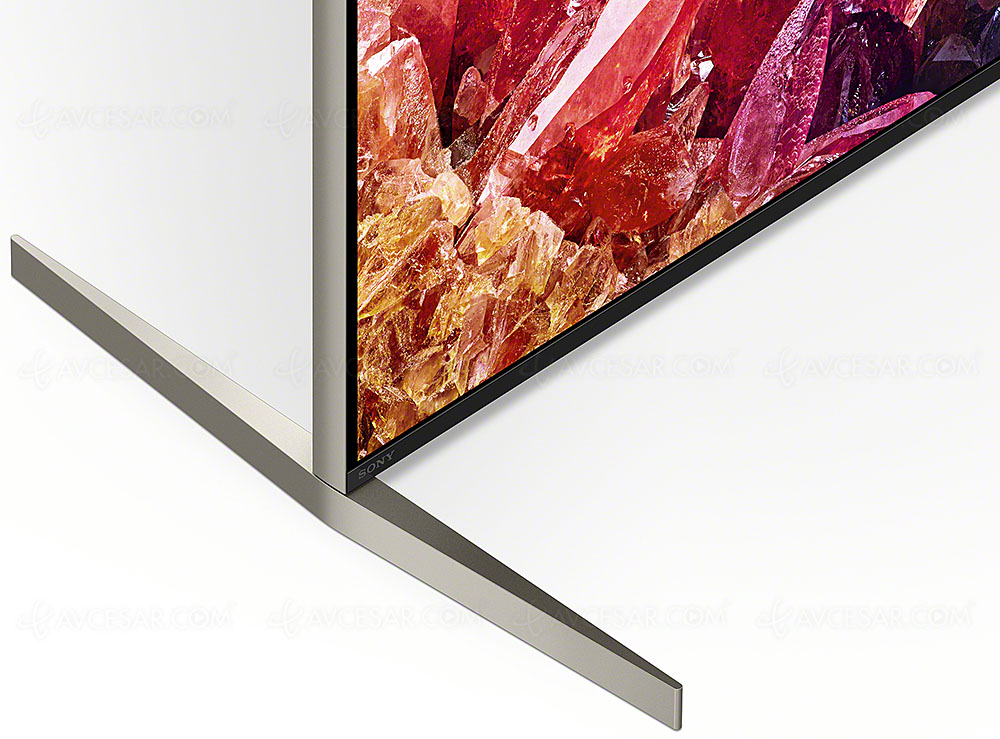 Major evolution of Smart TV 2021, the Google TV operating system that gives pride of place to content is still in 2022. As a reminder, like Android TV, Google TV groups and organizes in one place all your streaming apps and subscriptions. But, while with Android TV, the applications are at the top of the menus, here it is the content that takes precedence, displayed next to each other by theme. More than 6,500 applications are concerned, including Disney +, Netflix, Canal +, France TV or YouTube and read 700,000 films. And you no longer have to juggle from one service to another to find what you want to watch: the hundreds of thousands of films and series are organized and searchable by genre, whatever their origin. 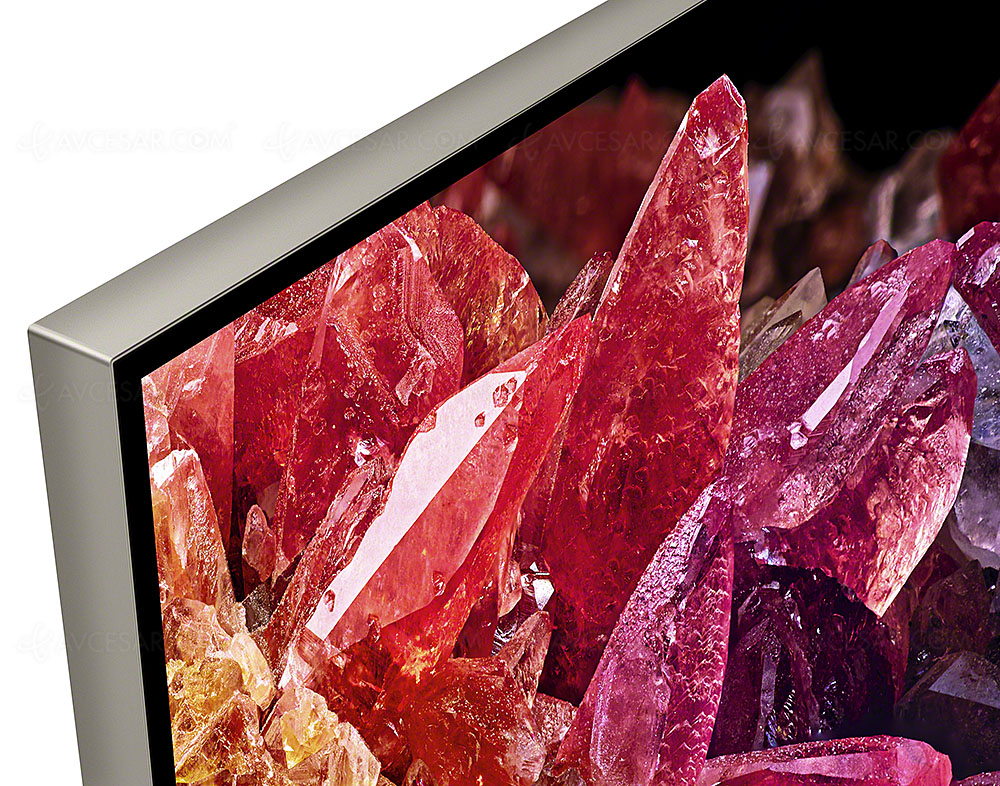 Precision, the XR Cognitive Processor is also used for the Smart TV functionality, for improved ergonomics through almost immediate fluidity and responsiveness. Finally, Sony X95K TVs immediately integrate the Google Assistant function and a dual microphone, one on the remote control and the other on the TV. It will then be possible to exchange vocally directly with the screen without using the remote control. Likewise, the Works with Alexa certification (need for an Amazon Echo-type connected speaker) is part of the game, ditto for those AirPlay 2 and HomeKit.

Google Duo is in the game (camera optional) and a new function appears "Find remote" in addition to a new backlit remote control of reduced size (-36%) with much fewer buttons (25 against 49 on the zappette 2021). Thus it is possible to command aloud the search for the remote control if it is lost, the latter then appearing. Smart. And of course, via the optional camera, gesture control is back. 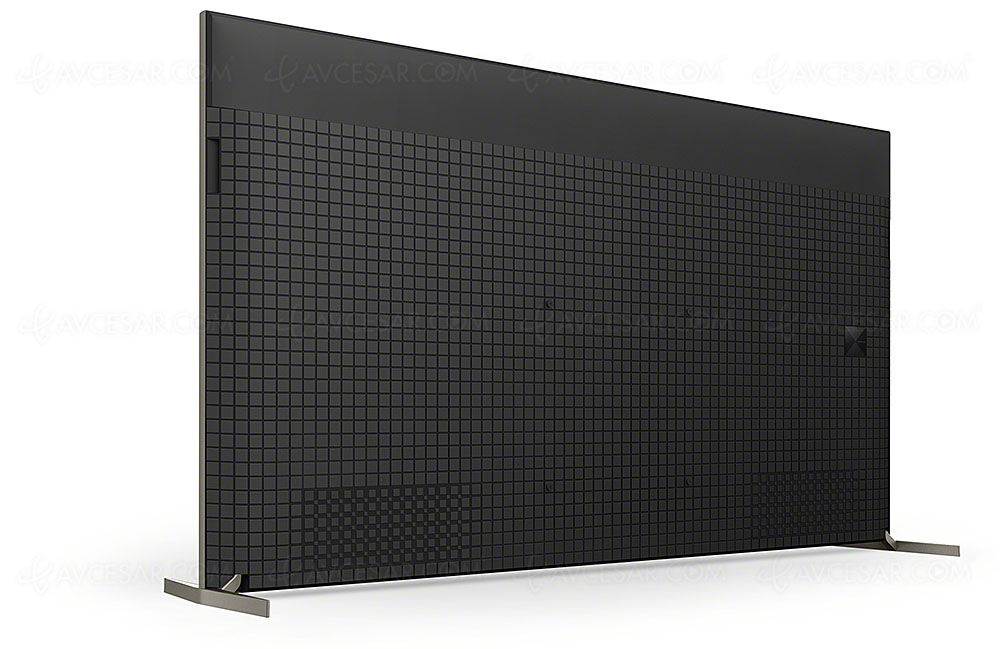 But the Bravia Cam function has many other features. In addition to gesture control, the camera triggers the display of an automatic reversing message and an audible alert if the person watches the TV too closely (very useful for children), allows energy savings by automatically lowering the brightness TV if the viewer leaves the room. Last precision, it is possible to turn off the camera completely (via a switch) and no private data is stored on it or on the television.

With the option of a camera on the television, Japanese engineers have developed the Ambient Optimization Pro mode. In addition to automatically adjusting the quality of the image (Brightness and Contrast) and of the sound (acoustic correction according to the room, optimal position of the listening point) according to the ambient conditions (ambient light, sound environment, etc.) , another is now operated according to the distance separating the viewer from the screen. Even more strongly, the sound balance (right or left) is corrected according to the viewer's position to preserve a perfect stereo image and intelligibility of the voices. 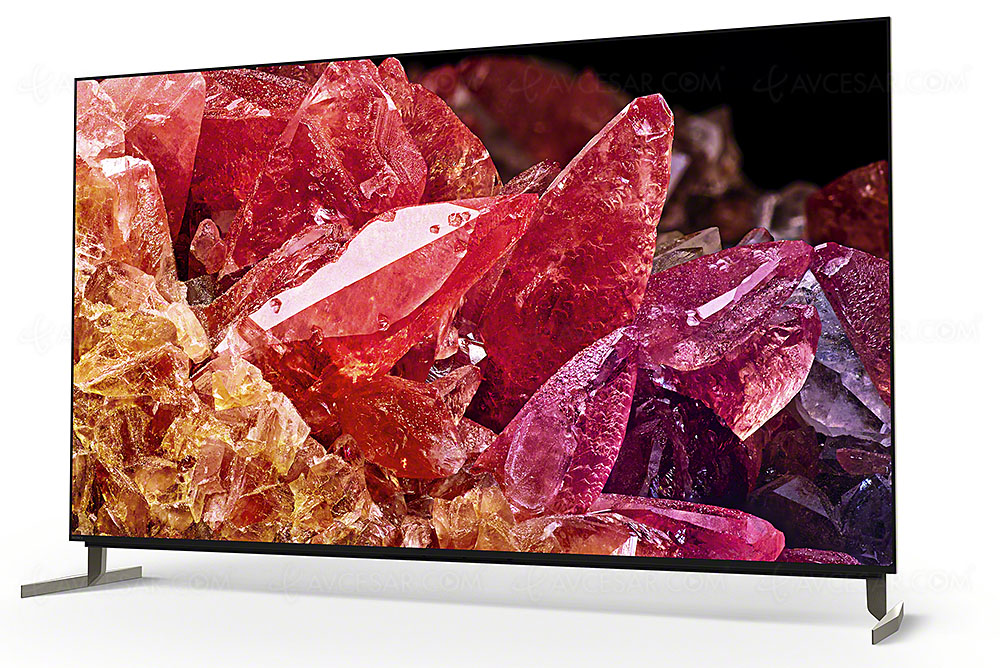 Like all Sony Bravia XR televisions, Sony X95K TVs offer the exclusive Bravia Core streaming platform (for Center of Real Entertainment). This, mainly animated by Sony Pictures productions, offers for the purchase of a Bravia XR TV the possibility of viewing for free for 24 months a selection of 10 films of the greatest films of the Hollywood studio and the largest collection of features -measures bearing the Imax Enhanced label, to be chosen from a catalog which is regularly enriched. For example, in 2022, the latter should host the feature films The Man From Toronto, Morbius, Uncharted, Where the Crawdads Sing, Lyle, Lyle, Crocodile, The Nightingale, I Wana Dance Somebody, Bullet Train, Kraven The Hunter… And this, with extreme quality, up to 80 Mbps speed for consumers with a suitable subscription.

The 4.2 sound section of the Sony X95K series is called Acoustic Multi-Audio. It uses two tweeters placed at the top of the panel with a power of 10 W each, two mediums at the bottom of a power of 10 W each, plus two boomers each delirious 10 watts. Thus, the viewer can locate sounds much more precisely in space, in order to get closer to the performance of the Acoustic Surface Audio + process of the brand's Oled TVs. The total power is 60 W (2 x 10+ 2 x 10 + 2 x 10).

Support for Dolby Atmos, already on the program last year, remains of course. Ditto for the Acoustic Center Sync function which offers, like the Q-Symphony function which appeared in 2020 on Samsung QLED TVs and from which it is inspired, to leave the television sound system active if (exclusively) a Sony sound bar is connected to widen the soundstage.

The 3D Surround Upscaling feature capable of converting 2.0 or 5.1 audio signals to 5.1.2 is present. Last details, Sony X95K TVs have two HDMI 2.1 inputs. One of them manages VRR, ALLM, eARC and 4K / 120 functions via 48 Gbps bandwidth, a second manages 4K / 120, VRR and ALLM functions via 48 gigabit bandwidth. Two other HDMI 2.0 connectors are available via 18 gigabit bandwidth. 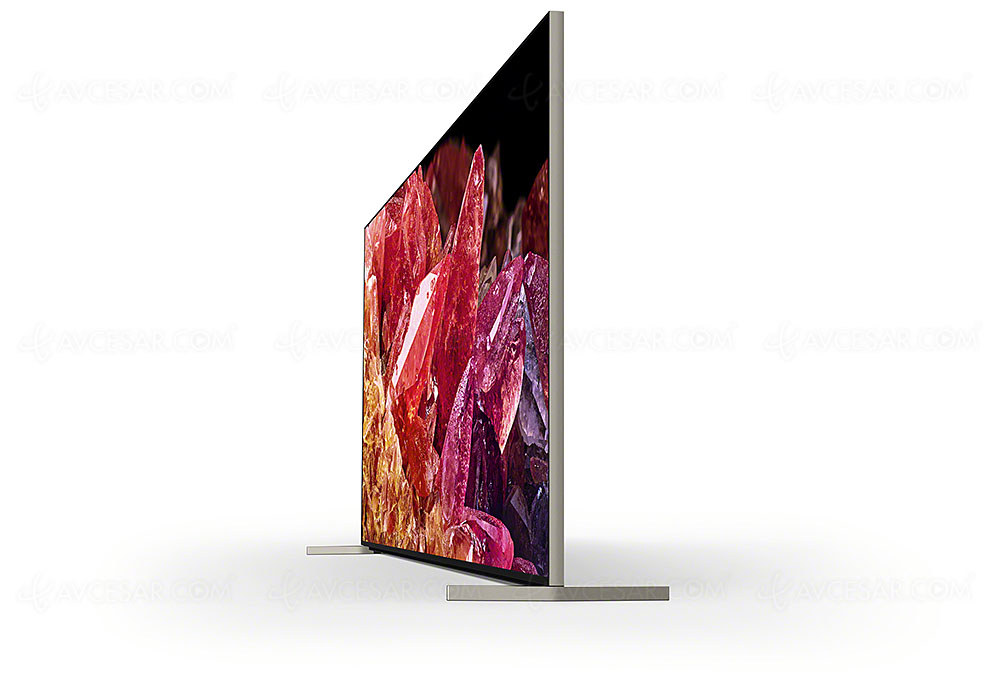 Among the other advantages of Sony X95K TVs, we can also mention the X-Wide Angle process. Thus the off-axis vision of the TV does not cause fading of the colors. Likewise, Sony X95K TVs have the X-Anti Reflection coating to avoid annoying reflections, Netflix Adaptive Calibrated Mode (to enjoy series, documentaries, films, etc. on your TV with the same quality as that of post studios. - Netflix production), Imax Enhanced certification. In 2022, there is also the Bravia Core Calibrated Mode label: the television set perfectly adapts its parameters to those of Bravia Core content for maximum picture quality.

The Perfect for PlayStation 5 certification with its two features Auto HDR Tone Mapping and Auto Genre Picture Mode is also on the program. As a reminder, the Bravia XR Sony X95K TVs automatically switch to Game or Standard mode depending on the nature of the signal sent by the PS5 console. 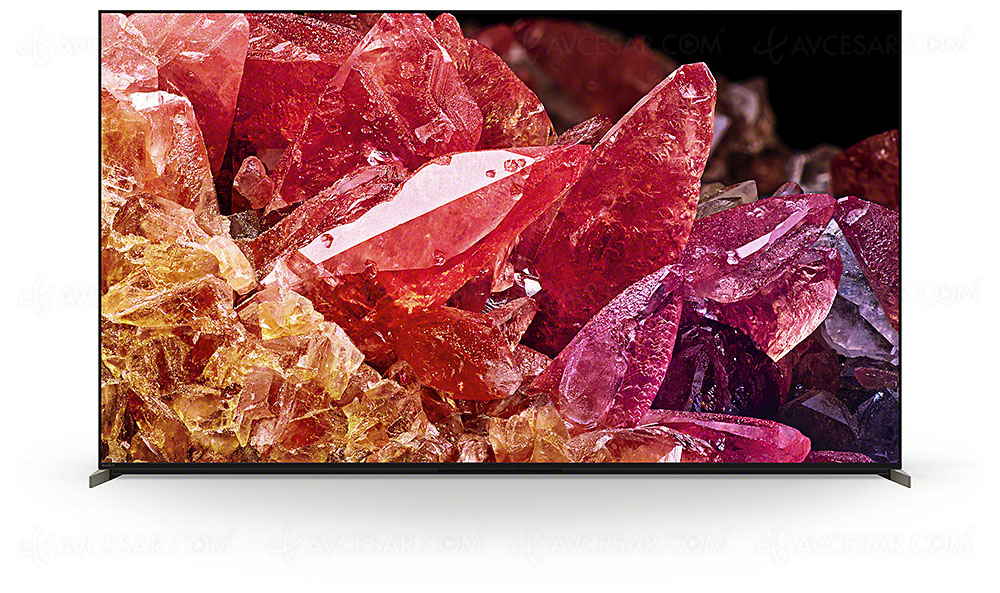 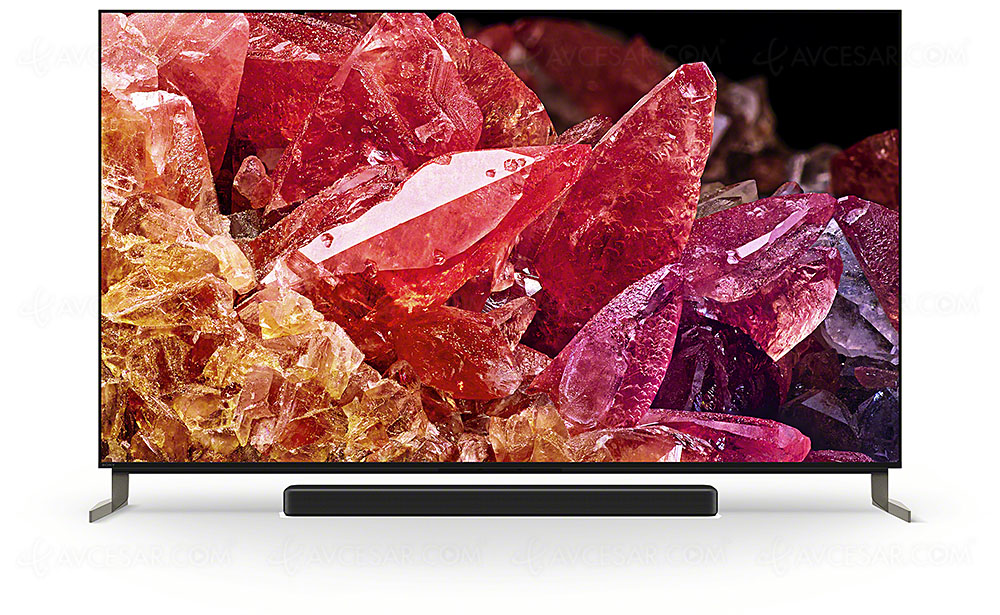 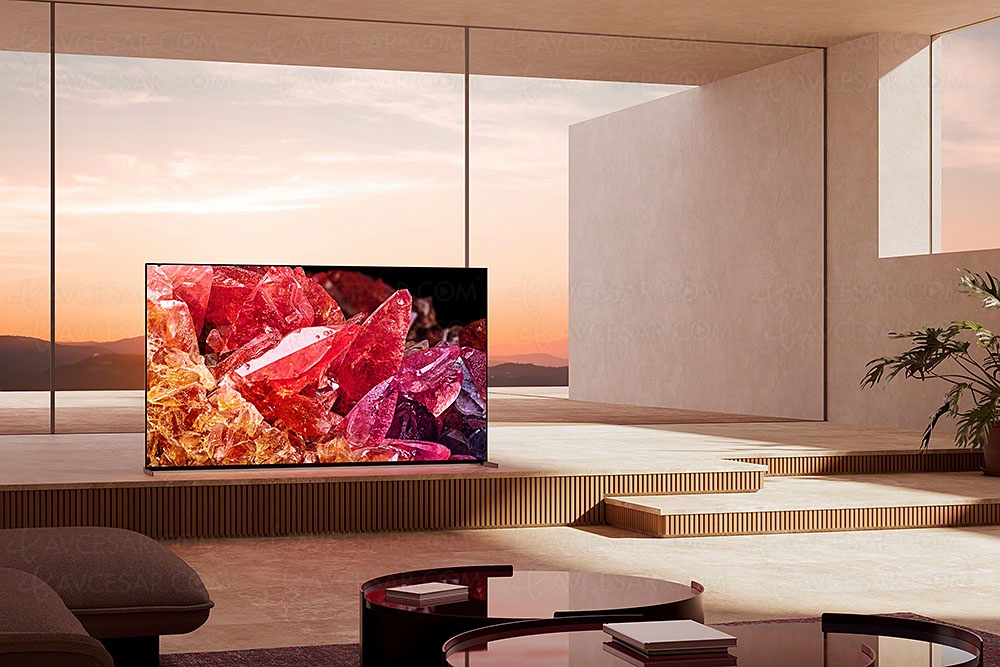