Imax Enhanced technology is coming soon to Disney +. Thirteen Marvel titles in this format are indeed announced on November 12 as part of Disney + Day celebrating the second anniversary of the OTT service.

For the Imax Enhanced technology, which has had difficulty convincing players in the audio-video world, this is a major breakthrough in terms of notoriety and credibility. Until now, only a few audio-video amplifiers and certain Sony 4K Ultra HD TVs had been awarded the Imax Enhanced label. Little satisfaction compared to Dolby Labs or DTS.

The thirteen titles available at launch include the premieres of Shang-Chi and The Legend of The Ten Rings recently released in theaters, to see if an additional cost will be requested to enjoy them. Other Marvel feature films are announced in Imax Enhanced, including Iron Man, Guardians of the Galaxy, Guardians of the Galaxy Vol. 2, Captain America: Civil War, Doctor Strange, Thor: Ragnarok, Black Panther, Avengers: Infinity War, Ant-Man and The Wasp, Captain Marvel, Avengers: Endgame and Black Widow.

The word to Rich Gelfond, CEO of Imax

"For over a decade, Imax has helped filmmakers take fans through the Marvel Cinematic Universe to theaters and now this epic journey lands in a new world: home," said Rich Gelfond. , CEO of Imax. Imax, Disney and Marvel Studios are giving fans what they want: the most immersive viewing experience in the lifetime of a Marvel Studios film, from the exclusive theatrical release to the home where they can now. watch the adventures of the Avengers with an image ratio never before offered. "

The word to Michael Paull, president of Disney + and ESPN +

"Disney, Marvel Studios and Imax have worked together for years to bring the world's most popular movies to the big screen, and starting Friday, we'll start bringing Imax technology to subscribers with the Imax Enhanced label through the Disney + app," said Michael Paull, president of Disney + and ESPN +. We're excited to bring this quality audio to Marvel fans and audiences alike on Disney +, and we look forward to offering even more Imax Enhanced features in the future. "

Jon Kirchner, CEO of Xperi, has the floor

"We're excited that MCU fans will soon have the opportunity to experience Imax's extended aspect ratio right at home with the launch of Imax Enhanced on Disney +," said Jon Kirchner, CEO of Xperi. DTS is proud to be an integral part of Imax Enhanced and we look forward to unlocking more interesting technology for Disney + subscribers in the future, which will include the immersive sound of DTS's signature Imax. "

Namely, this announcement is being hailed as an evolution of the relationship between Imax and Marvel Studios, which began in 2010. Since that date, the Marvel Cinematic Saga has earned more than $ 1.6 billion on screens. ImaxX worldwide, making it the highest grossing franchise in Imax history. Avengers: Infinity War and Avengers: Endgame were the first films shot entirely with Imax digital cameras, and all titles released on November 12 feature selected footage from Imax's extended aspect ratio. As a reminder, the ratio of the Imax format is 1.90: 1 (and also 1.43: 1), which offers compared to the 2.35 cinemascope format up to 26% additional image displayed on the screen in certain sequences. In terms of dynamic range, HDR10 and HDR10 + are in the game. On the sound side, DTS: X support is on the menu. 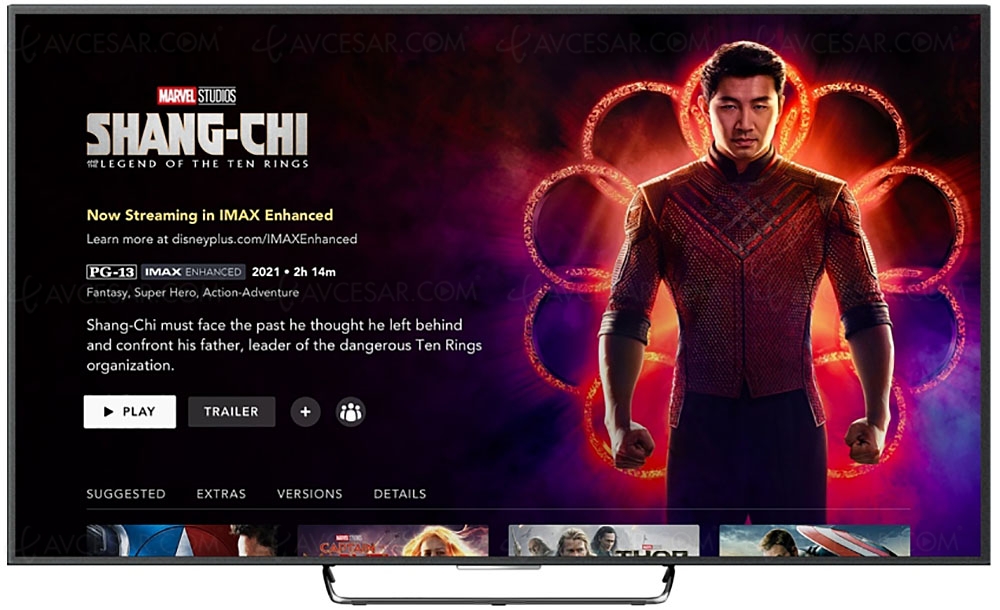