The king is dead, long live the king ! According to the latest US SVOD market report published a few days ago by market research firm Parks Associates, Amazon Prime Video has overtaken Netflix. An earthquake in the streaming market, and a situation still inconceivable for many analysts just a year ago…

According to new data published by the analysis firm Parks Associates, the streaming service Amazon Prime Video is therefore the one with the most subscribers in the United States.

The causes of Netflix's decline

In a recent press release, an executive from Parks Associates explained that Netflix had lost subscribers in the US for two consecutive quarters this year, which no doubt contributed to the rise of Amazon Prime Video. "Streaming services are introducing new content, services and partnerships that are changing the way consumers interact with video," said Jennifer Kent, vice president of research at Parks Associates. Netflix lost about 1.2 million more subscribers than it gained in its first two financial quarters this year. This was largely due to a mix of rising subscription prices at Netflix and ever-increasing domestic competition, although Netflix lamented other weaknesses. Among these, a loss of leading content, the cause of which dates back to the health crisis with the impossibility of filming films and series for many months, and the sharing of passwords between certain customers, a phenomenon against which the platform OTT has decided to crack down…

Netflix subscriber portfolio: better internationally than in the United States

The dynamic of the subscriber portfolio was somewhat reversed during Netflix's last fiscal quarter, when the company announced that it had added 2.4 million customers. But the vast majority of these are domiciled abroad. According to the latest financial report from the Netflix company, the SVOD service has continued to lose customers in the United States. Mainly under pressure from investors, Netflix recently introduced an ad-supported tier that brings the price of the service down to around $7 per month. A new offer that could revive the Netflix machine but this remains to be confirmed in the months and quarters to come.

If Netflix has, above all, tried to reorient its activities, Amazon has decided to significantly increase the amount of content offered on its Prime Video service. In March, Amazon bought MGM studios and its rich content library for $8.5 billion. The deal also includes premium cable movie network Epix (to be renamed MGM Plus next year); some Epix content has already started appearing in Prime Video. At the same time, Amazon made a pact with the National Football League to become the exclusive broadcast channel for most Thursday night football games, except for two that aired on NBC during the year. Starting next year, Amazon will also be offering a “Black Friday” football game in partnership with the NFL.

US streaming market, the competition is getting organized

Until recently, Netflix and Amazon Prime Video licensed content libraries owned by other distributors and studios. In recent years, this strategy has evolved into the development of original programming exclusive to each service, with mixed results. A strategy yet dictated by the content rights holders. Companies like Paramount Global, Walt Disney Company, and Warner Bros. Discovery have indeed scooped up the digital distribution rights to their popular and familiar TV shows and movies in an effort to bolster their own newly minted subscription services.

After paying more than $100 million to keep the series Friends for about a year, Netflix finally lost the rights to HBO Max in 2020. According to Parks Associates, for its launch that year, HBO Max emerged as the sixth-most subscribed streaming service in the United States. Outstanding.

For its part, Peacock, a streaming service launched by Comcast two years ago, was ranked among the top 10 streaming services by Parks Associates' OTT Video Market Tracker for the first year. The streaming service ranks ninth overall. Similarly, general entertainment service Disney Hulu and family service Disney+ ranked third and fourth, respectively, while its sports-centric ESPN+ appeared sixth on the list. One of the latest platforms, Paramount Plus, climbed to seventh place.

In short, Netflix has its work cut out to preserve its market share and will have to show ingenuity to ensure its growth (cf. Netflix is tackling big PC games?). As we can see, the sinews of war always remains the same on the video market, the possession of the rights to exploit the works. And in this niche, Netflix is a dwarf compared to Hollywood studios… 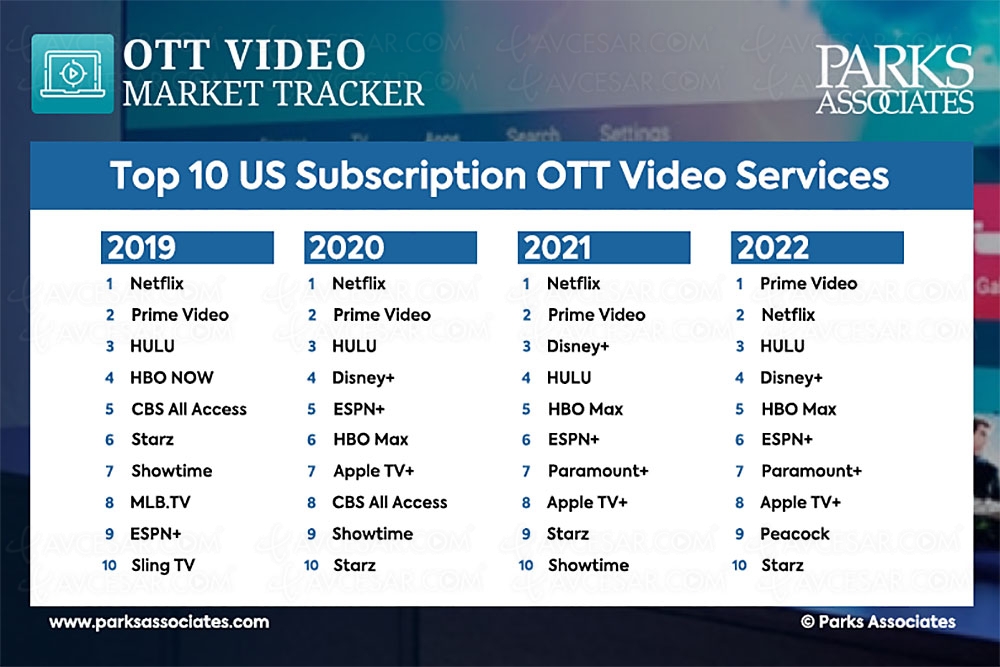