TV market 2022, from decline to decline

Predicted to be declining by all analysts in the screen industry, the TV market is expected to fall into decline in 2022 with a larger drop in volumes than expected.

Last May (see our TV Market 2022 news, growth forecasts revised downwards), a report by the analyst firm TrendForce suggested a lackluster TV market in 2022 with sales forecasts at 210 -212 million units compared to 217 million in 2021. With the possibility of a more significant drop if the unfavorable global situation worsens.

The latest TrendForce study released a few days ago indicates that the worst-case scenario is at work with a global TV market now expected to barely exceed 200 million units. According to TrendForce, global TV shipments in the third quarter were 51.39 million units. A figure up 12.4% compared to the previous quarter but down 2.1% compared to the same period last year. TrendForce analysts explain that the establishment is explained by a serious limitation of the consumer budget dedicated to consumer products, the fault of a growing inflation, even galloping, on the whole planet.

Last quarter 2022 expected to rise but…

This slowdown in sales has prompted television brands to offer promotions more quickly than usual. TrendForce predicts that sales in the fourth and last quarter of 2022 should increase by 10.8% to reach 56.96 million units. However, this figure would still be 3.5% lower compared to the last quarter of 2021 and would represent a new low for this period.

In the end, in the light of the war in Ukraine, rising inflation and rising interest rates, the 2022 TV market should be around 202 million copies, down 3.8 % compared to 2021. And constitute a low with regard to the last decade. 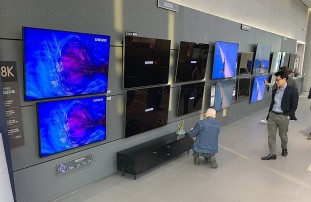