Traffic of the biggest websites from 1993 to today (video)

Evolution of the traffic of the most popular websites since the beginnings of the public internet, until today, from AOL to Google.

For the visualcapitalist site, the artist James Eagle has created a video (below) retracing the evolution of the traffic of the most popular websites since 1993, the year when the consumer web really began. At the time, 200 sites were accessible, while today there are 2 billion.

In the 1990s, internet access was by "dial-up", a telephone line also used to make calls, offering appallingly slow speeds by today's standards. The AOL portal was then king, reaching 400 million monthly visits in 2000 for 413 million Internet users during this period.

With the arrival of broadband in 2000, the Yahoo portal took off, reaching 5.6 billion monthly visits in 2004. From 2010, a series of unfortunate decisions sent Yahoo on the downward slope, consolidating the place of the small Google, which remains the most popular site at the beginning of the year 2022.

At the same time, we have been witnessing the rise of social networks since the 2000s. If YouTube and Facebook stand out, it is in particular thanks to their impeccable timing. They arrive in fact at a time when the smartphone is on an upward slope and contributes greatly to their success. YouTube and Facebook are the two most visited sites on the internet today, just behind Google. 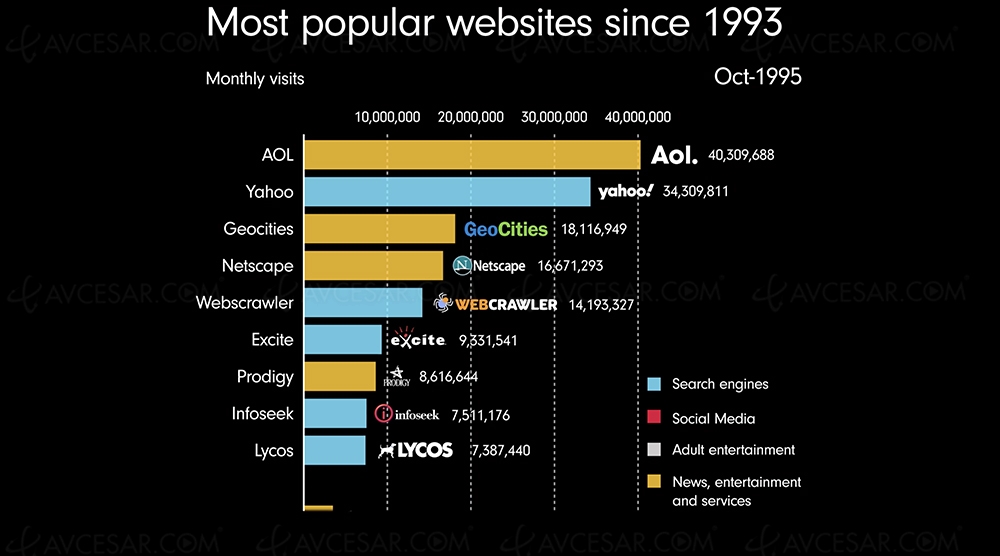