30.08.2022 • 10h05
Smart TVs contain storage capacities and computing power comparable, or even superior, to that of a tablet or a smartphone. These are used to install and operate a large number of applications. Therefore, why not also use them to "emulate" the functions traditionally performed by the Internet service provider's TV box? The manufacturer Samsung answers this question with its fully dematerialized TV box solution.
As soon as they appeared on the market, Smart TVs capable of connecting directly to the Internet, whether via Wi-Fi or the wired Ethernet network, offered their owners direct access to various streaming services. Likewise, they have become capable of onboarding or downloading a large number of applications and of using them without it being necessary to associate them with another element. Indeed, whatever the on-board operating system (Tizen OS, Google TV, WebOS, Vidaa, etc.), connected televisions have a dedicated application store to guarantee satisfactory ergonomics taking into account the constraints of use. what a TV presents compared to a smartphone, a tablet, or even a computer. 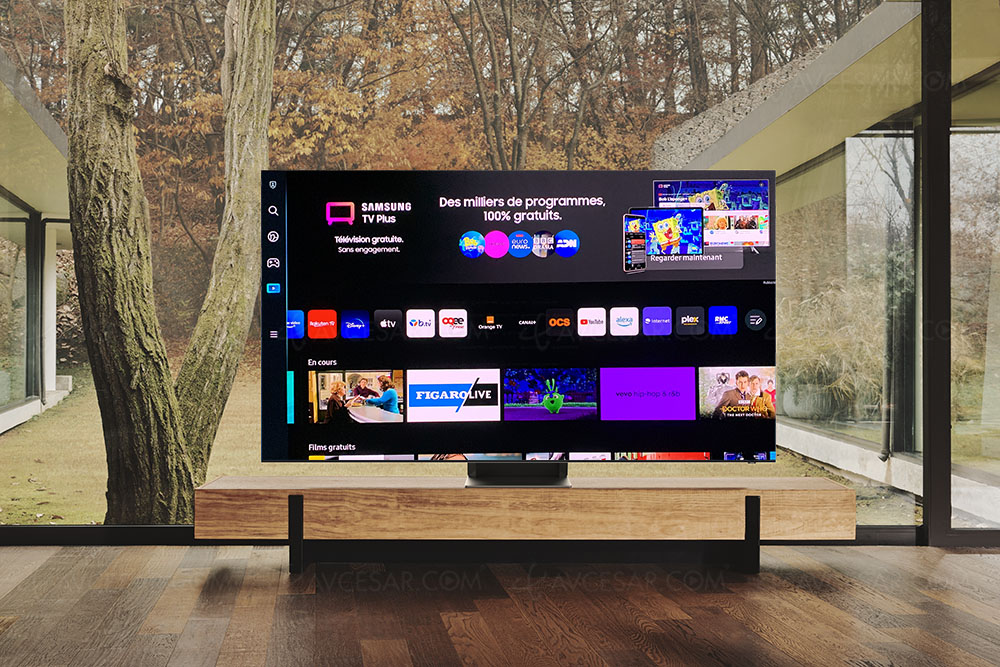 Box TV, present in many homes Who says connected TV says Internet service providers. And the latter systematically offer their customers DTT channels plus "packages" of thematic pay channels, access to which is conditional on the installation of an additional box: the TV box. A configuration adopted by more consumers each year, linked to the development of fiber in France, and now in use in a majority of homes. These channels broadcast in IPTV, that is to say in a form entirely comparable to that operated by Netflix or other sources of video streaming, use the same "pipes". However, they remain inaccessible without the possession of the sacrosanct TV box box. Explanations: if one of the missions of the TV box is to convert IPTV streams into a standard video signal compatible with any traditional television, it also has the function of controlling the access rights to each thematic package allocated to its owner and to whether or not to authorize its decoding.

Current Smart TVs have more than enough computing power to perform the operations and checks carried out by the TV box. In fact, to remove it and charge the television to manage access and decoding of each program, the problems were more technical than commercial. Thanks to its privileged relationship with French ISPs (Internet Service Providers), through their common experience on TV decoders, Samsung has therefore entered into various agreements to offer its television sets the possibility of directly managing access to television channels. through pre-installed apps. Simply select them to benefit from the associated dematerialized TV box.

Dematerialized TV box, operator offers At Orange, a subscriber can benefit from the Orange TV application on a television other than the main one. As stated, the latter corresponds neither more nor less to the dematerialization of the TV box within Samsung Smart TVs. The application indeed offers all the functionalities of the decoder/TV box (live, replay, recording, management of user profiles, several concurrent screens, VOD access). Subscription to bouquets is still managed via the Orange website. To activate it, nothing could be simpler, just enter your identifiers: - This gives Orange customers the possibility, who must have a TV box, to enjoy IP TV on a second television in the home without needing an additional decoder/box, provided that it bears the Samsung logo. Interesting also for the television of a second home or a place of vacation. If in any case, you have to pay an additional €5 per month to take advantage of the Orange TV option (customers with the Orange Up and Orange Max offers can normally request to benefit from it for free). - For the specific case of customers Sosh, the Orange TV application only works on smartphones, tablets and PCs. To enjoy it on TV, you have to go to the cash register and receive the TV box (see the Orange site). 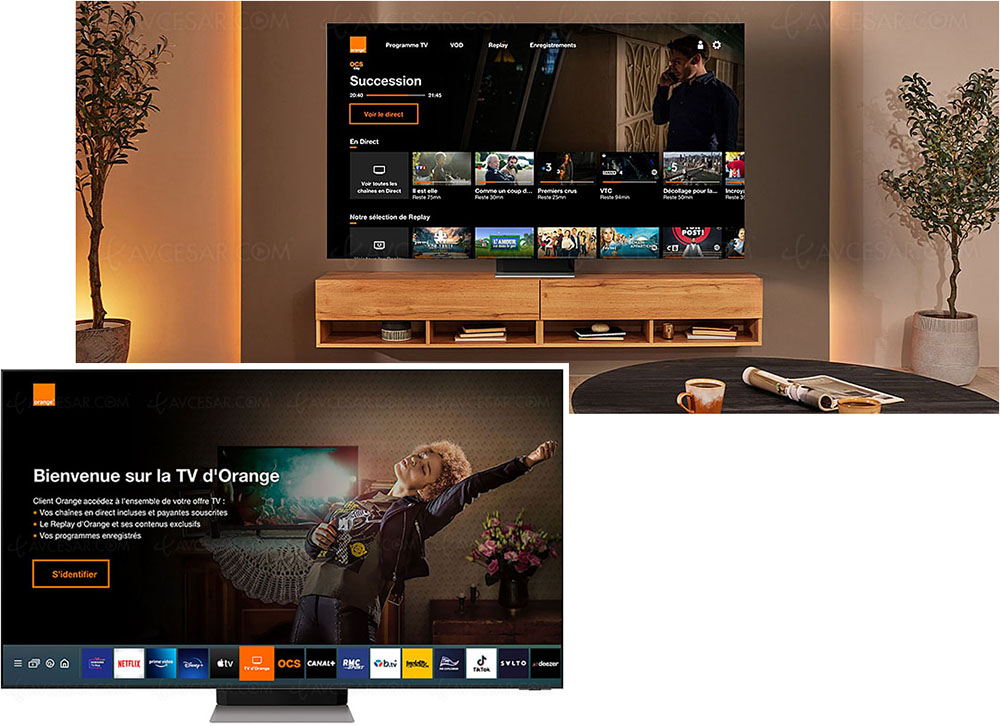 The various dematerialized TV box applications all offer all the functionality of decoders/ enclosures. Very easy to use, all you have to do is enter your identifiers to activate them.

At Free, all subscribers to a fixed offer (except subscribers to the Delta S offer without the TV option), without distinction, have free right since June 28 to the Oqee application. As with Orange, Free subscribers must always have the French internet troublemaker's TV box at home. 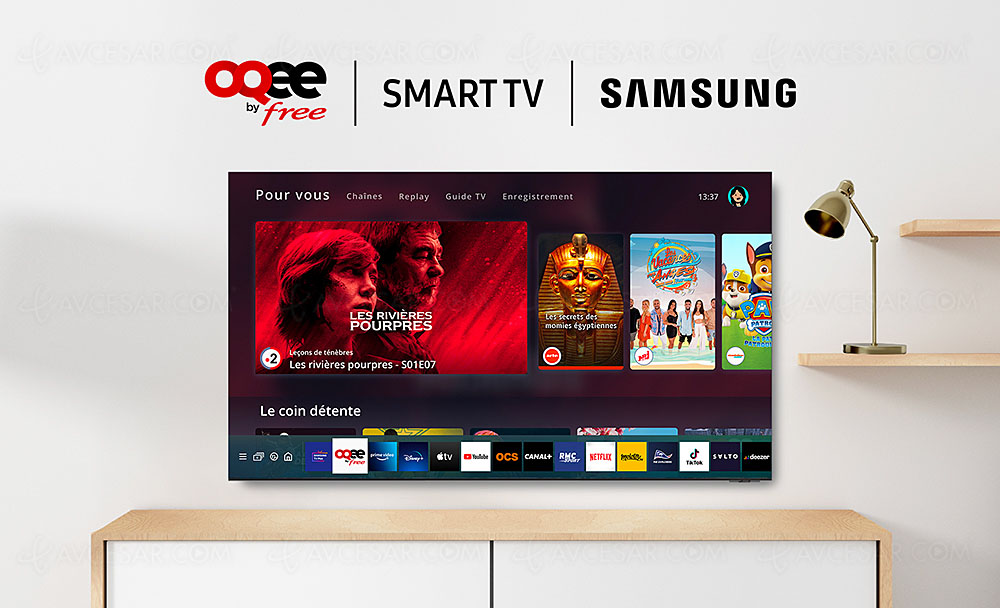 Bouygues Telecom is the exception that proves the rule. The Bbox Smart TV offers associated with a Samsung Smart TV give direct access to the B.TV+ application, without the need for a TV box. And the operator also gives its subscribers who have subscribed to another of its offers the possibility of access to the B.TV+ application for the monthly sum of €6.99, still of course without the need for an additional TV box. . 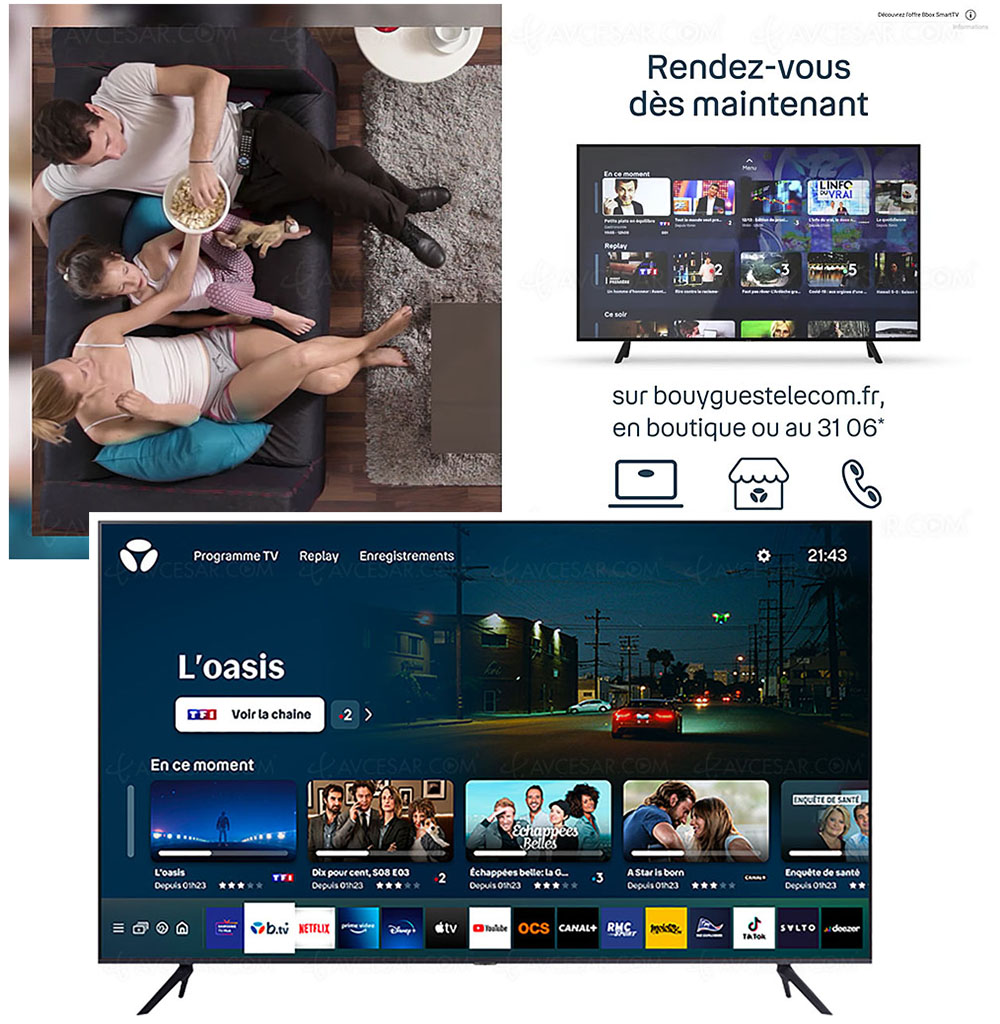 Of the band of the four largest internet service providers, remains the case of SFR. If these offers are currently devoid of a dematerialized TV box application, the firm would work hard on it. Thus SFR would join Bouygues Telecom, Free and Orange in the era of the virtual TV box and Samsung would then be the only TV manufacturer to offer a family of applications capable of replacing the TV box for all the most important ISPs present on the French market. Dematerialized TV box, what interest for the consumer? For the end user, the dematerialization of the TV box offers multiple advantages. Firstly, it simplifies installation: disappearance of a box near the television set, the connection cable(s) and release of an HDMI socket. Then, in certain configurations (see above), it saves the rental costs of the TV box which, even if they are only a few euros per month, end up constituting a significant budget on the year. It should be noted that if the TV box is completely dematerialized, the subscription costs linked to the various thematic packages remain of course unchanged. 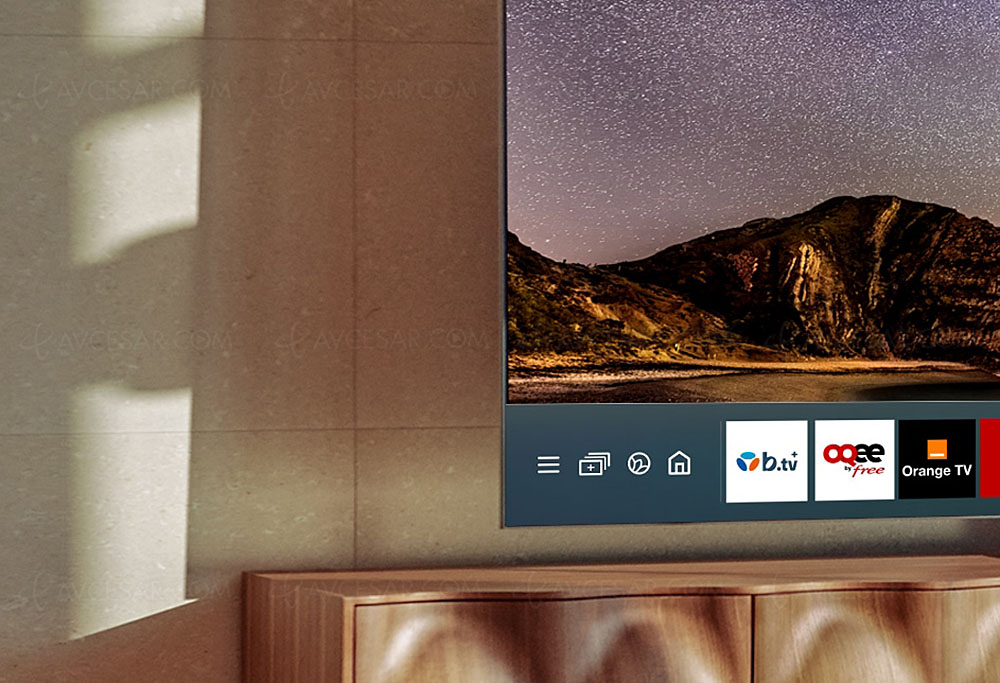 Another substantial advantage linked to the dematerialization of an additional TV box, a saving energy, therefore a financial saving on the user side. Not to mention the cost of production, always in energy but also in raw materials, of the so-called TV boxes. Weighty arguments while sustainable development and global warming are increasingly important issues in our consumer society. Dematerialized TV box, hello multi-screen use In absolute terms, and in all cases, the dematerialization of the TV box is therefore technically possible. Similarly, there is nothing to prevent, still on a technical level, the deployment on as many television sets as desired of the TV box emulation application, on the same subscription. This is a functionality that becomes comparable to multi-screen use. 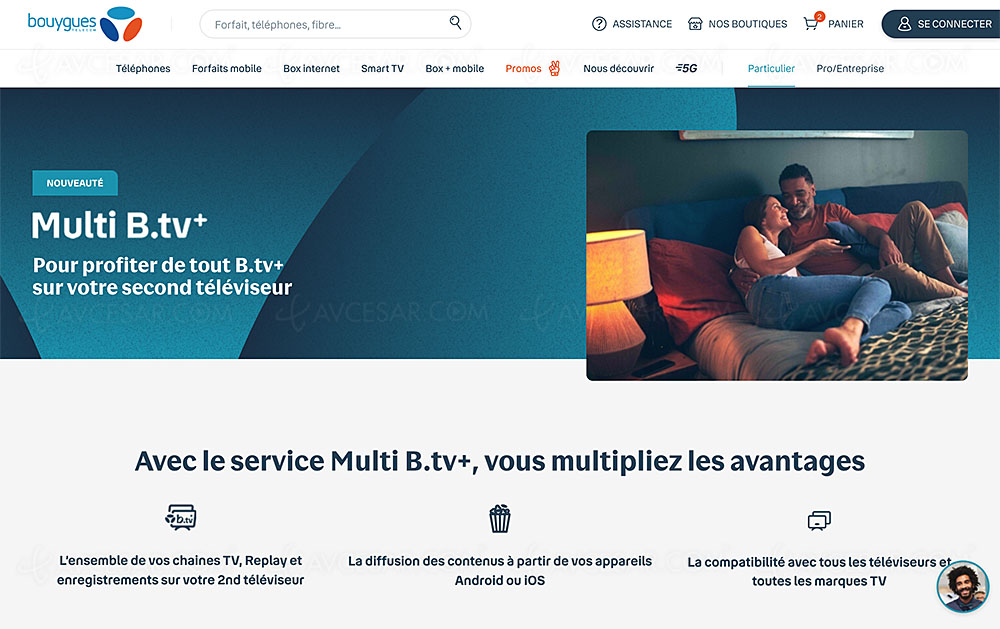 In fact, here again, everything boils down to questions of agreements between the ISP and its customer. If, as already mentioned, in most cases the possession of at least one TV box remains essential, the number of televisions that can be connected simultaneously varies: five at Free, two at Orange. Another advantage of this dematerialized TV box solution is that you can take your TV offer with you everywhere you go, to enjoy your channels and programs on vacation, for example via your login/password (on the express condition, for Bouygues and Free, of being connected via an associated Wi-Fi network: impossible to take advantage of Free's dematerialized TV box on a Bouygues network, for example). Dematerialized TV box, a single remote control to control everything Finally, the dematerialization of the TV box also means the end of the proliferation of remote controls. Only the TV remote control remains essential to manage all the features. Similarly, Samsung wanted to offer these “Dematerialized TV Box” applications excellent ergonomics. As is tradition with the Korean manufacturer, they run on Tizen, the brand-specific OS. In addition to simple access to the various thematic programmes, Replay, Start Over or recording are also available in the same way as native 4K Ultra HD broadcasting if the program is available in this format. 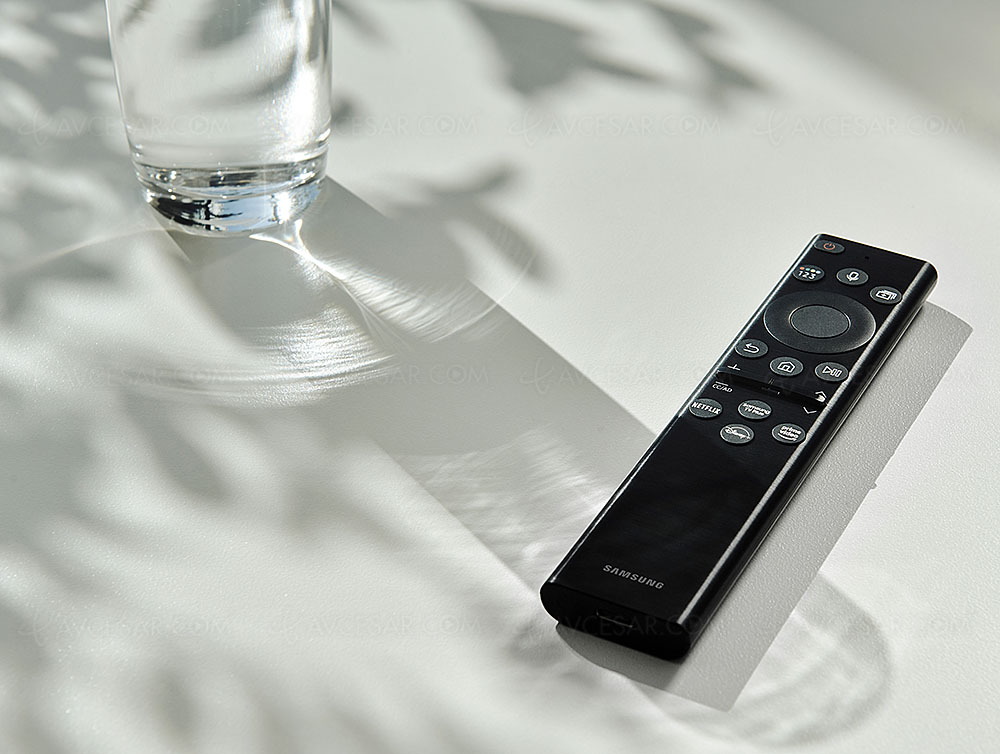 We repeat, Samsung is today the only brand to have, within its television sets, exclusive applications likely to replace the TV box of the main internet service providers present on French territory. An undeniable asset, given the number of households that receive television channels via box. On the other hand, Samsung has not done things by halves, compatibility with dematerialized TV box applications concerns many of the brand's Smart TV references, even those marketed since 2018.