A technological first from Intel, which should pave the way for the future of consumer video streaming in Ultra HD 8K format.

Intel recently demonstrated via the internet the very first live broadcast of a UHD 8K HDR 60fps stream of the Olympic Games from Japan to the United States.

Without going into too much detail, here is the flow of this stream, initially captured by the Japanese broadcaster NHK in 8K (7 680 x 4 320) at 60 frames / second and HDR HLG 10 bits. Requiring a bandwidth of 48 GB / second (huge!), The stream was sent via optical fiber to the Olympic broadcasting service. This was encoded and compressed using the HEVC codec on a server equipped with four Intel Xeon 8380H processors. Note, encoding and compression were performed in near real time with a latency varying between only 250 and 400 milliseconds.

An Intel PC to decode the 8K stream

The signal was then distributed on a public cloud service, then broadcast in Los Angeles for the trade press. The stream was picked up by a gigabit Ethernet router, using a Windows 10 PC via Wi-Fi 6E and decoded in real time by the Spin Digital Player V2.2.2 to be played on an 8K Ultra HD TV 75 ”Connected via HDMI 2.1 from an Nvidia GeForce RTX3080 graphics card (see illustration below).

All in all, from capturing in Japan to posting in Los Angeles, the process generates a latency of 2.5 to 4 seconds. Intel specifies that this is only a technical demonstration, not available to the general public at the moment. But as 8K becomes popular, the technologies around streaming should adapt to provide consumers with quality streaming. Source: Tech Hive 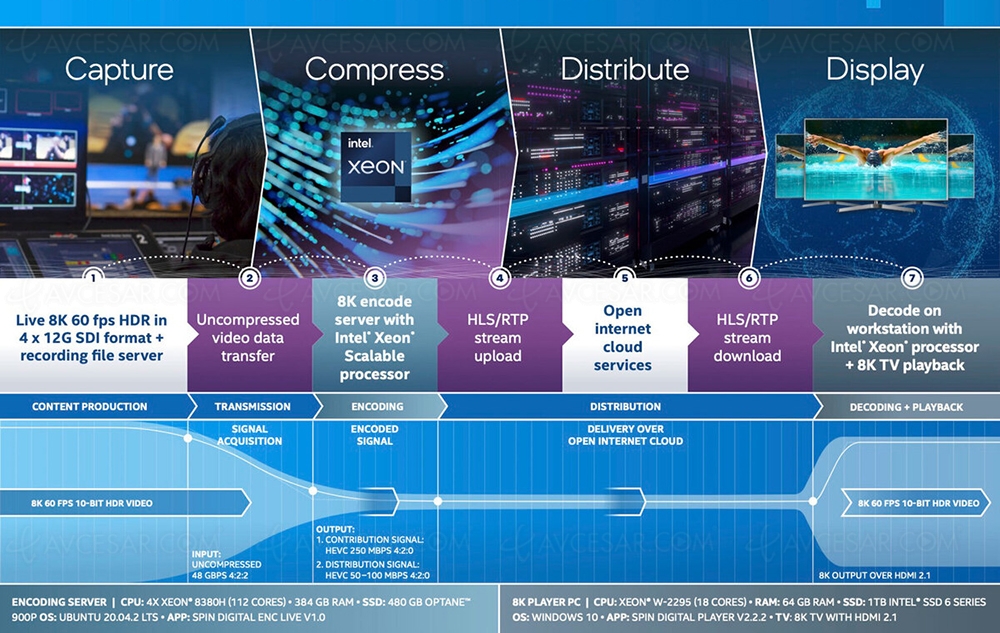