From 1993 to today: evolution of the mobile phone market

Today within everyone's reach, mobile communication only affected a select few when it first started, in the 1980s.

The Visual Capitalist site illustrated in a video (below) the evolution of the market shares of mobile phone manufacturers between the end of 1992 and the end of 2021.

Yes, even if the smartphone did not yet exist, the mobile phone was already in the pockets of a few privileged people, and this from 1983 with the very first model signed by Motorola, the DynaTAC 8000X. The device then cost nearly €4,000 and offered an impressive autonomy of… 30 minutes.

Ten years later in 1993, Motorola is the leader in a market it shares with Nokia. But of more than 50% of market share then, Motorola is today around 2% only. Competition indeed arrived in successive waves with Sony and Siemens in the 90s, then Nokia which dominated the sector from 1999 with in particular the Nokia 7110, the first mobile to offer an internet browser.

2007, launch of the Apple iPhone and the beginning of the smartphone era

Another decisive date, 2007, witnessed the arrival of the first Apple iPhone, the beginning of the smartphone era. At the end of 2021, Apple held 27.3% of the global mobile market, just ahead of Samsung with 27.8%, which was inspired by the innovation signed Steve Jobs. 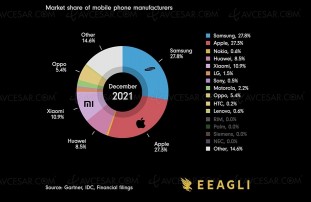