28.11.2021 • 09h03
Last June, we made a first report on the Chinese manufacturer TCL, following the presentation at CES in Las Vegas 2021 of a Mini LED TV series at attractive prices, the C82 (cf. TCL, the Chinese manufacturer who dares to innovate ). Six months later, or almost, TCL has become an indisputable leader in this technology, notably with the C825 / X925 series and, above all, the presentation of the 85X925 Pro model (85 '', 216 cm) equipped with the OD Zero process - premium declination Mini LED backlight signed TCL- which will be one of the stars of the next CES show in Las Vegas 2022. The opportunity to come back to the brand's Mini LED TV offer.
The TCL 85X925 Pro model has therefore just been awarded the CES 2022 Best of Innovation Awards awarded by the prestigious Consumer Technology Association (CTA) in charge of the interests of the consumer electronics industry in the United States and, among others, organizer of the unmissable CES show in Las Vegas. 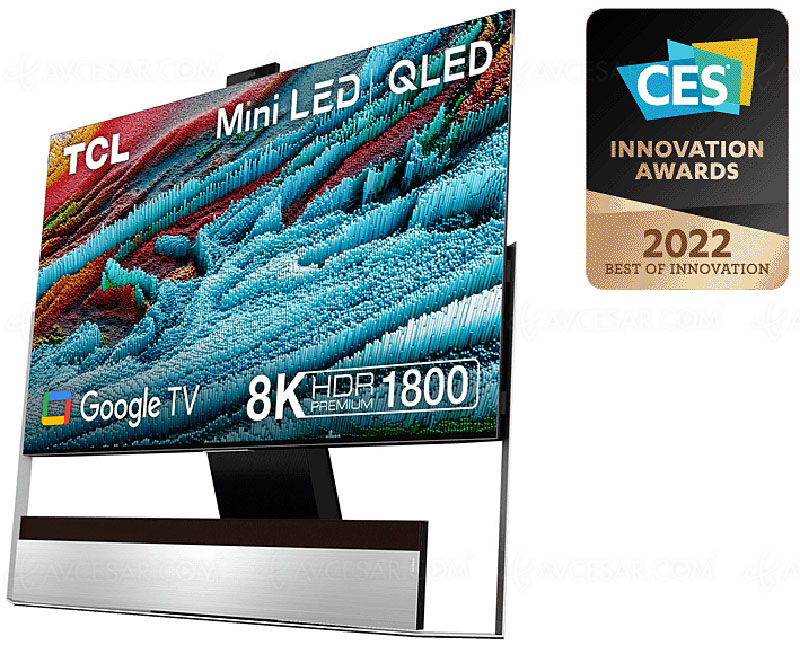 A great recognition of the technical expertise of the Chinese manufacturer on the part of the EGP industry. Mini LED, several technologies signed TCL In addition to this distinction for the latest TCL televsion, if we have decided to come back to the 2021 TCL Mini LED TV offer, it is because rarely has a brand been so innovative in such a short period of time. Judge for yourself, after offering the first TV of its kind at the end of 2019, the TCL X10 (see photo below), the year 2021 saw the Chinese manufacturer market three new Mini LED TV series that are very different from a technological point of view with a total of five references, Ultra HD 4K and UHD 8K. 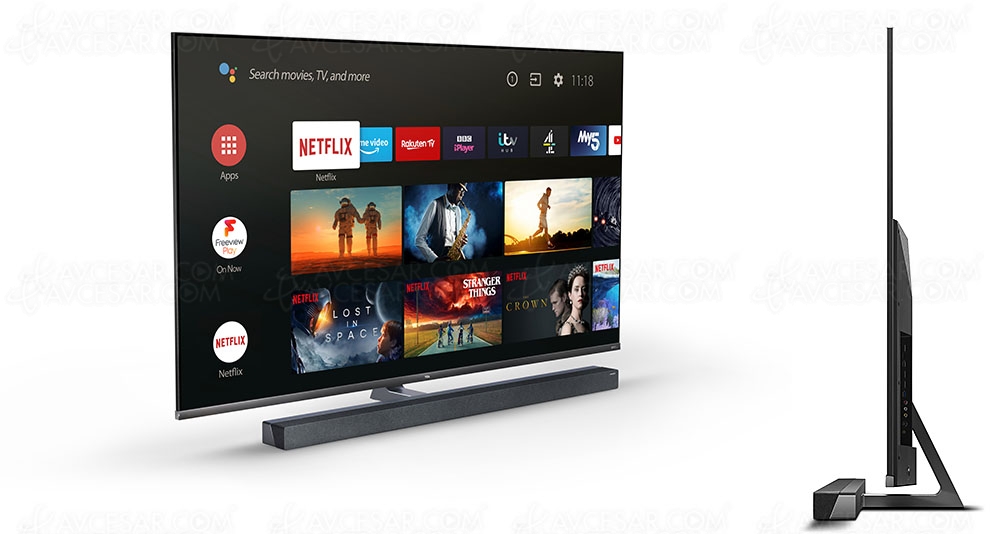 The first, the C82, presented at CES in Las Vegas last January, has been available in stores since this summer. The X925 Pro, unveiled in China in March 2021 under the name X12, is expected in the following days (indicative price estimated at around € 10,000), while the X925 has been on sale for a few weeks. As a result of the races, TCL is the only brand to offer several Mini LED technologies in 2021, with 225 μm diodes on the C82 / X92 specimens and 152.4 μm on the TV 85X925 Pro (see photos below). The latter, in addition to leading performance, also allows a new design for an LCD screen, in particular an extreme thinness of 9.1 mm, a feat still unmatched by Oled TVs. 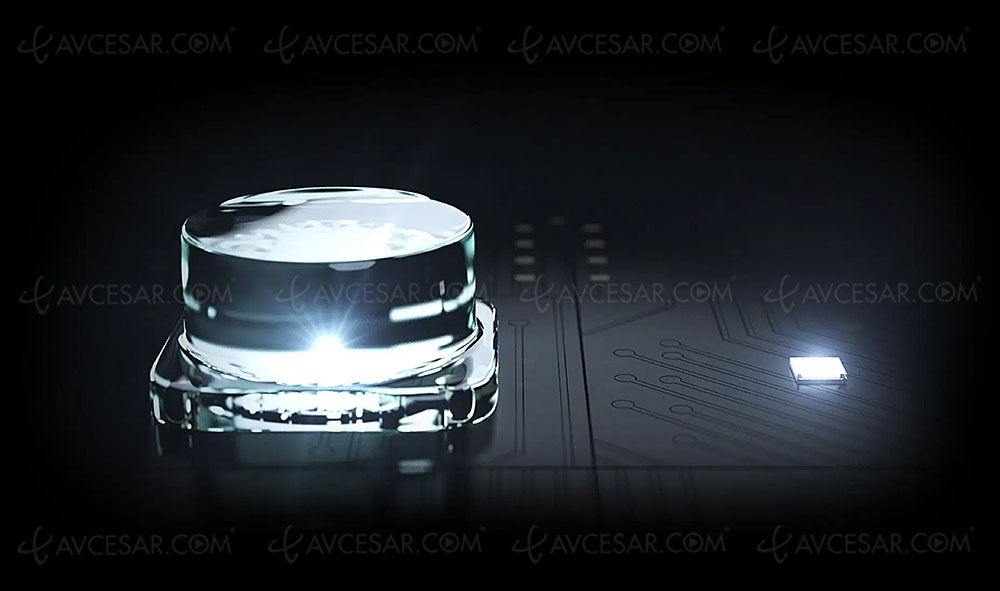 With Mini LED technology, TCL obviously aims to do better than its competitors and their LCD range, but also better than White Oled televisions. And at all levels: aesthetics and image quality. Zoom in on the TCL 85X925 Pro OD Zero, flagship of the brand The innovative Mini LED OD Zero process, third generation Mini LED signed TCL, it should be remembered, is at the heart of this strategy with an extraordinary miniaturization of the backlighting system. And it starts with the diodes. While the size of these was 3000 μm (3 mm) on the first 8K TV unveiled by the brand at CES in Las Vegas 2019, the TCL 75X91, it is now 152.4 μm (0.1524 mm ) on the TCL 85X925 Pro. This feature allows them to be multiplied on the back of the LCD panel, up to several thousand (compared to only a few hundred on a classic Full LED Local Dimming system), making it possible to significantly increase the number of independent light control zones, therefore the precision of the image. Each of these areas, much smaller than on a conventional LCD TV, allows a portion of the image to be managed very precisely to eliminate the blooming phenomenon, to display a generous (up to 1,500 nits) and homogeneous brightness or, at least. On the contrary, blacks of abysmal density never seen before on an LCD diffuser capable of supporting the comparison with those of an Oled screen. 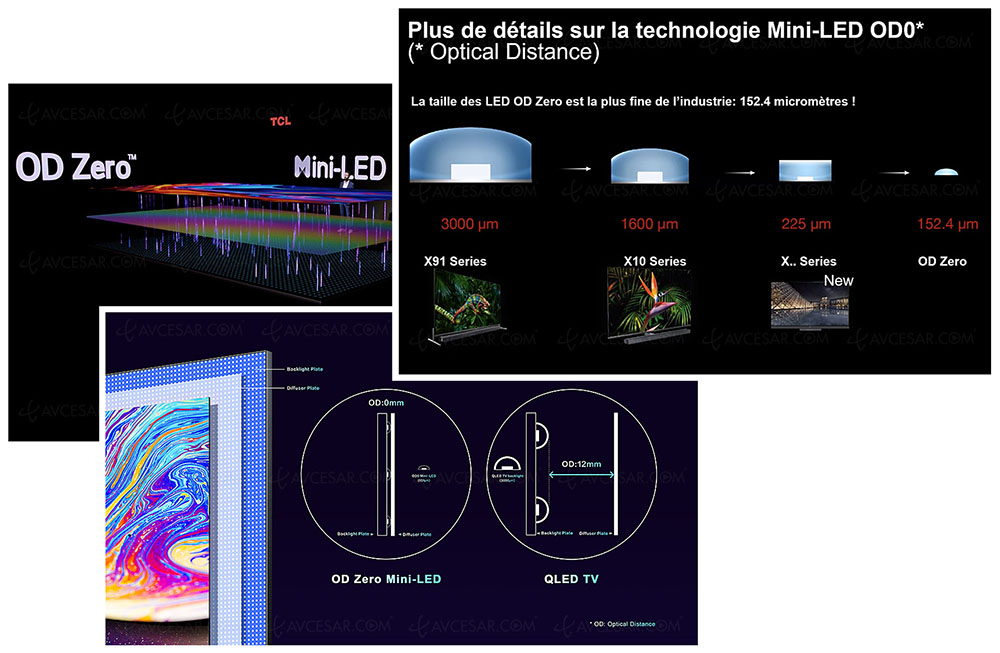 With OD0 technology, TCL's objective is to offer LCD televisions extremely thin and comparable to TVOled in performance.

Another advantage of OD Zero technology (or OD0 for Optical Distance 0), always linked to the tiny size of the diodes, the associated diffraction lenses of extremely small size too, with the consequence of a distance between the backlighting system and the LCD panel reduced to zero (hence its name). Thus, the concerns of light diffraction which inevitably occur on conventional LCD TVs, associated with the distance traveled by the light between the diodes and the liquid crystals of the panel, completely disappear. The illumination generated is visibly homogeneous for an increased perceived precision of the image (as a reminder, the eye is extremely sensitive to contrast). Ditto for the accuracy of the colors which benefit over the entire surface of the screen from a constant supply of light. Finally, we should look no further than the OD Zero process to explain the exceptional fineness of the TCL X925 Pro, less than a centimeter (see photos below). As a reminder, on an LCD screen, the “optical distance” oscillates between 12 mm and 25 mm depending on whether it is equipped with a classic Full LED Local Dimming or Direct LED Global Dimming backlighting. Thus, this television, equipped in addition to an Onkyo 5.1.2 audio sound bar (160 W of power) achieves the feat of being elegant and discreet despite a huge diagonal, and relatively light compared to its competitors of same screen size. 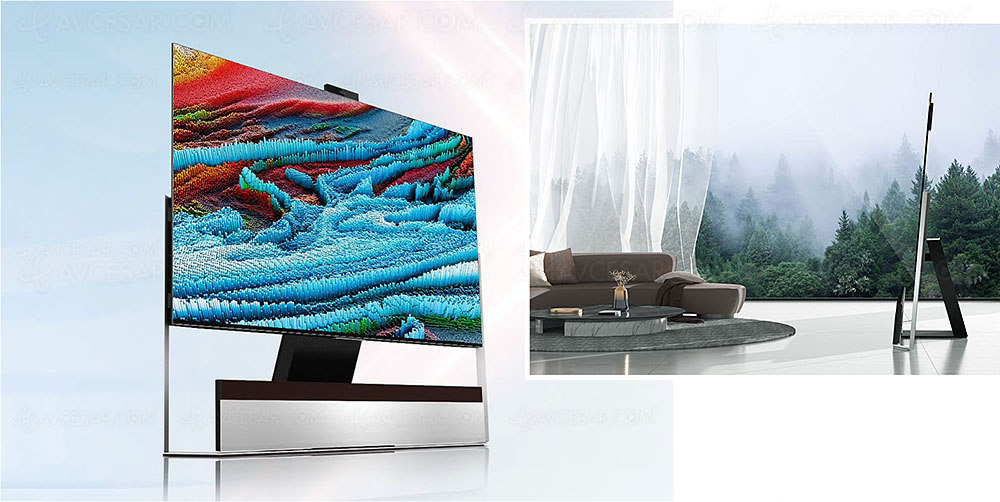 TCL 85X925 Pro, main specifications Of course, the TCL 85X925 Pro television benefits from the best equipment of the moment in terms of components of course but also of technologies and functions. In addition to the finish, the sound bar and the Mini LED OD Zero process already mentioned, we can also mention an Ultra HD 8K definition (8K Association certification on the menu), a native 100 Hz panel measuring 216 cm in diagonal, the Quantum Dot nanocrystals (TCL, one of the two main designers of this technology has 350 QLED patents), the Google TV Smart TV function (integrated Google Assistant), a motorized camera (for calls or video conferences with the Google application Duo), voice or gesture control, the Imax Enhanced and Works with Alexa labels. Not to mention Wi-Fi 6, Dolby Vision IQ, HDR10 +, Dolby Atmos and FreeSync compatibilities, HDMI 2.1 with VRR, ALLM, 4K / 120 and eARC management… 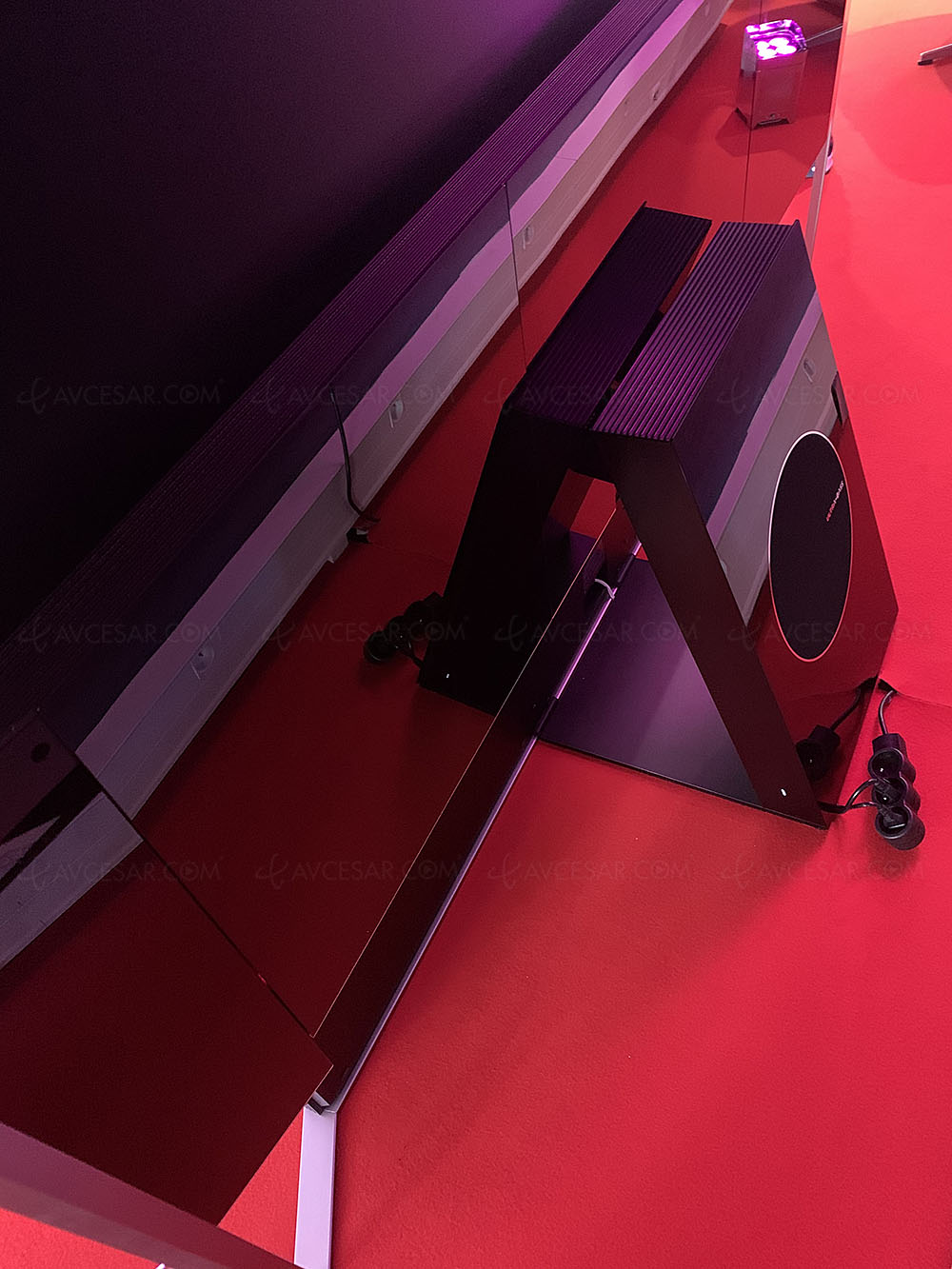 TCL 85X925 TV stand Pro is part of Onkyo's 5.1.2 audio system. It actually hides the subwoofer. To learn all about the specifications of the TCL 85X925 Pro, a true technological showcase that incorporates all of the manufacturer's know-how, go to the bottom of this news for a complete list. TCL X925, Mini LED 8K 65 '' and 75 '' televisions The flagship TV Mini LED 8K TCL 85X9025 Pro drains in its wake two less exclusive but equally ambitious references, the TCL 65X925 and TCL 75X925. In short, except for the diagonal of the screen, the OD Zero process and the 5.1.2 (160 W) soundbar replaced by a 2.1 (60 W) model, these televisions offer identical characteristics to those of the X925 Pro. Their luminous peak beyond 1000 nits allows a premium audio-video experience for a price significantly more affordable than that of the X925 Pro, namely € 2,999 for the TCL 65X925 and € 3,999 for the TCL 75X925. 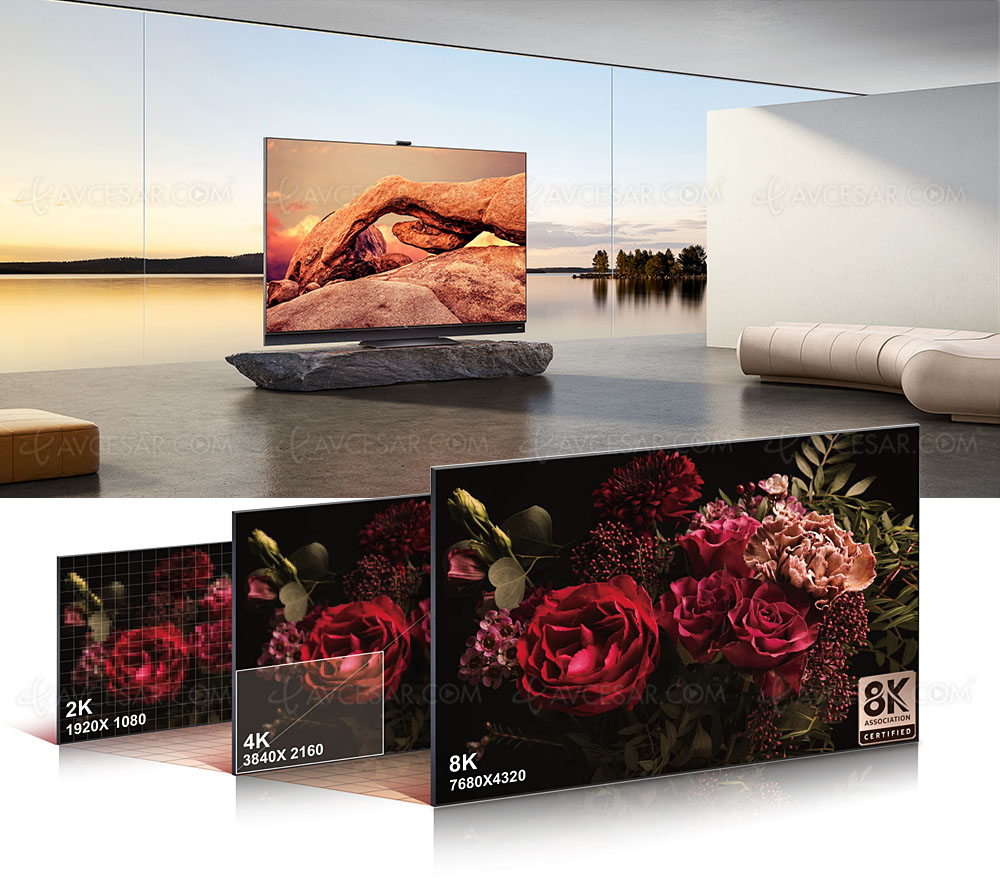 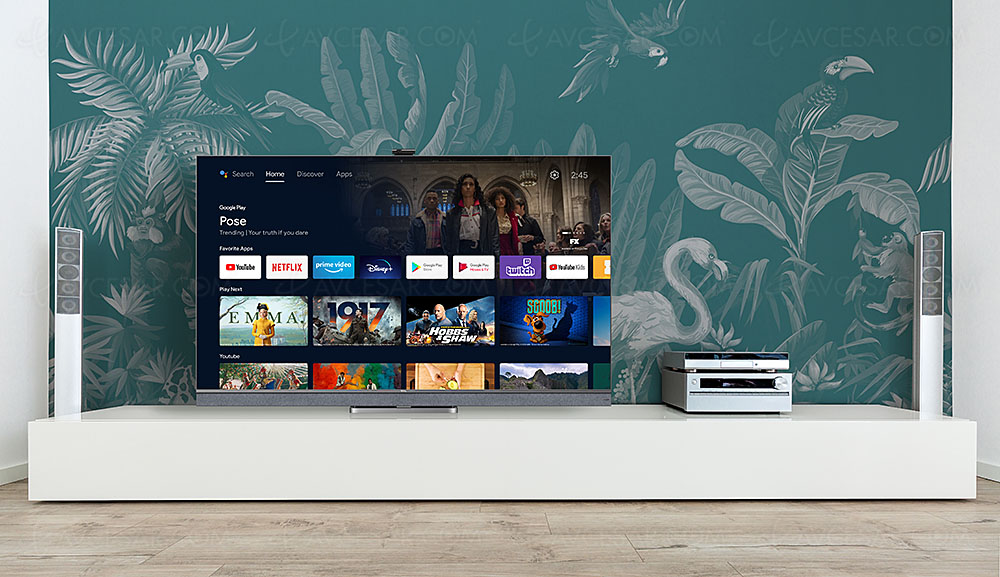 TCL Mini LED TV, HDMI 2.1 lens The Chinese manufacturer has provided all of these Mini LED televisions with HDMI 2.1 connectors equipped with all the features of the standard, with the goal of full compatibility with new content sources, PlayStation 5 and Xbox Series S / X in particular. TCL intends to maintain its rank among video game enthusiasts with screens capable of perfectly handling signals from a new generation home console or from a PC computer, deemed to be the most restrictive, with an Input Lag of less than 15 milliseconds. Thus, VRR (Variable Refresh Rate) function, G-Sync and FreeSync allow, depending on the source, a fluid display devoid of Tearing problem (image breakage well known to players) for incredibly immersive gaming sessions. 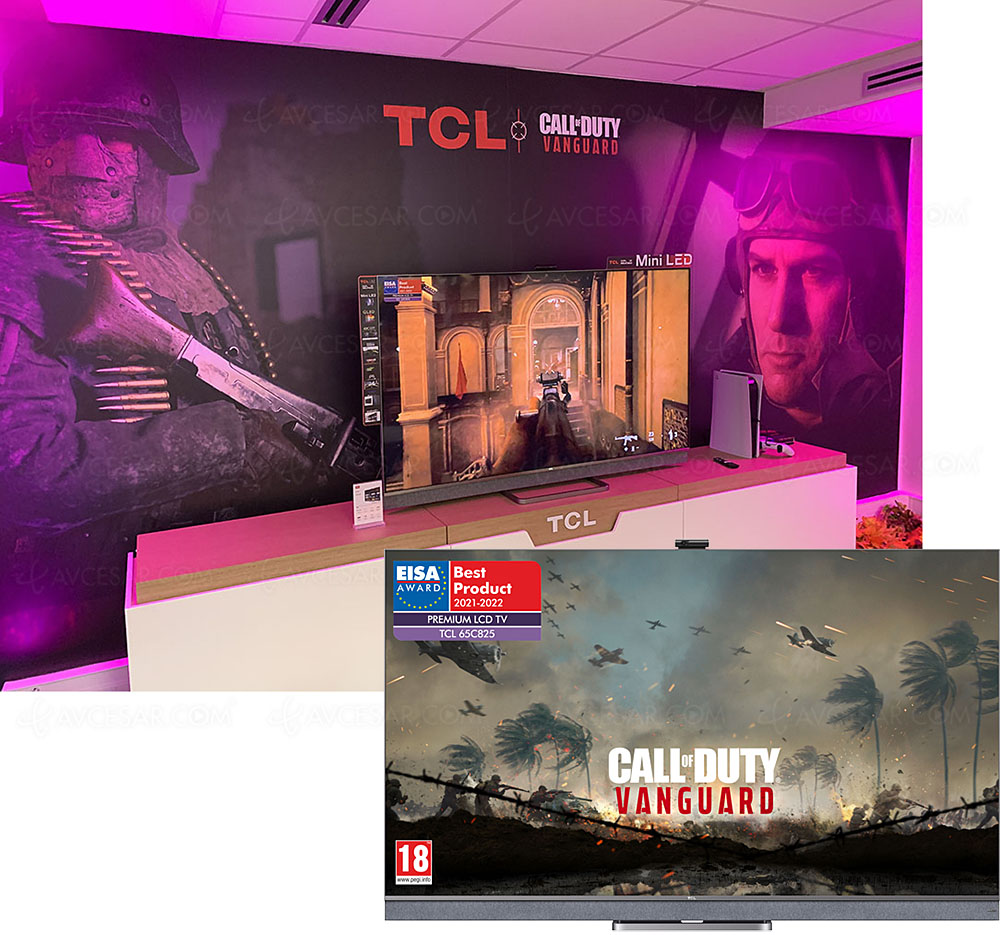 and FreeSync capabilities of

through a partnership with

And since a demo is always better than a long speech, TCL has tied the knot with Activision, the publisher of the ultra-popular Call of Duty game series. Official partner of the latest installment in the saga, Call of Duty: Vanguard, TCL demonstrates all the benefits of technologies embedded in its Mini LED TVs with an FPS title known for its unbridled action, very demanding for screens. 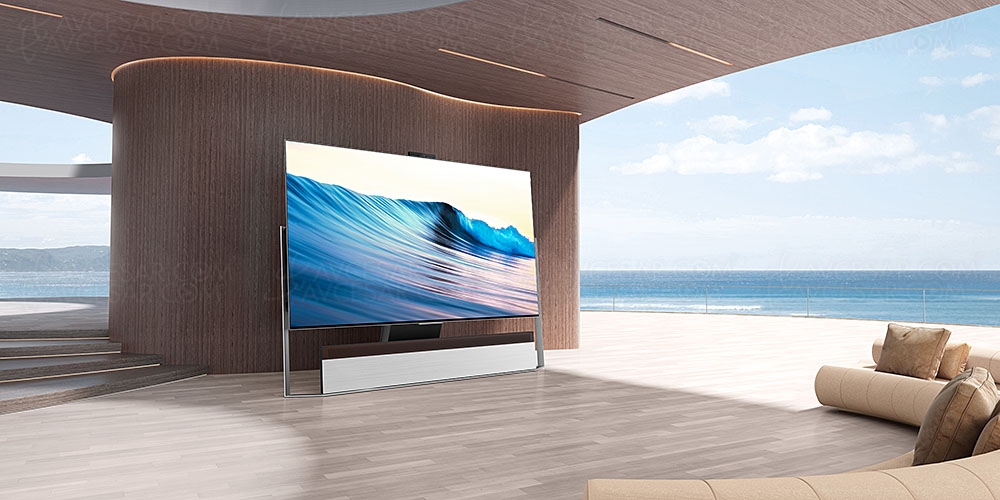