The various analysts seem not to be on the same wavelength when it comes to ranking the most popular mobiles of 2021.

According to Omdia (via Gizmochina), the Samsung Galaxy A12 occupies the first position of the Top 10 best-selling smartphones in 2021.

A ranking that globally includes the same models as a similar list recently published by another analysis firm -Counterpoint Research- but not necessarily in the same order. Indeed, manufacturers do not publish all their detailed sales figures, and analysts must manage to retrieve and extrapolate this data.

With 51.8 million units sold, the Galaxy A12 therefore finds itself first here, while it is 6th in the other ranking. It is followed by the iPhone 12 with 41.7 million units, which for its part is in first position in the other Top. And knowing that the iPhone 12 is sold on average five times more expensive than the Galaxy A12, we realize that it is Apple who wins in terms of turnover even if the brand is not first in terms of volume.

Xiaomi finally not so beautiful in 2021?

Otherwise, there is only one Xiaomi model here - the Redmi 9A - while there are two in the Counterpoint ranking. Conversely, Samsung is represented here by two models, while it only has one in the other Top. 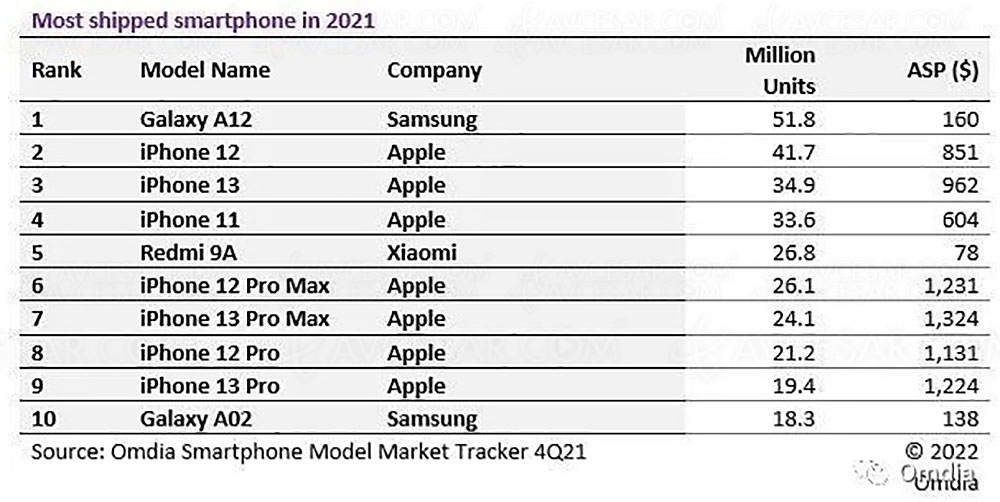