The Medialight MK2 Flex, for a better TV picture and avoid eye fatigue

As for the calibration disc for UHD 4K TVs (see our news Spears & Munsil Ultra HD 4K HDR screen calibration disc for amateurs and professionals), the start of the school year is the opportunity to come back to an accessory that quickly becomes essential. once tried, the famous The Medialight lighting system now available in MK2 Flex version, for a better TV picture and to avoid eye fatigue. Created in the United States, it is finally distributed in France. Used by image professionals for their calibration in the studio, it improves the quality of the image displayed on a television set and drastically reduces, or even eliminates, eye fatigue. Good news, you can now enjoy The Medialight MK2 Flex in your living room.

Stressful life, multiplication of screens in our daily lives with for example those embedded in cars or the increasingly important use of smartphones, computers breaking into everyone's professional life, lack of sleep… There are plenty of opportunities for our eyes to be put to the test. And if the pleasure of a Home Cinema session, frenzied video game games on the big screen or even a thrilling sports broadcast (in the dark of course for maximum image quality) does not falter, it still remains. a problem that we all suffer from one day or another: eye strain. 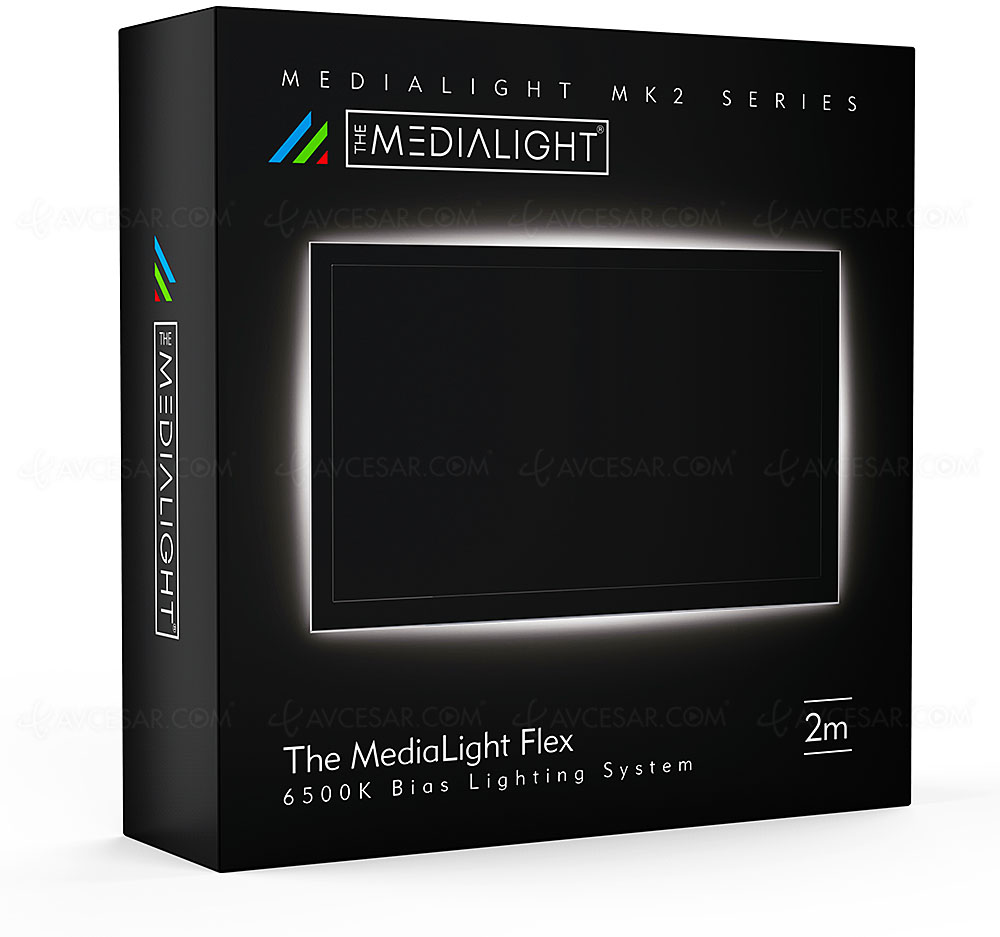 From the professional to the general public

A well-known problem in the image professions where stakeholders spend most of their time in studios, plunged in the dark in front of a multitude of screens to calibrate the works intended to be used on television as well as possible, on OTT platforms, in cinema and on video. To alleviate this concern, professional calibrators use a magic tool, an auxiliary light set on a very precise color temperature in order to relieve their eyes (see photo below). 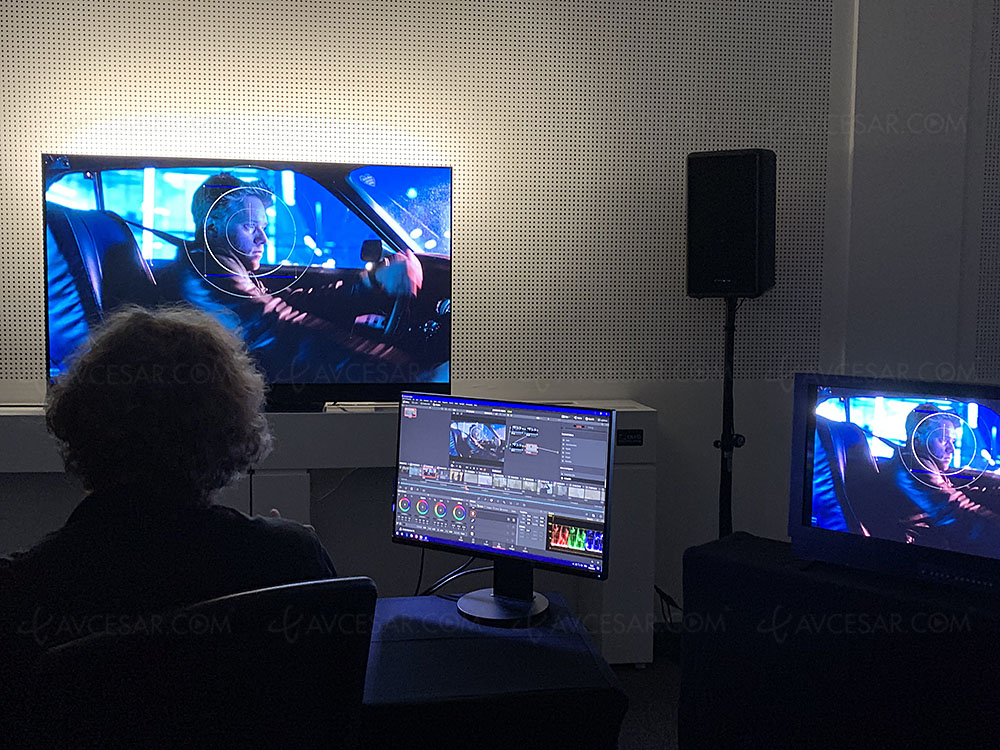 With The Medialight MK2 Flex, it is now possible to use this tool at home, in your living room, your dedicated Home Cinema room or even in your bedroom. In addition to soothing our pairs of eyes, The Medialight MK2 Flex magnifies the quality of the image displayed on the screen. The product is in the form of an adhesive strip made up of white LEDs with its associated power cable, equipped with a USB connector. Once installed (see below), behind the TV screen, The Medialight MK2 Flex is extremely discreet. 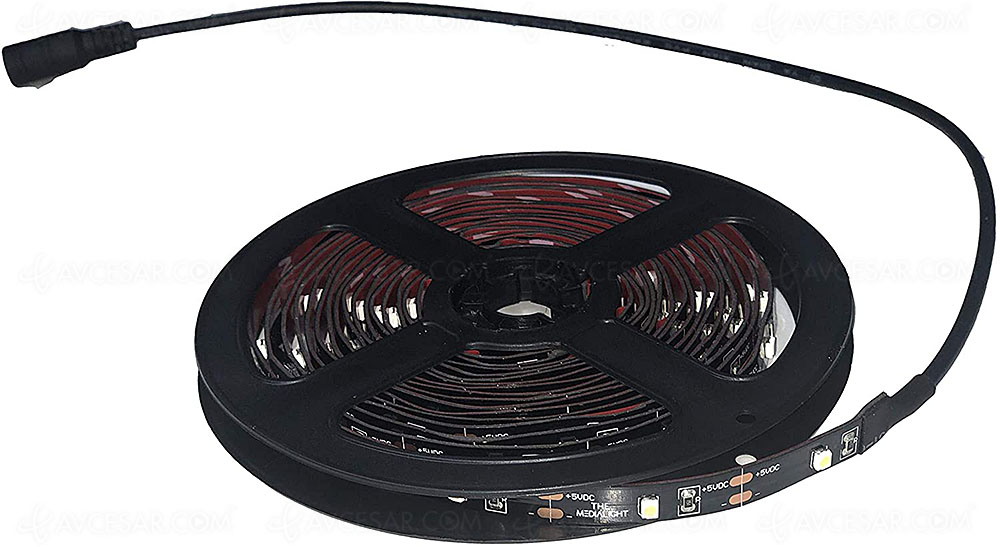 In short, these LEDs generate ambient light, like the Ambilight process of Philips TVs but with professional specifications. This is white, at 6500 ° K CCT (correlated color temperature) certified by ISF, which is perfectly identical to that of the reference white used for professional monitors. It is also endowed with a CRI index (Color Rendering Index, called CRI in English) above 98 out of 100 (this value indicates the capacity of a lamp to allow precise distinction of colors). It therefore does not alter the colors displayed on the TV screen in any way.

In the end, this white halo offers two essential advantages: firstly, eye fatigue, increasingly present with the emergence of HDR TVs at high peak brightness, is greatly reduced; then the perceived contrast on LCD TVs is significantly improved. Indeed, in the same way that a gray bar appears darker on a light background and lighter on a dark background (see the visual below), the density of blacks on an LCD screen becomes more dense. and dynamically in the presence of indirect lighting, especially when this is placed clothing (ie behind the screen). 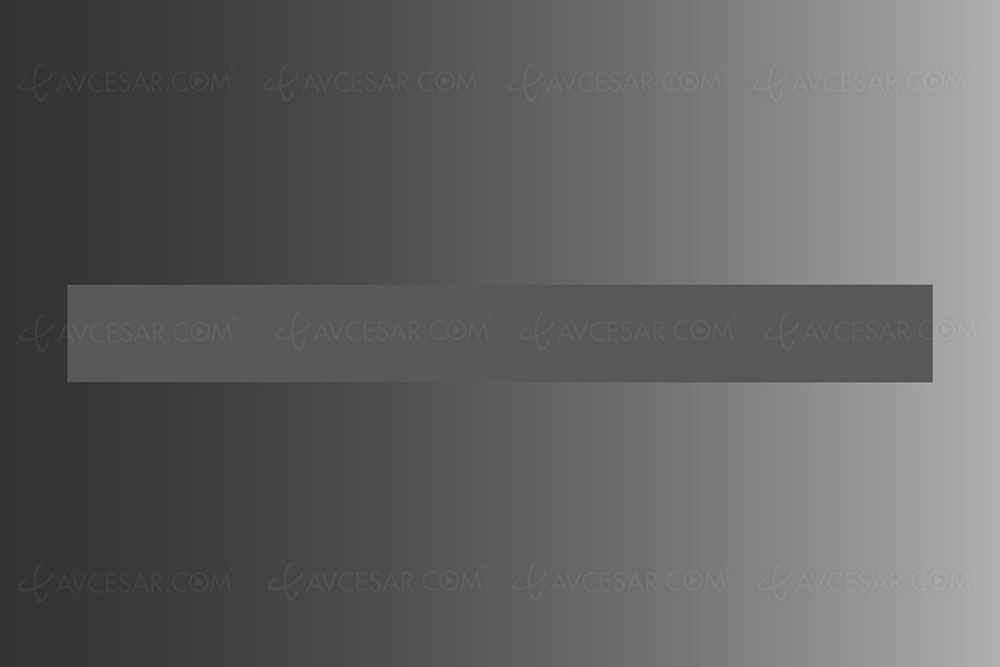 Namely, the new version of The Medialight MK2 Flex is now available in several lengths, from 1 m to 6 m (see table below), ideal to be associated with the diagonals of increasingly large televisions. The installation is extremely simple: you simply stick it to the back of the TV and connect it to the TV via one of its USB ports. 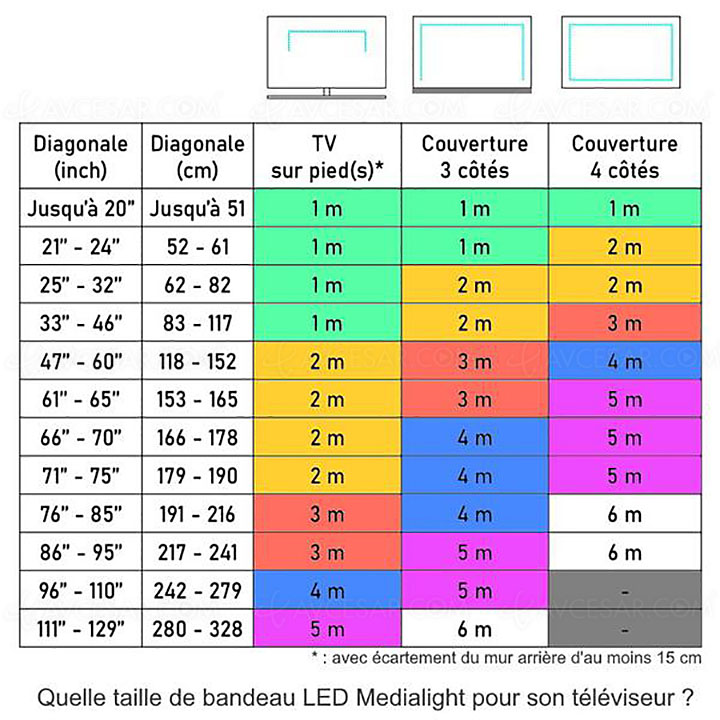 Namely, a remote control accompanies The Medialight MK2 Flex in order to precisely adjust the intensity of the light halo, knowing that for optimal efficiency (elimination of eye fatigue and perfect perception of the colors displayed), the latter must correspond to 10% the brightness of the TV. Don't panic… a dedicated video is also provided to learn how to fine-tune the 10% threshold by eye, or very easily. 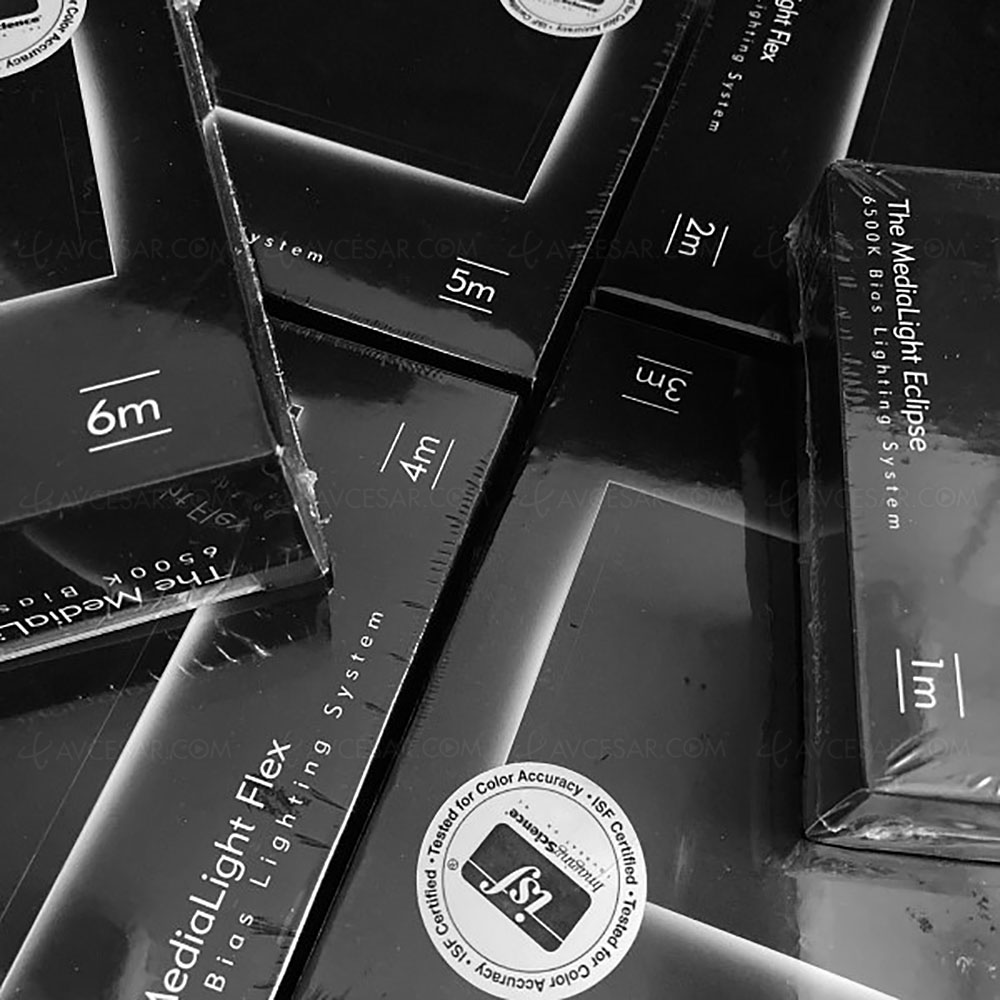 To try it is (really) to adopt it

Believe us, once The Medialight MK2 Flex is installed, viewing comfort is immediately noticeable. We speak to you knowingly, we who spend many hours in front of our televisions, profession obliges. No more itchy, weeping eyes or headaches. The icing on the cake, for those who would have used a calibrator to take advantage of the full potential of their television, The Medialight MK2 Flex allows you to make the most of it with full colorimetric respect for the calibration.

If these products interest you you can order them directly from the French distributor by clicking on the following link: 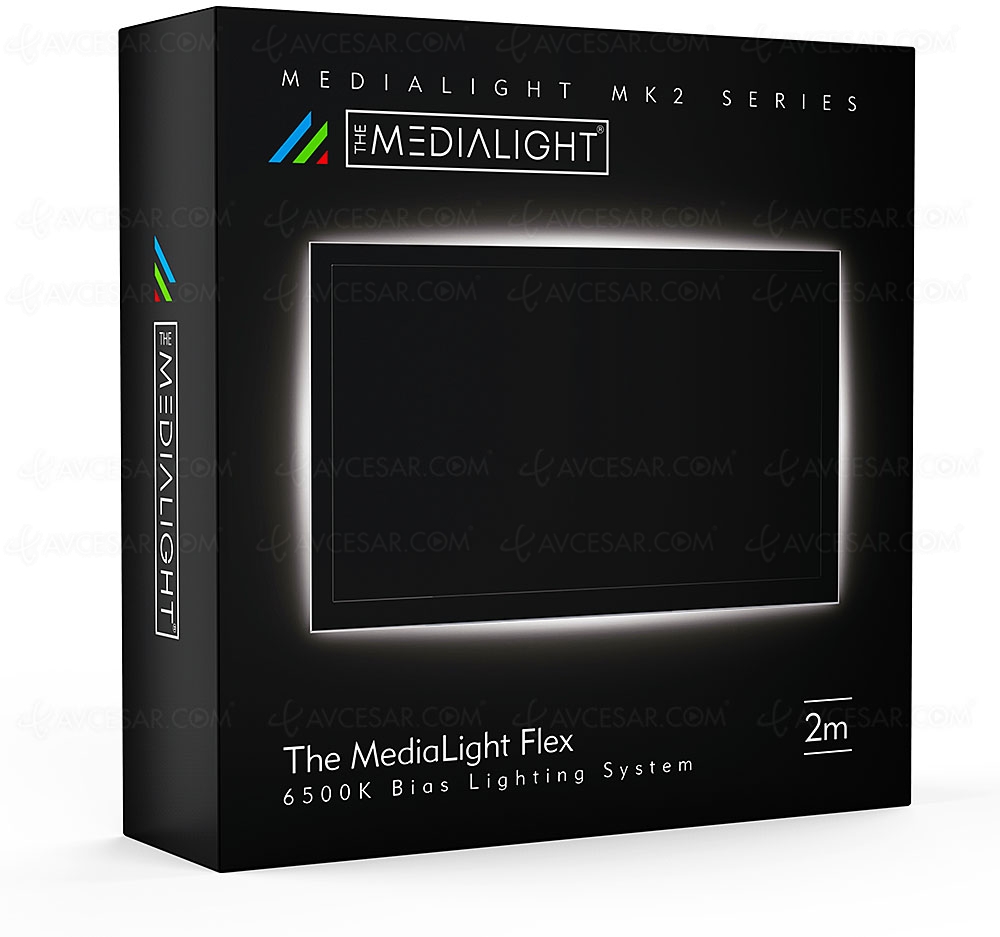