In addition to the Samsung QN800A series intended to democratize Ultra HD 8K technology, the Korean manufacturer announces the Samsung QN750A TV series with the objective of offering 8K Neo QLED TVs, either based on a Mini LED backlighting system, always more affordable. 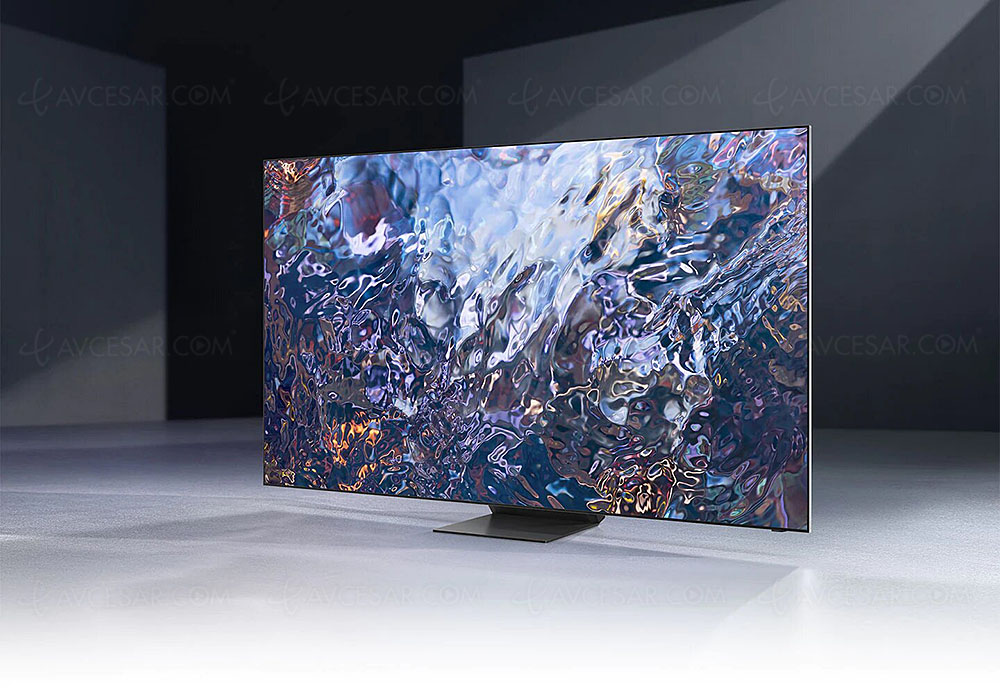 To put it simply, these TVs offer almost all the equipment of the Samsung QN800A specimens, with a few major differences (click on the following reference for the full review of the Samsung QE65QN800A model by the AVCesar.com editorial staff) , which allow the Asian manufacturer to reduce costs, and therefore indicative prices. The main changes concern the 50 Hz LCD panel (and no longer 100 Hz) and the Neo Quantum Processor Lite 8K processor (limited to the display frequency 60 Hz and not 120 Hz). The rest of the technical characteristics are unchanged. 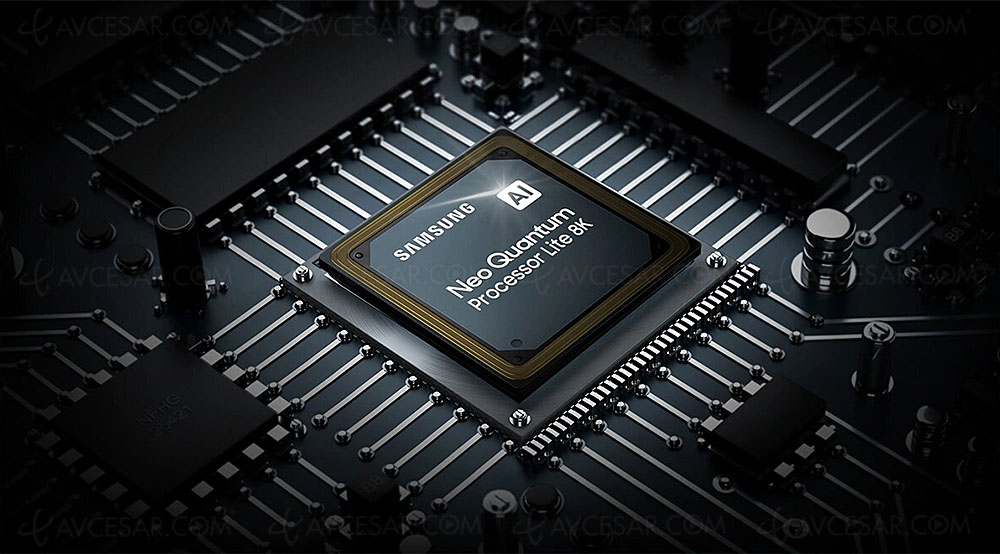 As a reminder, for the 2021 Samsung TV series, the Neo QLED designation indicates the presence of a Mini LED backlighting system (see our CES 21 news> Samsung Neo QLED with Quantum Mini LED and Quantum Matrix). As on the QN800A models, the luminous peak is announced at 2000 nits and the fluidity index at PQI 4700. There is also an OTS + audio system (against OTS Pro), an extremely thin screen border and a One Connect box. . 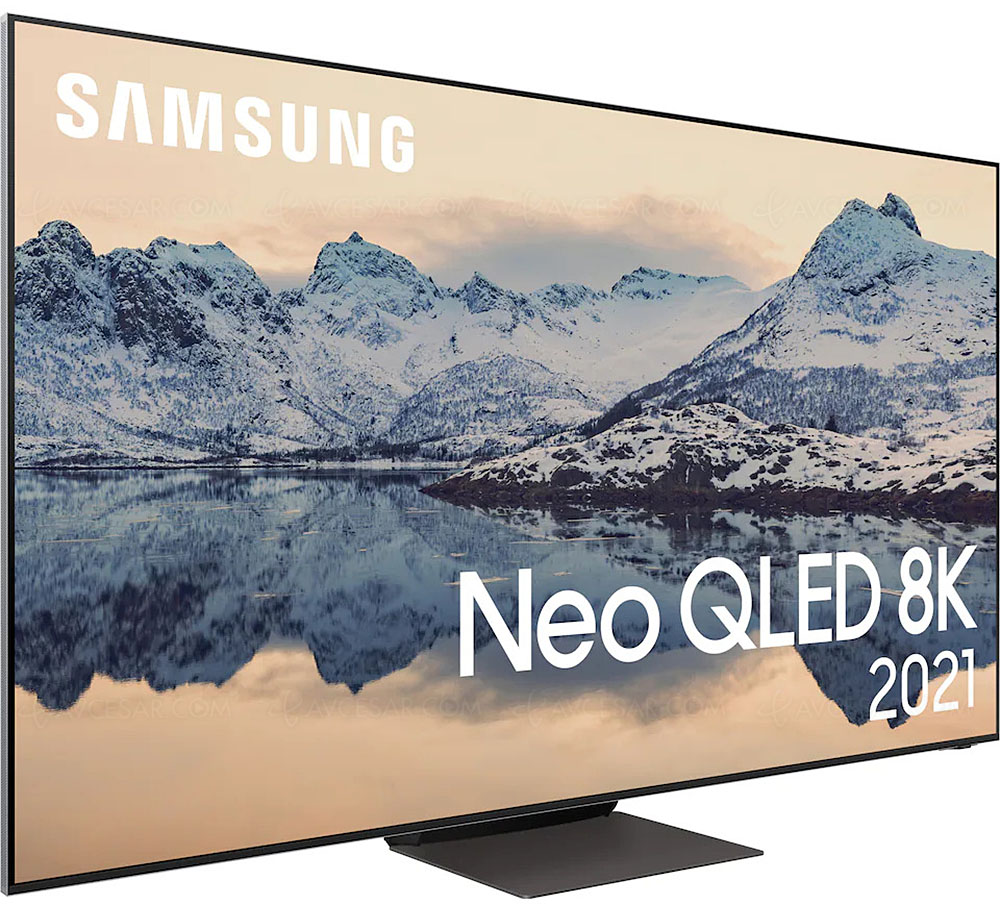 The year 2021 is marked at Samsung by a new generation of One Connect box that is much thinner and designed for perfect discretion (it looks like an ultra-thin Blu-Ray player). But there is another very interesting feature of the new One Connect: if the latter can be remote from the screen for better ergonomics of the audio-video installation (the sources can thus be placed / stored in a place other than the television for total freedom of arrangement with, for example, a wall mounting of the screen), it can also, on the brand's 8K TVs, be clipped to the back of the TV stand (see photos below), in adequate housing, to disappear completely. Smart and practical. 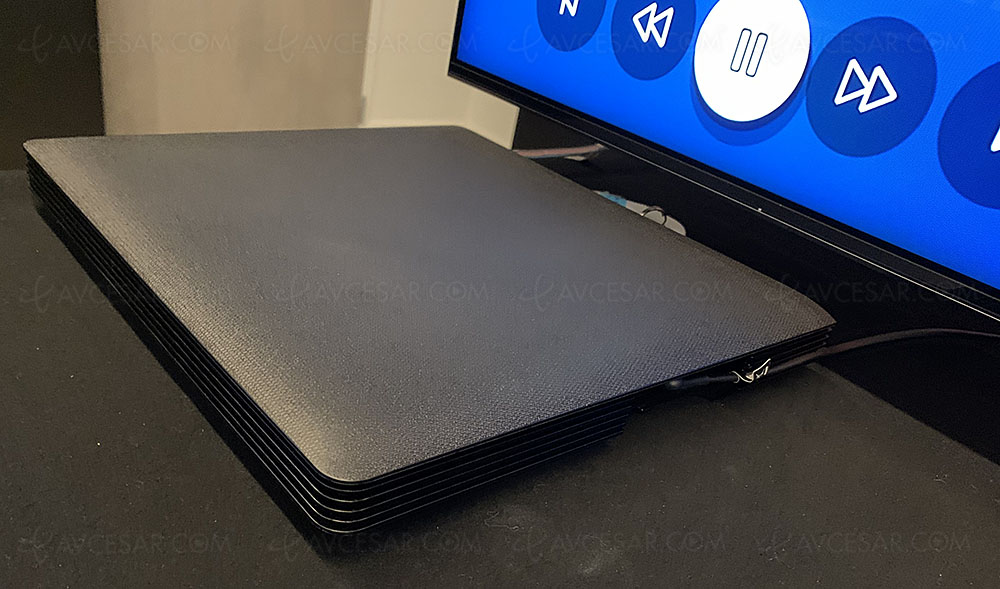 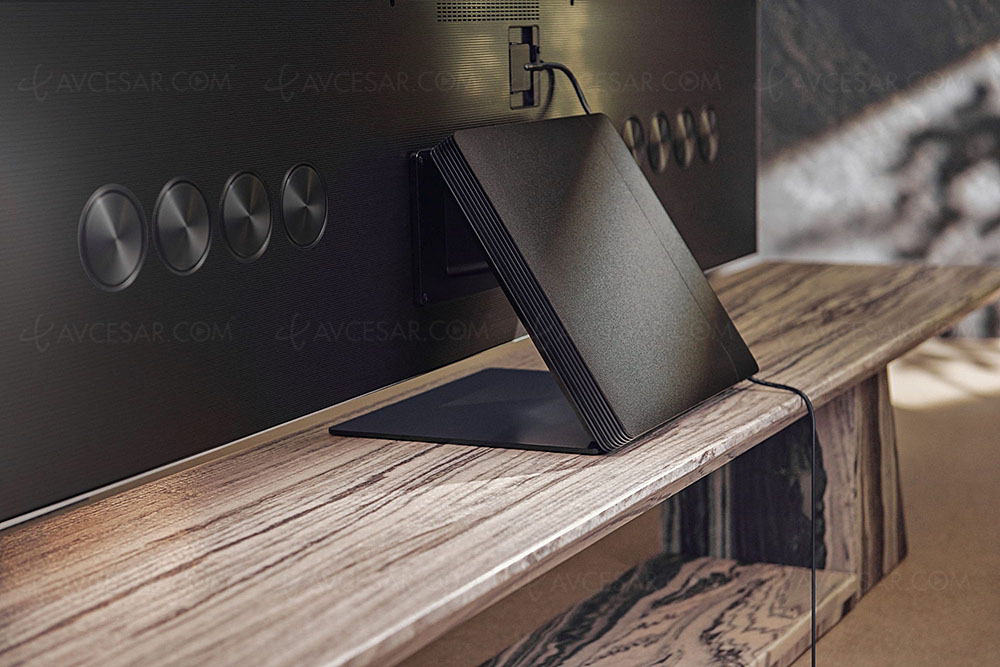 In terms of specifications, the Samsung QN750A 8K Ultra HD QLED TVs include a 10-bit VA-type LCD panel and, as already specified above, a Neo Quantum Processor Lite 8K processor. As for the 2020 televisions, this mixes Machine Learning process and Deep Learning process. As a reminder, the Deep Learning process is based on a neural model, either without human intervention (unlike Machine Learning) in the learning of the processor. This one decides all by itself of the evolutions necessary for the algorithms of image processing to find an optimum quality starting from a degraded display.

Still on the subject of Upscaling, Samsung announces the integration of AI ScaleNet technology intended to reduce the loss of quality of a signal coming from a streaming service. Namely, Amazon Prime Video will be the first platform to implement this technology, in collaboration with Samsung. There is of course a controlled Banding phenomenon and a reduction in the judder phenomenon. Likewise, the Adaptive Picture function now adjusts the brightness but also the contrast (and this is new) of the TV according to the ambient light.

Regarding the quality of the blacks displayed on the screen, the new Mini LED backlighting system developed by the brand's engineers (see our Samsung Neo QLED TV news: zoom on Quantum Mini LED and Quantum Matrix) has several thousand diodes and 1,500 zones (info probably related to 75 ''). In addition to the switch to Mini LED technology, Samsung is therefore announcing better electrical management of each of the areas of the backlighting system and optimized management of light leaks. As explained in our news on the Quantum Matrix process, the latter allows fine management of the amount of current sent to each of the LEDs (Local Power Distribution) for an even more abysmal rendering of blacks and even brighter whites, on very small surfaces, for tenfold shine effects. Regarding light leaks, their perfect management has the consequence of eliminating the Blooming phenomenon. These are more than interesting elements for an unprecedented HDR experience, knowing that the QN750A displays support HDR10, HDR10 +, HDR10 + Adaptive and HDR HLG. 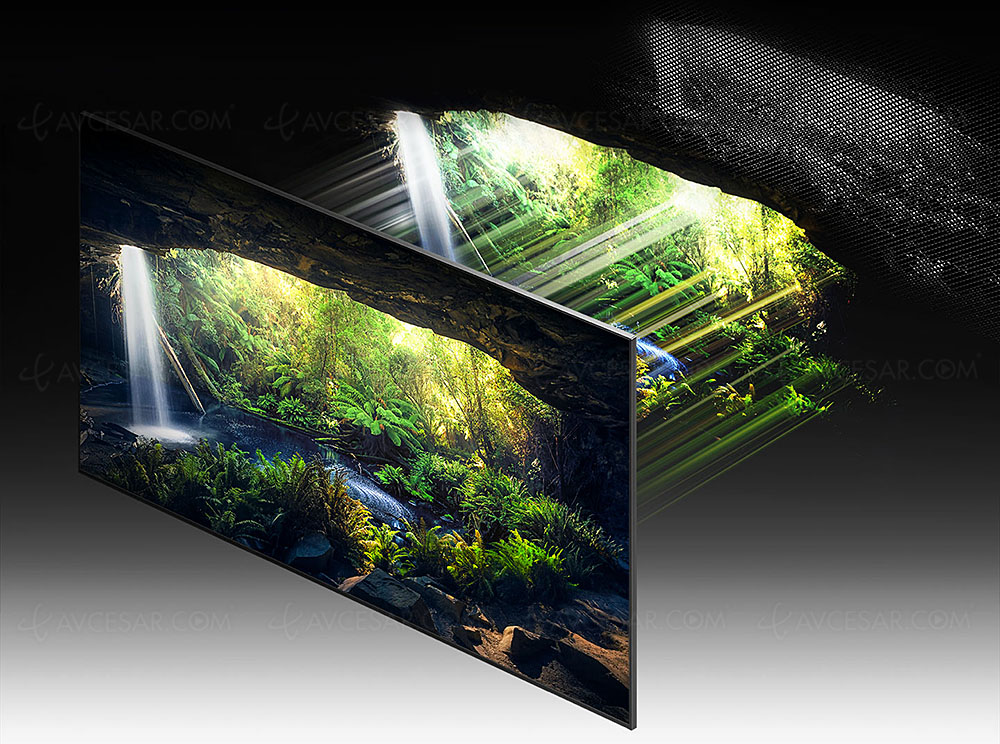 Of course, the LCD panel with its QLC (Quantum Light Control) coating, with an extremely low reflectance index (reflections are almost non-existent) and a wide viewing angle via Ultra Viewing Angle technology Technology, inaugurated in 2019, is still in place in 2021. And this is a very good thing because its efficiency had amazed us.

The sound section is also in the spotlight on the Samsung QN750A TVs. We find the OTS + system which has a total of eight HP (system 4.2.2) for a total power output of 70 watts. The sound is diffused according to a dispersion grid which runs all around the screen (see second photo below, click on it to zoom). The purpose of the OTS + system is to "stick" the sound of objects to their movement in the image for better realism (see second photo below). 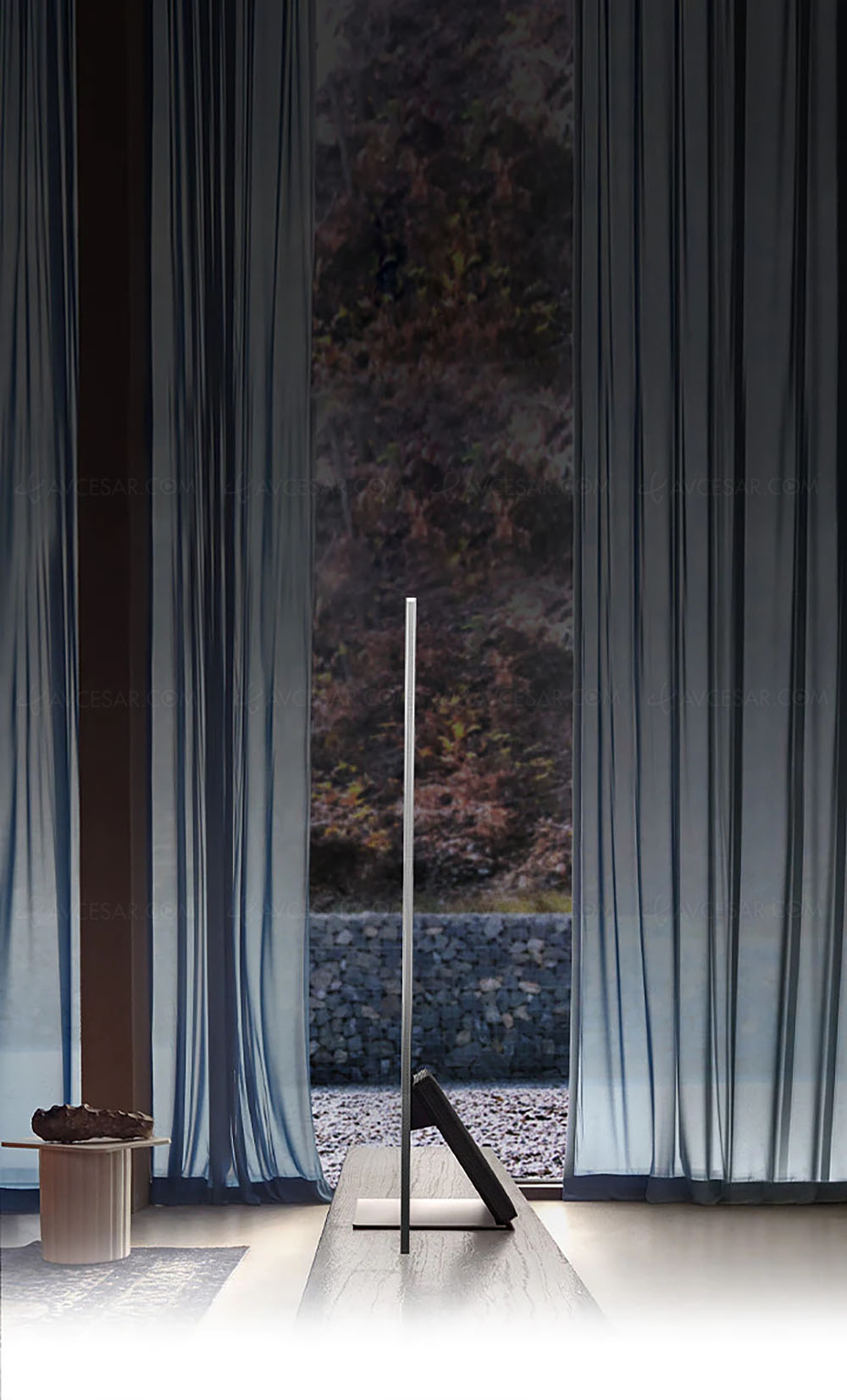 SpaceFit Sound is a new feature. Evolution of the automatic audio calibration system already present on Q700T TVs in 2020, it is more powerful here. The TV sends a succession of sound messages and analyzes their frequency response, echo and return speed to perform the optimum acoustic treatment depending on the room.

For the rest, we find the Q-Symphony function which consists, in the presence of a Samsung Q Series 2020/2021 sound bar connected, to take advantage of the TV speakers in addition to those of the sound bar to magnify sound reproduction, its scale and spatialization. In fact, until now, when a sound bar is connected to a TV, the speakers of the latter are then disconnected. With the Q-Symphony system signed Samsung, they remain active and participate largely in the perceived audio improvement with a configuration until 11.1.4 depending on the connected soundbar. And the demonstration we witnessed truly demonstrates the efficiency of the process and its relevance. 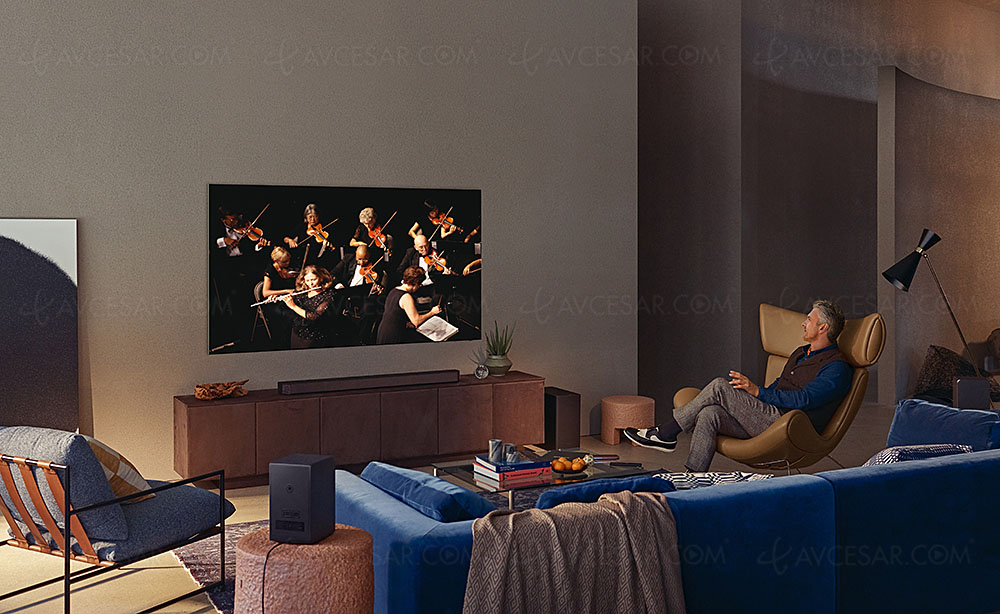 And if the Adaptive Sound function, capable of adapting the audio settings of the TV in real time according to the displayed image, the AVA (Active Voice Amplifier) function is still required. The latter is intended to automatically cover new noise in the TV environment. For example that of a kettle or a vacuum cleaner which will be covered by an increase in volume managed directly by the TV. Don't panic, the TV turns down the sound, always automatically, when the noise stops.

Another improvement, the Samsung QN750A 8K Ultra HD QLED TVs offer the simultaneous display of two contents with the MultiView function through as many windows on the screen: the first with the signal of a TV channel or one source connected to the TV, the second to the user's smartphone screen, or from a game console or the Internet. There are many display possibilities, from classic PIP to having two adjacent windows.

Good point, the HDMI 2.1 standard with VRR, Freesync Pro, ALLM, 8K / 60, eARC compatibility is required on the four HDMI inputs. And to engage the Mirroring mode between a Samsung Galaxy smartphone and a Samsung QN750A TV, using the Tap View function, touch the second with the first and you're done.

In 2021, the Tizen interface switches to version 6.0 for ever more advanced ergonomics. The Bixby voice assistant is still available, as is Google Assistant and Amazon Alexa. And it is possible to easily switch from one to the other via the menu. Likewise, the Samsung QN750A series is compatible with the AV1 codec. On the connectivity menu, we must mention the Wi-Fi 6 function (8K requires), Bluetooth and AirPlay 2 compatibility plus many communication features (Google Duo for example for video calls) or the possibility of working on these documents Microsoft via the Cloud on the TV screen. There are also 21/9 or even 32/9 display modes for video game enthusiasts with the connection of a PC ... Not to mention a solar remote control to never have to change the batteries, in addition to preserving the planet .

Reminder of the key features of Samsung QN750A TVs:

• Inputs: 4 HDMI 2.1 including one with eARC function, three USB Host ports compatible with Fat32 and NTFS , an Ethernet port plus a CI + port and Canal Ready certification

• Other: Ambient mode, One Connect One Cable box (only one cable between the box and the TV with support for the power supply) 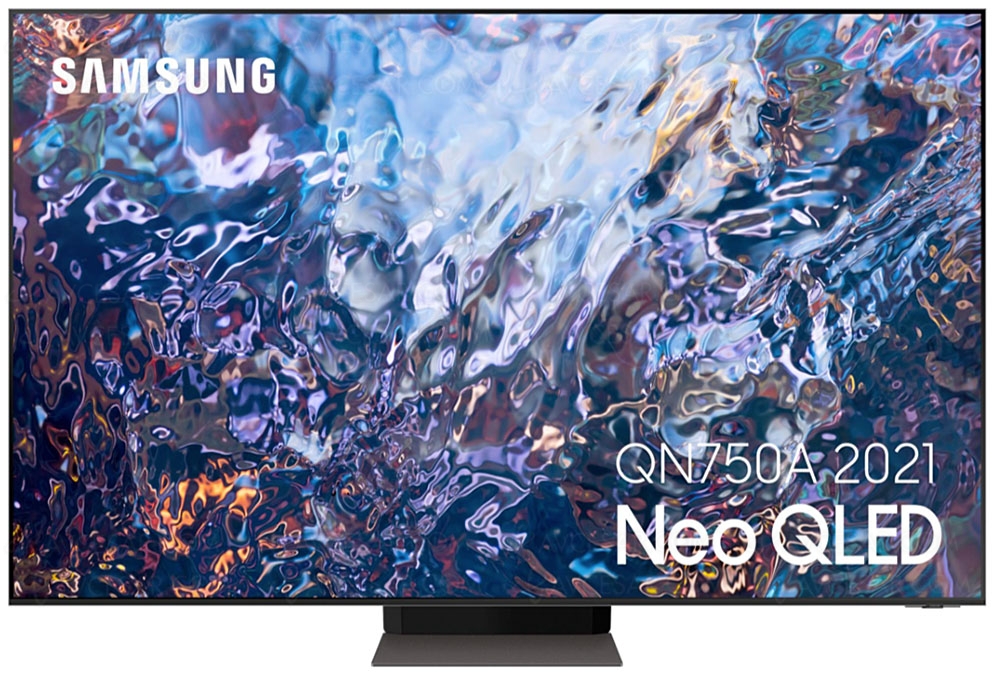